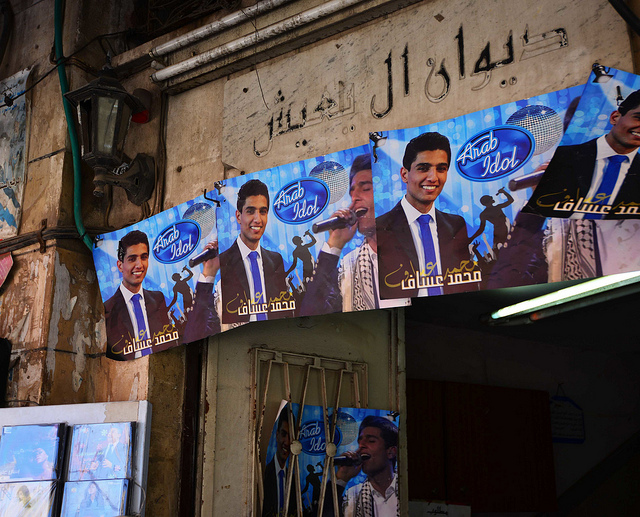 Mohammad Assaf became the first Palestinian to win Arab Idol last summer, making him a potential spokesperson for national unity.  While his musical talent has launched him into the spotlight, the 23-year-old sensation refuses to be politicized.

After winning the second season of the American Idol spin-off, massive celebrations erupted in the streets throughout his homeland, including Gaza, East Jerusalem, and Ramallah. The participants exclaimed their adorations for Assaf’s smooth voice and charming smile, but they also embody a war-torn population in need of a peaceful representative for the Palestinian cause, allowing them “to feel as one people, forgetting at least for a while their political and geographical split”.

Assaf garnered many fans during his tenure on Arab Idol, winning the competition by more than a million votes.  One phone company, Jawwal, offered discounted text message fees and confirmed that 8 million votes had been cast for Assaf out of Gaza alone; a staggering number to come from a population of 1.7 million people.

But not everyone was a supporter of Assaf’s ambition.  The competition was completely rejected by some, asserting that its title “encouraged idolatry,” while Hamas, the governing body in the Gaza Strip, blocked the installation of a large screen in Gaza’s main strip where fans of the show hoped to watch the finale together.  One professor from Al-Azhar University in Gaza stated, “Hamas considers this kind of art as being against Islam and religious culture,” and thus ignored the competition entirely.

Assaf does not have any delusions about what his success means for the conflicted country, nor does he intend to become a spokesperson for any political organization involved with the present conflict.  “Regardless of the political differences, in the end we are all Palestinians, and we all have the same goal – to free Palestine… No-one will ever politicise [sic] me, and no party will ever take me to its side,” he said.

Instead, he prides himself on what he has achieved for the people. “I didn’t free Palestine,” he said, “but I gave some happiness.” For some residents of Palestine, he has done much more than this – he has opened the door to a new view of Palestine and its cause.  Two residents of Ramallah, Mohammed Omar and Imad Rabee, agree that Gaza’s image has taken a new shape since Assaf’s victory. Instead of being instinctively associated with “rockets and bombs and stones,” an artful culture of music has emerged.

Assaf’s passion for music and his unwavering faith in the power it possesses are symbols of a new, more youthful movement; one that emphasizes peace and unity.  In an interview with Al-Jazeera, Assaf said that “music is a tool for revolution and struggle…as young Arab people, we stand with freedom and democracy.  Let the youth lead this period.”  Young or old, Assaf understands that all Palestinians want the same thing – freedom.  Through his music and with his notoriety, Assaf hopes to project a greater message – as one people, let us end the split.