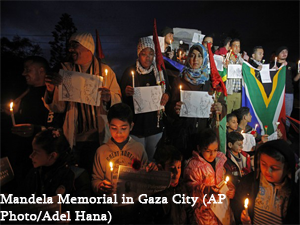 The death of Nelson Mandela, the face of the South African resistance to white colonial domination, the man who helped build a nation after a grassroots uprising against apartheid and systematic oppression, ushered in a period of mourning and a deep sense of loss in the international community. We lost one of the most important revolutionaries of our time. Someone truly devoted to the struggle for equality and justice – not only for his own people, but the freedom of Palestinian people as well.

Mandela’s solidarity with the Palestinian people in their struggle for self-determination was not conducive to his popularity in the west, nor in the western media. In a 1990 Nightline town hall meeting with Ted Koppel, Mandela responded to criticism that his stance on Israeli aggression (in light of the First Intifada) alienated the South African Jewish community by first acknowledging the importance of the Jewish community in the makeup of South African society and government, while remaining firm in his distinction between Judaism and Zionism. While the rights of Jewish South Africans were essential to an inclusive state, Mandela was firm on South African solidarity with the Palestinian people. These principles are not mutually exclusive. In response to the claim of Henry Siegman, then-Executive Director of the American Jewish Congress that Mandela’s solidarity with Palestine Liberation Organization Chairman Yasser Arafat suggested a “certain degree of amorality”, Mandela maintained that, “Arafat is a comrade in arms”. This, along with his Marxist leanings, is the part of Mandela’s legacy that political powers today conveniently leave out – it is historical revisionism at its finest. It comes as no surprise that Mandela was on a US Terror Watch list until 2008.

Fast forward to December 5, 2013, the date of Mandela’s passing. As the world mourned, the communication teams of public officials scrambled. I could not contain my frustration as I listened to President Obama’s remarks on Mandela’s passing. The President remarked, “We will not likely see the likes of Nelson Mandela again”. Nelson Mandela was the epitome of an effective resistance leader. Mandela took orders from his people – he took orders from the ANC, rather than dictate orders to others. This is most certainly a unique trait in a leader. However, I couldn’t help but feel frustrated as each well-intentioned commentator, literally one after another, made more remarks to that effect. I wish I could ask these news commentators, “If Palestinians had their own Mandela, how would you cover him/her in your reports?”. I already know the answer to this question. It reminds me of the critics of Palestinian resistance, who recommend that “what you Palestinians need is a Gandhi”.

If you rely on western media sources alone for your news, you probably haven’t heard of the Palestinian hunger striker movement of late 2012-early 2013. Hana Shalabi was arbitrarily imprisoned by Israel with no criminal charges and no trial. The Israeli government calls this program “administrative detention”. Hana Shalabi was non-violent in her approach, just like Gandhi. Hana went on hunger strike for 43 days. Where was the international media coverage of Hana Shalabi’s strike?

When I hear the recommendation that “Palestinians need a Mandela”, I think to myself where our Mandela might be right now. Is he being held in administrative detention? Is she struggling to survive this brutal winter in Gaza, with unprecedented snowfall, no electricity and very little fuel for her family to keep warm, let alone feed themselves? Is our Mandela one of the 193 children imprisoned by Israel this year? Or, was she one of many Palestinian children assassinated by Israeli snipers this year? Was he killed in a white phosphorous attack during Operation Cast Lead in 2008? Was she killed as Israel demolished her home in Gaza? Was his family displaced as Israel destroyed their home to make way for illegal settlements in the West Bank?

Obama takes pride in his participation in the international movement against apartheid in South Africa. However, it is evident through his policies that Mr. President has missed the point.

In following Mandela’s example, we must, “make decisions guided not by hate, but by love”, the President remarked in his memorial statement. I ask, where is the love in your drone policy, Mr. President? The policy that lead to the killing of 15 people attending a wedding in Yemen last week. Why? Because they looked like terrorists. This is hate, Mr. President – plain and simple.

Obama also called upon Americans to, “strive for a future that is worthy of his sacrifice” in his memorial of Mandela. I ask, how much more should the American people sacrifice to feed the defense budget, the $3 billion a year in military aid to the Israeli apartheid state? With this warped sense of morality, it comes as no surprise that Obama found taking selfies to be an appropriate activity at Mandela’s memorial service.

Someday, we will have our Mandela. Our Mandela will wear a kuffiyeh. Our Mandela might wear a hijab.  Their name will be found on a terror watch list. Arab/Muslim Americans with similar names will be racially profiled in airports, and subject to questioning before boarding flights. Politicians and pundits will speak of our Mandela with disdain and suspicion. They will be a voice of resistance and reconciliation, achieving the seemingly impossible – righting historical wrongs with pragmatism. They will establish a bi-national state where, to quote Palestinian journalist Ali Abunimah, “equality for all, rather than the supremacy of some” is protected under a system of one-person, one vote. This will be a system where historical Jewish ties to the Holy Land are respected just as much as that of the Muslim and Christian populations of Israel-Palestine. They will have the pragmatism of Mandela in striking a balance between reconciliation, the Palestinian refugee right of return, and the human rights of each Muslim, Jewish, and Christian coexisting in a shared land.

Like Mandela, the Palestinian Mandela will challenge the world to think the unthinkable. Someday, our Mandela will be the face of a popular grassroots movement. It will have been a long time in the making. Our Mandela will help take our movement from the margin, and will help make the transectionality of our cause with that global struggle for human rights clear. Someday, our Mandela will lead us to freedom, equality, justice and a just peace. Israel-Palestine will someday be the bi-national state “at peace with itself” like Mandela’s post-apartheid South Africa. And someday, the powers that be will give our Mandela the respect that he – or she – deserved all along.