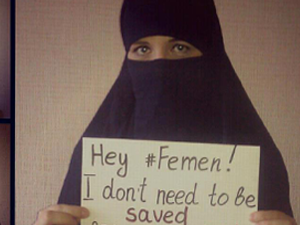 FEMEN, an ultra-feminist organization based in Ukraine, aims for a “complete victory over patriarchy” through topless protests. Their main goal is not to be liked, but to promote sextremism – “a non-violent but highly aggressive form of provocation.” While the women of FEMEN are fighting against the oppression of women in dictatorial regimes, they have also spoken out against the treatment of women in Islam, suggesting that Muslim women need to be saved from the oppressive nature of their religion. Or do they?

The issue is that FEMEN has misinterpreted the signs of oppression. Notably, the group takes great efforts to “liberate” Muslim women from the Hijab, or headscarf, and more importantly, Islam. FEMEN’s purpose may be to free women from patriarchal religions and policies, but they ignore that many Muslim women cover their heads and bodies as a religious choice. In so doing, FEMEN projects its ignorance to the values of the religion to which its female followers choose to adhere.

Several women have taken to Facebook to argue against FEMEN’s stance on Islam. In response to the “Topless Jihad Day” instigated by FEMEN in April, Muslim Women Against FEMEN began their own campaign against the bare-breasted protestors, speaking up for Muslim women “who want to expose FEMEN for the Islamophobes/Imperialists that they are.” Muslim Women Against Femen “argue that FEMEN’s members do not speak in their name, nor does the group’s message advantage Muslim women’s plight,” explains Eline Gordts in an article on Huffington Post.

Lila Abu-Lughod, an anthropology and women’s studies professor at Columbia University, further addresses the misconceptions of Islam as purported by FEMEN. In her article on the matter, Abu-Lughod explains that there needs to be an accurate representation of what is truly oppressing the women of Islam.

FEMEN follows a common misunderstanding of Islam, suggesting that the religion itself defames and strips women of their rights. Abu-Lughod instead poses the argument that women are getting unequal and unfair treatment from enacting governments and social structures all around the world. She believes that Muslim women are actually being more oppressed when being defended and “saved,” because it is done by people who “feel…it is morally right to intervene in the lives of women they perceive to be so different and so separate from themselves; ignoring the persistence of gender inequality.”

This seems to be the case with FEMEN. Its members, whether intentionally or ignorantly, ignore the capacity and the context of their personal struggles as human beings facing inequality. Abu-Lughold makes a valid point on using the Muslim state of chaos as the outside world’s pawn to make political gains for their own interests, including the perceived oppression of the Muslim female.

[As a Muslim woman, I am considered to need saving by FEMEN, or any other organization that is supposedly “freeing me”. I don’t find the implications of my so-called oppression due to my religion to be valid. Everything I do with my religion is due to my own choice; having someone tell me what my choice should be is the actual oppressor, not my savior.]