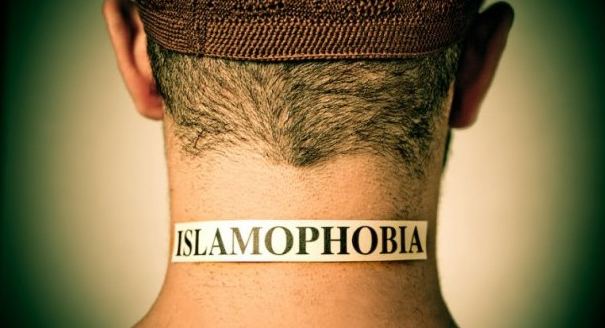 Last September, days after the anniversary of 9/11, Nina Davuluri, the Indian-American ‘Miss New York’, was crowned Miss America. The aftermath:

As the Miss America results show, Americans are willing to label anyone with dark skin a terrorist. #racism http://t.co/8gBK6MMYL7

Racism and bigotry—have we ever discussed, ruminated about, or acted against it?

When we glance inside our own heads, can we be certain that we are not, in fact, contributors to the problem? Addressing racism is often unsettling, which may be the reason why so many Americans opt to ignore the problem, avoiding the ‘r’ word altogether. The media has done too well a job planting seeds within our minds, creating prejudiced views within a blink of an eye. African-Americans in baggy clothes shown through mug shots and behind guns as if it were their natural habitat. Muslims donning beards and bombs, as if one implies the other, destroying lives in the name of Allah. Women in veils depicted as if oppressed by a domineering and patriarchal religion. But African-Americans are not barbarians, and true Muslims, regardless of gender, embody peace—the core virtue of Islam.

On February 26, 2012, George Zimmerman shot and killed Trayvon Martin in self-defense as Martin was on his way home in Sanford, FL, armed with a bag of skittles and iced tea. He was 17 years old, an African-American student at Michael Krop High School. One month later on March 21st, Shaima Alawadi was beat to death inside her home and left next to a note that read, “This is my country. Go back to yours, terrorist.” She was a 32-year-old mother of five who had left her country, Iraq, with her family following the Shiite uprisings, in hopes of finding peace in El Cajon, CA. These two now-lifeless Americans represent the true victims of America’s inherent racism and prejudice.

We must then think to ourselves: what was their crime—the color of their skin (i.e. their darker than white complexions), their ethnicity, their beliefs?—and when will the hate end. 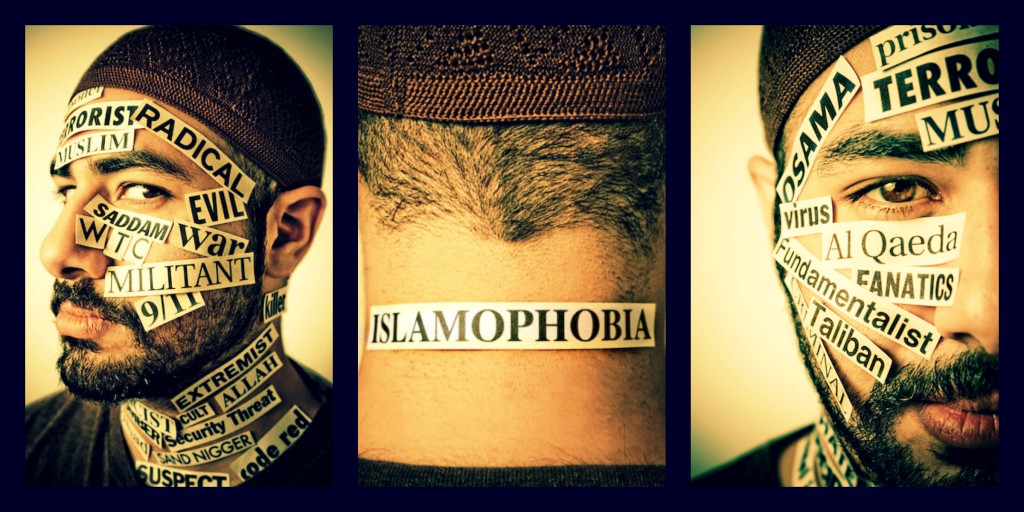 A hate crime may stem from a number of matters, such as sexual orientation, gender, religion, mental and physical disability, racial group, or ethnicity/origin. According to the Federal Bureau of Investigation, there were 5,790 single-bias incidents of hate crimes in 2012. 48.3 percent of them were motivated by racial bias, 19 percent by religious bias and 11.5 percent by ethnicity/national origin bias. 78.8 percent—nearly 80 percent of hate crimes are motivated by the appearances, backgrounds, and beliefs of others. It should be duly noted that these are only the hate crimes that have been reported and do not account for the ones left unseen.

The first amendment promises no jurisdiction over religion and the Civil Rights Act proclaims that “citizens, of every race and color… shall have the same right, in every State and Territory in the United States… as is enjoyed by white citizens.” Yet it is saddening how both religion and race are the basis for so much hate in every State and Territory in the United States, to this day. In 2001, after the horrific events of 9/11, “anti-Islamic religion incidents… became the second highest reported among religious-bias incidents,” as stated by the Federal Bureau of Investigation, “growing by more than 1,600 percent over the 2000 volume.” Nearly twelve years later, we are still in the midst of Islamophobia.

However, Martin and Alawadi’s death sparked rallies and gatherings across the nation, starting as soon as March 25, 2012: 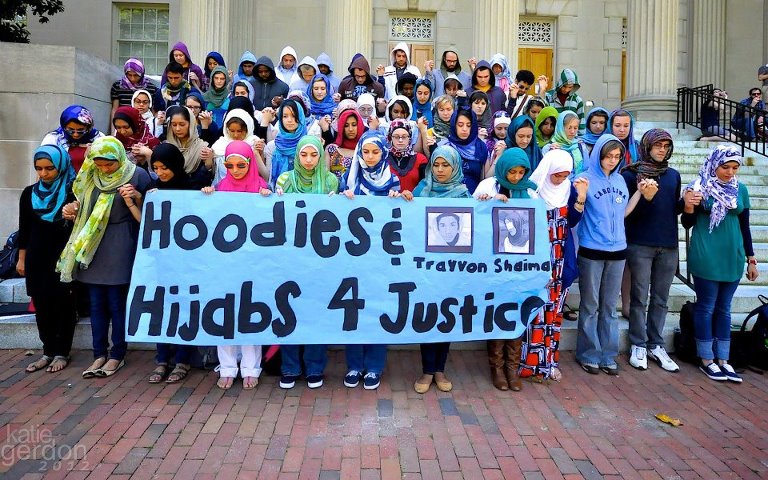 Students from various universities bore the title Hoodies and Hijabs across their chest and throughout their campuses not only for Martin and Alawadi, but to shed light on the proliferation of intolerance and hate in America and the justice that has not yet prevailed. These events grounded themselves in interfaith dialogue with students from various backgrounds and religious affiliations participating, all hooded and with hijab. Students from all walks of faith came together in solidarity for the racial and religious injustices that have continually affected lives throughout America’s history.

Alawadi’s husband, Kassim Alhimidi, is suspected for her murder, and her case may undoubtedly be one of domestic violence. However, Hoodies and Hijabs stands for those victims who go unnoticed every day. Those who are stuck in the dark corners of their isolation and left without a voice. My point, and the point of the hundreds of hooded hijabs, remains intact. In order to eliminate ignorance and bigotry in our country, we must come together and turn our individual voices into one loud, resounding roar. We do not have the luxury to wait for racism to make the first move—we must take action and acknowledge prejudice and hate the moment we see it, hear it, or even give in to it. It should not be the hijab or the hoodie but rather the choices we make that define who we are and determine where we end up in life.

It’s about time we learn to coexist, because terrorism has no name, no roots, and no color. Even if it had a name, it most certainly would not be Khan. Quite frankly, it would not be seen carrying a bag of skittles, either. 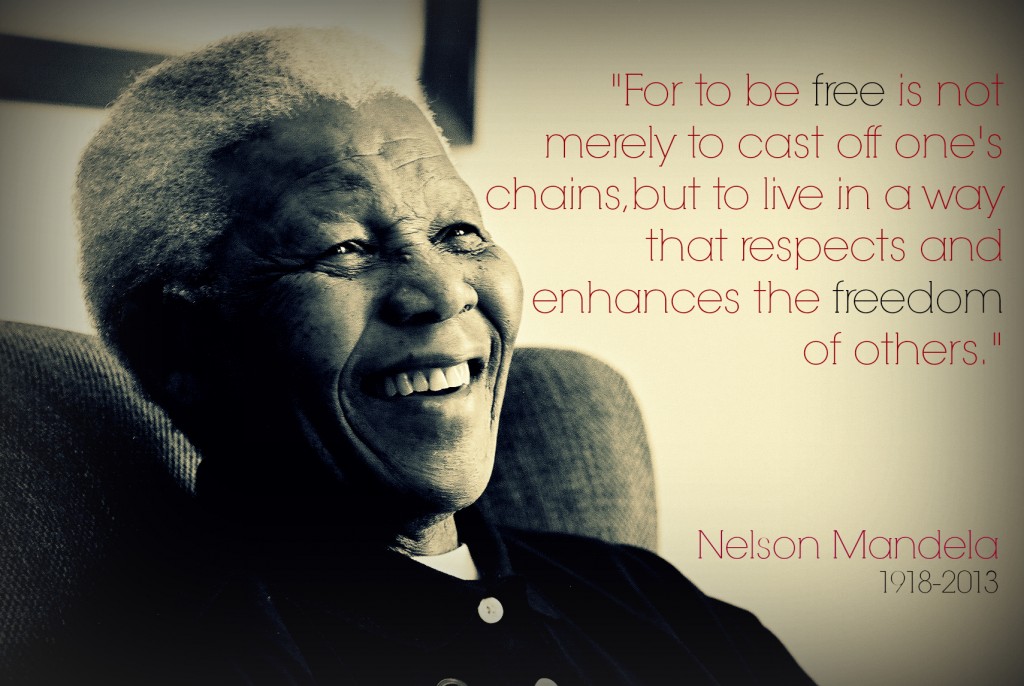