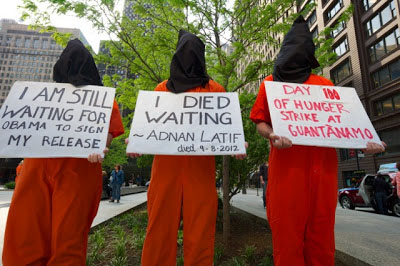 Two very important events will take place in Chicago on January 10 and 11, 2014.

Timed to coincide with the 12th anniversary of the establishment of the Guantanamo Bay Detention Center, a vigil will be held in Federal Plaza (Adams and Dearborn) beginning at 4:30 p.m. on Friday, January 10; and an evening of dramatic interpretation and followed by a panel discussion will take place Saturday, January 11, at Grace Place (634 South Dearborn).

Both events have been organized by a diverse group of individuals and organizations who have worked steadily over the years to advocate for justice for detainees at Guantanamo, and to educate the public about the larger problem of islamophobia and stereotyping. (See Chicago Coalition to Shut Down Guantanamo)
These events are part of a series of events taking place nationwide, with the focus on a fast and march in Washington, DC.

As I have written in two recent blog posts, a small number of releases of Guantanamo detainees have taken place. The way this is being presented by the Obama administration, and covered in the media, distorts what is really happening, and the whole meaning of Guantanamo. The administration evades the fact that only 8 of the remaining 155 men at Guantanamo were ever charged with a crime, and that certainly the rest should never have been there at Guantanamo in the first place. Instead, the way the “resolution” of the Guantanamo fiasco is being handles encourages Americans to think, “I don’t know the details, but those guys must have been troublemakers . . . .” (See A Modest Proposal: Resettle the Guantanamo Detainees in Chicago ) The suggestion, even to knowledgeable justice activists, seems to be, “One could continue to point out all the unjust things about this situation, but what would be the point? We’re just lucky these guys — at least some of these guys — are finally being released.” (See US to its Humans Rights Violations Victims: “Shut up and take what you’re given!” )

In contrast, I encourage everyone to re-double the efforts for full justice for the Guantanamo survivors: release, yes, PLUS restoration of civil rights, recuperation and treatment, review (legal remedies against perpetrators of illegal detention and torture, and support for re-entry. Please join us on January 10 and 11 to be part of that effort!