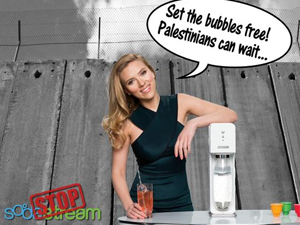 Interestingly, there seems to be a stigma when it comes to women in the media industry, where ideals are taken for face value and the reality is hidden underground and erased from the populations conscious. Notably, the famed “Avengers” actress Scarlet Johansson is a textbook example of this scenario. She is a prominent actress, having recently starred in the movie “Her” directed by Spike Jonze, and is recognized as beautiful. To add to her great resume, she was, until recently, a member of a humanitarian group Oxfam, who condemn any breaking of international laws, especially when those laws dealt with human rights, and specifically having a position of disagreement with illegal Israeli settlements.

Recently, however, Johansson has dissolved her position with Oxfam in favor of becoming the “Global brand ambassador” for the company Soda Stream, a do-it-yourself home carbonated beverage system. Importantly, the factory is stationed in the West Bank of Palestine, on an illegal settlement made by the Israeli government, and illegally forcing Palestinians to work in the harsh factory environment, leading to controversy behind Johansson’s change of heart. This action poses a very big question, one that might be challenging to answer: Why do people continue to look up to individuals such as Johansson amongst all these controversies they are stirring up? Why is it that as long as a prominent actresses have artistic gifts, their political ideologies can be avoided and even ignored?

There is a constant adoration of those who are considered celebrities- especially women and young girls-to the consumers of mass media, with no considerations of their faults or their impractical ideologies. For example, a prominent singer, Beyoncé, made her stance as a feminist in her new song titled “***Flawless” featuring part of a speech by prominent African American feminist Chimamanda Ngozi Adiche, yet she performed a song advocating sexual assault on the Grammys. The dissonance of her performance proves there might be a detail or intention that she is keeping from the public. In a normal circumstance, people can choose what to keep secret in their lives. However, when one is a prominent role model to others, they must be careful of what they do in their daily lives, as even the slightest move could invite political criticism.

Women are usually placed under heavy scrutiny, especially in the realm of political differences. The perception of a woman may be one’s own version of what kind of role model she may be, and not the identity the woman herself wants to have. In the case of Scarlett Johansson, her view of being a humanitarian did not coincide with her views of being a “Global Brand Ambassador” for the Soda Stream Company.

“She (Johansson) and Oxfam have a fundamental difference of opinion in regards to the boycott, divestment and sanctions movement. She is very proud of her accomplishments and fundraising efforts during her tenure with Oxfam” said a representative of Johansson in response to stepping down at Oxfam and stated by.

Surprisingly, some Palestinians who are working in the factories are thankful for the job. According to The Christian Science Monitor, Omar Jibarat of Azzariah, a Palestinian who works in Tel Aviv dreams of working in the factory. “I would love to work for Soda Stream. They’re quite privileged. People look up to them. It’s not the people who want to boycott, it’s the officials.”

A few Palestinians, including Omar, are actually backing Johansson’s new trajectory, hoping it will improve their own lives. However, the vast majority of Palestinians, and those who condemn illegal Israeli settlements, found her political stance to be disconcerting. She made a statement about the controversy.

“I never intended on being the face of any social or political movement, distinction, separation or stance as part of my affiliation with SodaStream, given the amount of noise surrounding that decision, I’d like to clear the air,” she told the Huffington Post.

Her error of judgment is quite a large problem. She must know that whatever she says or does has a very big influence on whoever can access her. In this day and age of technologic advances, accessing her goals and political ties is easier than ever. She needs to understand that even if she does not mean to become the face of a political controversy, she has without doubt become one of the most controversial actresses of recent history.

Past articles about the Boycott, Divestment and Sanction movement: