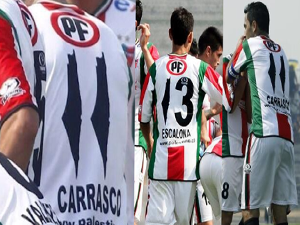 A Chilean team’s newest kits have put the squad under pressure following accusations that the shirts, which feature a map of historic Palestine, “foment terrorist intent”.
Yes, you read that correctly. A club football team is being accused of promoting violence and terrorism because of a map on the back of its jerseys.

Club Deportivo Palestino is one of Chile’s oldest club teams. Founded in 1920 by Palestinian immigrants, the club has had a steady presence in Chile’s top tier league. The team is based in Santiago, Chile’s capital, where it draws much of its support from the hundreds of thousands of Palestinian immigrants who fled to Chile to escape violence and colonialism as far back as the mid- to late-1800s and especially during the Nakba of the late 1940s. Today, Santiago is widely regarded as home to the largest Palestinian community in the West.

Proud of the team’s history, the team’s front office does what it can to preserve the vision and the culture of the organization’s founding members. The crest and the team’s strip boldly feature the colors of the Palestinian flag. The Bank of Palestine was at one point the team’s main shirt sponsor.

CD Palestino players, past and present, have embraced the very same vision and culture. Team captain Filipe Nuñez recently spent time visiting families and children in the Aida Refugee Camp in Bethlehem to strengthen ties between Chilean and Palestinian football fans. The team has been known to hold moments of silence and reflection during major Israeli military offensives in the occupied Gaza Strip. CD Palestino also regularly starts players of Palestinian descent.

More recently, the team swapped the number “1″ on its jerseys for silhouettes of the historic map of Palestine.

This move inspired the ire of local and international pro-Israel communities. Gerardo Gorodischer, president of Chile’s Jewish community, has demanded a formal apology from the club as well as a league-imposed ban on the shirts. To add more drama to the mix, the Simon Wiesenthal Center has urged the Chilean National Football Association to fine CD Palestino for inciting terrorism.

Herein lies the head-scratching confusion. How can a map of a single contiguous state inspire terrorism? Better yet, how can a map of a single continuous state inspire criticism from the very same individuals and organizations that justify (or at the very least, fail to condemn with anywhere near as much resolve): illegal settlement building, arbitrary home demolitions, repeated violations of international and human rights law, violent arrests of children, military assaults on civilian populations, construction of a barrier wall, ‘price tag’ settler violence, imprisonment without charge, land confiscation, separate roads for Jews and Palestinians, torture in prison cells, a strangling siege and inhumane blockade, and all-too-common intimidation tactics?

If these realities do not fulfill the criteria for fomenting violence, bloodshed, and terrorism, then I do not know what does. And clearly, neither does Gorodischer.

If there is any map people should complain about, it is the one that shows the West Bank and Gaza Strip steadily decreasing in size and contiguity over the past few decades despite international condemnation. Is that the map CD Palestino should feature on its kit? Will pro-Israel communities be proud of the international and humanitarian laws Israel skirts with impunity? Will this let allow them to champion Israel’s honorary title as the only country that gets to complain about other countries’ borders without settling its own?

Considering CD Palestino’s rich heritage, the very same heritage groups like the Simon Wiesenthal Center wish to erase, there is nothing surprising about the team’s new kits.

What is surprising, however, is the argument that politics and football do not mix — an assertion provided by Gorodischer — and that if and when they do, the responsible parties should be punished.

Let us look no further than Israel’s own Beitar Jerusalem, a team with fans that proudly stood behind a ‘Beitar is pure forever’ banner and booed Beitar player Zaur Sadayev, who also happens to be Muslim, the moment he scored his first goal for the team. Do not forget the boos and insults that rain on Sadayev and Muslim teammate Dzhabrail Kadiyev whenever the ball heads their way. (Check out ESPN’s documentary on the team.)

Let us also remember the hundreds of Beitar fans who, out of sheer loyalty to their team and to their state, mauled Palestinian workers at an Israeli mall and — get this — managed to get away with it because of a tired technicality that so many Palestinians are used to hearing: despite video footage, no formal complaint was filed by police.

What are we to make of Israel’s mission to disrupt Palestinian football operations once and for all? The spotlight quickly falls on Mahmoud Sarsak, a footballer for the Palestinian national team who was imprisoned in 2009 and detained and tortured for over three years without formal investigation or charge. The spotlight shifts to the Palestinian national team which, as a unit, has suffered greatly from arbitrary travel restrictions. During an Asian Cup qualifying match in 2006, Israel denied exit visas to all players based in the West Bank and Gaza Strip which effectively led to the Palestinian team’s elimination from the competition. During World Cup qualifying in 2007, a large part of the roster was not allowed to travel to Singapore, thereby forcing Palestine’s national team to forfeit the match. Similar situations have happened since then.

And we cannot ignore the fact that Gaza’s premier pitch, the Palestine Stadium, was bombed by Israel in 2006, then rebuilt only to be bombed again in 2009, and rebuilt for a second time, just to be leveled to the ground once more in 2012.

When football gives the people of Palestine joy, the Israeli government considers it a suitable target. Palestinians are not the ones responsible for politicizing a sport whose infrastructure is not allowed to serve an occupied people.

In the grand scheme of things, a black map of historic Palestine — the very same map that existed when CD Palestino was founded — on the back of two dozen jerseys is a reminder of the team’s history and, more than anything else, a declaration that football is greater than bitter divides.

Dave Zirin of The Nation sums it up sweetly. “[I]n this day and age when Israel, the Gaza Strip and the West Bank are divided by a crisscross of concrete barriers, barbed wire fences and armed check points, the vision of an undivided country provokes rage among those who have a vested interest in walls.”