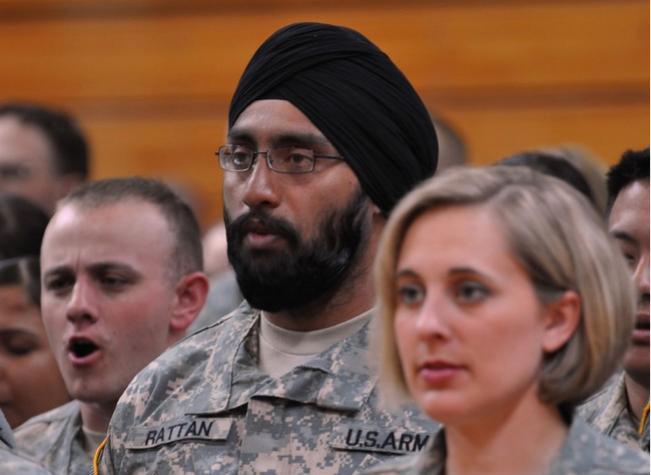 For many Americans, religion plays a big role in their daily lives. Imagine having to live in a society where no one respects or acknowledges your religion.

How would you feel if you were told that you couldn’t come to work unless you cut your beard? For most Muslim and Sikh men who serve in the United States military, this would be a major problem because cutting their beard interferes with their religious beliefs. These men were forced to pick between practicing their religion and serving their country. The first amendment of the constitution prohibits religious discrimination, yet thousands still continue to face these issues today.

We shouldn’t ignore the fact that we did however, make accomplishments over the past years on prohibiting discrimination against religion. A recent accomplishment we have made on this matter is by accepting beards, long hair, and turbans in the military. This has been a huge success because our troops are finally allowed to exercise their religion while serving in the military.

It all happened after a Sikh American raised his voice and demanded that he should be able to wear a turban or keep a beard while in uniform.Lieutenant Commander Nate Christensen, confirmed that the policy has been changed and now military men are being allowed to keep beards, long hair,turbans or any sort of clothing worn for religious purposes. There should be no problem as long as it does not interfere with good order and discipline within the military. NBC News also confirms that the military will make every effort to accommodate every individual’s religious beliefs such as allowing Orthodox Jewish service members to wear yarmulkes, and Muslim service members to keep beards while in uniform.

Those who are not in the military probably do not understand why this is a big matter because it affects them in no way. Imagine yourself being told at work that you can not practice your religion? It makes you feel like you’re being discriminated against and it puts you in a situation where you have to pick between your religion and work. We need to keep in mind that America is a diverse country. A lot of Sikhs, Muslims and other religious men were being held back from being able to join the military. This new policy which allows troops to seek waivers to wear religious clothing or engage in religious practices affects thousands of Americans.

However, this has not solved the entire situation. ABC news stresses that while the new policy has its positives on accommodating with religion, Sikh Americans and other Americans from various religions will still have to go not only through a lengthy and uncertain administrative process before being approved or denied, but also will need to seek a new waiver at every new assignment.

On the positive side, this has been a huge success because until now there had been no consistent policy across the military to allow accommodations for religion. If the workplace starts to accommodate religion then it not only shows respect to the employee but it eventually teaches employees that they too need to accept each other’s religions. It also allows them to learn more about other religions. That’s the first step we need to take in order to eliminate religious discrimination for good. If that Sikh man had never raised his voice then it’s hard to tell how many more years the military men would have to continue having to pick between work and religion. This gives us an important lesson to learn; if we need a change in our society, then we need to speak up and fight for it.