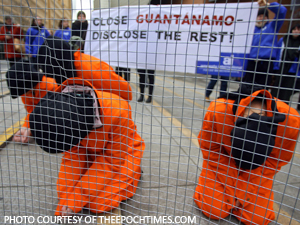 Facebook
Twitter
Pinterest
WhatsApp
Email
Print
February 2014 marks the anniversary of the massive campaign of hunger strikes by Guantanamo Bay Detention Center detainees. People in Chicago will be holding several events in solidarity.
The attempts by the U.S. administration to quash the hunger strikes — particularly through forced feeding — have been the subject of past comment by CAIR:
“We urge Pentagon officials to end the cruel practice of force-feeding prisoners because it violates medical ethics and the international legal prohibition of cruel, humiliating and degrading treatment of detainees. The practice is always wrong, and is particularly offensive during Ramadan, the month of fasting. Cruelty is cruelty, whether it is inflicted during daylight or after sunset.”

(See “CAIR Urges End to Force-Feeding of Gitmo Hunger Strikers During Ramadan,” July 1, 2013)An event combining video and discussion by experts on the issue of hunger strikes and forced feeding will take place Thursday, February 27, at 7:00 p.m. at Grace Place (637 South Dearborn).   In addition, vigils focusing on the hunger strikes and forced feeding will be held every Friday in Federal Plaza (Jackson and Dearborn) beginning at 4:30 p.m. (February 7, 14, 21, 28)These events have been organized by a diverse group of individuals and organizations who have worked steadily over the years to advocate for justice for detainees at Guantanamo, and to educate the public about the larger problem of islamophobia and stereotyping. (SeeChicago Coalition to Shut Down Guantanamo)   They are part of a series of events being carried out by groups nationwide,  and around the world. (On February 6, protesters in London will mark the 1-year anniversary of the Guantanamo hunger strike. )

As I have written in a recent blog post, more than anything else, the hunger strike is about the prisoner’s ability to decide for himself, and to resist for himself; to exercise power, to refuse to be an instrument of his own oppression and instead take his liberation into his own hands. (See HUNGER: When Detainees Turn the Tables On Their Tormentors).

This is a profoundly important philosophical and spiritual concept.  It is the responsibility of each of us to explore, think about, and discuss this important question about how state power collides with the exercise of conscience in the pursuit of justice.

Related post: January 11: A Day to Speak Up Against Islamophobia and Stereotyping