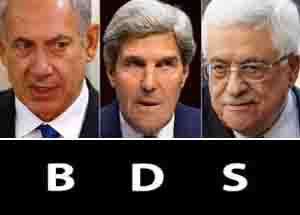 At the beginning of February, a remarkable exchange took place between U.S. Secretary of State John Kerry and Benjamin Netanyahu when Kerry warned that Israel could find itself increasingly targeted by a boycott if it fails to reach a peace deal with the Palestinians. It isn’t important that he didn’t quite say that and Israeli government officials predictably reacted with accusations of his statements being “hurtful,” “unfair” and “intolerable”. What is important is that for the first time in a U.S. brokered Middle East peace process stretching back to the U.S. Secretary of State Rogers Plan in 1970, the U.S. actually warned of a real and tangible threat to Israel’s position and the Israeli government acknowledged the threat.
Of course, Kerry did not really threaten Israel with a global boycott. What he did say when asked about the risks of the talks failing: “Today’s status quo absolutely, to a certainty, I promise you 100 percent, cannot be maintained. It’s not sustainable. It’s exclusionary.” He added, “You see for Israel, there’s an increasing delegitimization campaign that has been building up. People are very sensitive to it. There are talks of boycotts and other kinds of things.” Kerry was describing the growing threat of the global boycott divestment and sanctions (BDS) movement, while taking the Israeli position that BDS is a “delegitimization campaign”, i.e. a way of undermining the Israeli state and not a non-violent campaign to end the occupation and secure human rights for the Palestinians. The fact Kerry would even bring up the threat of “boycotts and other kinds of things” and the strong Israeli government reaction to his vague statement is enough to show how threatened the Israeli government feels by the growing BDS movement. “Benjamin Netanyahu…and some of his senior ministers…strongly criticized groups who are threatening a boycott of Israel over its policies toward the Palestinians. Their remarks were a sharp retort to Secretary of State John Kerry, who warned a day earlier that the risk of boycotts would intensify should the current Middle East peace effort fail.” Yuval Steinitz, Israel’s minister of strategic affairs, added, “Israel cannot be expected to negotiate with a gun to its head.” New York Times March 4, 2014.

In past U.S. attempts to engage the Israelis and Palestinians in negotiations, rarely has the U.S. spoke of “threats” to Israel not making progress in peace talks. Usually U.S. spokespeople said the building or expansion of settlements were “unhelpful” with no concrete pressure on Israel to halt that activity. Even the recent unusually strong Kerry statement “Let me emphasize that the position of the United States is that we consider now, and have always considered, the settlements to be illegitimate”, there was still no openly stated pressure for Israel to withdraw from existing settlements or stop expanding existing ones.

Another unique part of this exchange is that for the first time there is a powerful international player who can have a major impact on Israeli-Palestinian relations and is not even at the negotiating table, i.e. the BDS movement. The peace process has always suffered from not including all parties involved in the conflict, especially all Palestinian groups and the Diaspora. The current attempt at negotiations is one of the most limited in that it only includes the U.S., Israel, and the Palestinian Authority. Conflict resolution 101 tells you that successful negotiations of a long-standing conflict require involvement of all parties and a neutral mediator. One of the best examples of this was the negotiation of the Good Friday Agreement in Northern Ireland in the late 90’s when all parties were invited with few pre-conditions even if one side had designated them as “terrorists”. The U.S. Government played a neutral role and was not supplying military aid to one side in the negotiations. The many attempts to negotiate an Israeli-Palestinian agreement, including the Oslo Accords, never included these two critical elements of success. Ironically, now there is a global movement seeking justice in Palestine initiated by the Palestinians that is out of the control of any government involved, i.e. U.S., Israel, and even the Palestinian Authority. The global BDS movement is progressing rapidly regardless of any activity in the peace talks or even who is taking part.

Since July of 2013, Kerry has been working on a “framework for negotiation” with Israel and the Palestinian Authority that only tries to establish a basic set of concepts acceptable to both parties to begin actual negotiations. If this sounds like trying to agree on the shape of the negotiating table you would be wrong. The “framework” reportedly includes the recognition of Israel as a Jewish state, inclusion of all the main settlements within Israel, potentially maintaining an Israeli security presence in the Jordan Valley, no clear resolution of the status of Jerusalem, and no right of return for Palestinian refugees. A copy of this proposed “framework” will likely be presented to Netanyahu when he visits Washington early next month to meet President Obama and address the annual conference of AIPAC. The reaction of the Palestinian Authority to the rumored elements of the “framework” has not been positive. “When you talk about a Jewish state, you are talking about the end of the end of any solution for Palestinian refugees – do you think any Palestinian can accept this,” Nabil Shaath, a senior Palestinian official and former foreign minister, told journalists in a recent briefing in Ramallah. “It’s impossible for the Palestinians to sign such an agreement with Israel.”

With the self-imposed deadline of April for making progress in the talks, the chances of any real agreement are slim. At the same time, the chance of the global BDS movement growing and continuing to put major pressure on Israel to end the occupation is very high.

The boycott of Israeli settlement products received worldwide publicity, especially in the U.S., over the Scarlett Johansson being named a “global brand ambassador” for SodaStream whose primary factory is in an illegal Israeli settlement in the West Bank. The boycott of settlement products is having a significant economic impact. “The campaign is starting to bite. Last year, Jordan Valley farmers lost an estimated $29 million, or 14 percent of revenue, because they were forced to find alternative markets for their exports, such as Russia, where prices are 20 to 60 percent lower. Pepper exports to Western Europe have stopped completely, and grape exports are likely to be phased out this year because of consumer pressure, says David Elhayani, mayor of the Jordan Valley Regional Council and a farmer himself. Israeli leaders have for years scoffed at the notion that fewer dates or peppers in European shopping carts could put a dent in the Israeli economy. But in the past six months, a flurry of European banks, pension funds, engineering firms, and lawmakers have driven home their displeasure with Israeli settlements, and Israeli leaders are taking the threat more seriously.”

Another major fear of the Israeli government is the boycott of settlement products spreading to products and businesses within Israel itself. That has already started happening. The BDS movement is beginning to make it harder for businesses to justify doing business within Israel. “Since the campaign against G4S was launched in 2012 by Addameer and other prisoner organizations, G4S [international security services and facilities management company] has lost contracts with universities, banks, charities and public bodies around the world…Research center Who Profits recently revealed that the contract G4S holds with the Israel Prison Service is due to expire in 2015. So G4S now has a clear choice to make in the coming months: either it can choose not to renew its contract with the Israel Prison Service as a first step towards ending its complicity with Israeli apartheid, or it can remain an active participant in torture and detention without trial and continue to lose out on lucrative contracts as a result.”

Businesses are starting to avoid bidding on projects. “The deterioration of Israel’s international standing has been evident this week as at least two leading international companies bidding to build private seaports here dropped out of the government’s tender due to concerns over the political repercussions.” These cases indicate pressure coming from the EU, but there are also increasing signs of BDS activity in the U.S. from the SodaStream campaign to the American Studies Association adopting a resolution of support for the Academic Boycott of Israel.

The initial widespread pessimism from Israelis and Palestinians expressed in polls about the peace process achieving results (“Only 10 percent of Israelis and 27 percent of Palestinians believe that negotiations will be renewed and violence end.”) has had no reason to improve with the ongoing “framework for negotiations” discussions. Now the process has become almost irrelevant to the real forces that are pressuring the Israeli government to end the occupation and provide equal rights to Palestinians. The economic pressure of the BDS movement is having the biggest effect and not the efforts of the U.S. to restart peace talks. There is little reason to think the current effort by Kerry will succeed. The global BDS movement is only accelerating as the reaction to it by the Israeli government becomes more extreme with attacks on the movement of anti-semitism and “delegitimizing” Israel. As the April deadline comes and goes, this is likely to be the last concerted attempt by the U.S. to broker an Israeli-Palestinian peace process.

NBC Chicago Made a Mistake by Connecting Hate Crime to Sunday