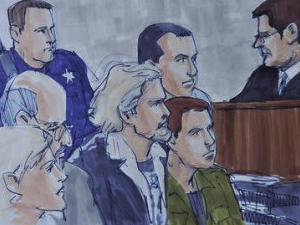 There is an alarming phenomenon going around the nation.  In large landmark cities in the United States sensational storytelling remains prominent in mass media. Life has become a narrative for the citizens of the U.S.A, where “news” stories are carefully told with an introduction, following the plot to a climax and then to a resolution to calm the viewers, as a sort of television show as opposed to actual newsworthy content. This is the case in the major-headlined NATO 3 case in Chicago, where the case was poorly backed and the only pretense of the case was another opportunity to denounce terrorism instead of realizing the actual content of the allegations.

Three members of the Occupy Wall street activist group were accused of sending “terrorism-related” threats to the NATO Summit and on top of that, trying to terrorize the city of Chicago with gas attacks and flamethrowers. In the trial against these three men, no evidence was concrete except the videos showing their arrests. The only evidence that can plead against their case are the two undercover police officers who were working with the so-called NATO 3 and claimed the men were making “at-home” Molotov cocktails and gas-soaked pieces of fabric to harm individuals. These pieces of evidence were eye-witness accounts of what transpired prior to the threat, but psychologist have explained the inaccuracies of eyewitness accounts in major trials.

According to SimplyPsychology.org, eyewitness testimony can be affected due to the testifier’s mood, reconstructive memory and focus on only a certain aspect of the trial, which ultimately leads to erroneous decisions on behalf of the court. In this specific trial, the “threats” that were believed to have been manifested from the three activists were probably nothing more than a psychological limitation in which the truth of the situation was being stretched due to the sensationalism of the news coverage from the media.

In recent news, the NATO 3 were not convicted of the terrorism of which they were accused, but were charged on counts of arson and mob action. This verdict sparked an outcry all around the nation, and especially on national news media.

Notably, an antagonist in the case, Cook County Attorney Anita Alvarez, showed support for labeling the three suspects as “terrorists”. She believed that these men were masterminds and had sinister intentions. However, she was later accused for “pursuing terrorism charges” when the comments and allegations were deemed inappropriate for the circumstance.

“If he builds a Molotov cocktail, you’d better assume he’ll throw it. If he talks about firebombing a bank or a skyscraper — if he says, “Ready to see a police officer on fire?” — you don’t stop to wonder if it’s the beer talking, or the testosterone. You take it dead seriously. Police and prosecutors did just that.” quoted from an opinion article on the Chicago Tribune titled “Belong in Prison: Terrorists or not, the NATO 3 belong in prison” that was written as a response to the unsatisfactory result of the case.

Frighteningly, the case’s verdict angered others, and not because the case at its start was poorly supported. An article on Huffington Post explained this entrapment technique perfected, somewhat by federal law, no matter who was on trial.

“Just as with the NATO 3, infiltrators  will often purchase materials for the crime and become instrumental to the “plan” in other ways. Whether it’s Muslims, Arab Americans, or political activists like the NATO 3 being targeted by undercover police, FBI agents, or paid informants — the tell-tale signs of infiltration and entrapment are usually the same.”

The author of this article believes that the NATO 3 terrorism scare was nothing more than a tactic to create fear and anger among hose who are led to believe all terrorism is black and white. However, that is not the case. Terrorist accounts can become nothing more than elaborate plot drivers for the fabricated outlet of “news”, and they are just feeding of the insane need for constant bombardment of terrorism threats to feed the fixation the nation has on terrorism. The media will even go so far as to almost “fabricate” a story out of a few lazy stoners who felt the need to make some noise in the media.

A reply from the government, and even the world, to the NATO 3’s stupid, non-terrorist behavior: “This is America, and that is terror”. Welcome to America, where everyone is potentially practicing terrorism.