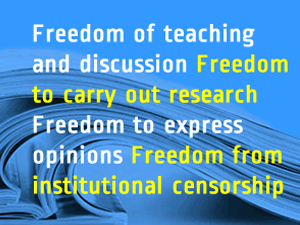 In December 2013, the American Studies Association (ASA) , the largest association of academics devoted to the interdisciplinary study of American culture and history, passed a resolution to endorse the call of Palestinian civil society for a boycott of Israeli academic institutions.

To quote from the resolution – “Whereas the American Studies Association is committed to the pursuit of social justice, to the struggle against all forms of racism, including antisemitism, discrimination, and xenophobia, and to solidarity with aggrieved peoples in the United States and in the world…It is resolved that the American Studies Association (ASA) endorses and will honor the call of Palestinian civil society for a boycott of Israeli academic institutions. It is also resolved that the ASA supports the protected rights of students and scholars everywhere to engage in research and public speaking about Israel-Palestine and in support of the boycott, divestment, and sanctions (BDS) movement.” In this resolution, the ASA is supporting the 2004 call from the Palestinian Campaign for the Academic and Cultural Boycott of Israel endorsed by the great majority of Palestinian civil society organizations. This action taken by the ASA has led to an avalanche of bills at the national and state level that threaten public universities with the loss of funds when their faculty support boycott activity of any kind. The response of faculty, students, and civil rights organizations like CAIR to this threat to academic freedom has been equally strong. In the tradition of The Free Speech Movement at UC-Berkeley from 1964-1965, faculty and students are uniting to protest laws and regulations restricting political activities and free speech.

There have been other academic organizations including the Native American and Indigenous Studies Association (NAISA) and the Association for Asian American Studies who have also endorsed the call. A letter signed by over 150 academics and scholars states “it is important to recognize that boycotts are internationally affirmed and constitutionally protected forms of political expression. As non-violent instruments to effect political change, boycotts cannot be outlawed without trampling on a constitutionally protected right to political speech. Those who support boycotts ought not to become subject to retaliation, surveillance, or censorship when they choose to express their political viewpoint, no matter how offensive that may be to those who disagree.”

The legislative opposition to the ASA or any academic organization or institution that supports an academic boycott has also been significant.

On the Federal level, Representative Peter Roskam (R-IL) and Dan Lipinski (D-IL) have introduced H.R.4009 , the Protect Academic Freedom Act, that would deny federal funding to academic institutions “participating in” the academic boycott of Israel. The bill would ban funding for institutions in which any organizations receiving university funding adopt resolutions or issues statements in support of the academic boycott.

Civil and legal rights organizations The Center for Constitutional Rights (CCR), National Lawyers Guild (NLG) and Council on American-Islamic Relations-USA (CAIR-USA) issued a statement opposing the bill. In a letter to members of the House of Representatives Education and the Workforce Committee, the CCR, NLG and CAIR-USA urges “lawmakers to recognize that denying federal aid based on such protected speech violates the First Amendment and threatens academic freedom. It stresses that boycotts to bring about political, social and economic change are protected speech under the First Amendment, and warns that legislation to deny public funding in response to the assertion of unpopular views would likely face Constitutional challenges.” CAIR Government Affairs Manager Robert McCaw added “It is clearly unconstitutional for members of Congress to attempt to legislate against political viewpoints with which they disagree. The same peaceful method of political activism has been used to challenge injustice in America and worldwide, including against one of the greatest forms of injustice in our time — Apartheid.”

On the state level, there have been anti-boycott bills introduced in New York, Maryland, and Illinois. In New York, the original bill was withdrawn and revised after opposition from multiple groups concerned about its unconstitutional attack on academic freedom and free speech. Although the bill in the U.S. Congress specifically targets boycott activities against the state of Israel, the state level bills do not. In New York for example, the revised bill that has already passed the state senate states “This bill would prohibit any college from using state aid to fund an academic entity, to provide funds for membership in an academic entity, or fund travel or lodging for any employee to attend any meeting of such academic entity if that academic entity has undertaken an official action boycotting certain countries or their higher education institutions.”

In Maryland, a similar bill would reduce funding to public universities as a penalty for reimbursing faculty’s participation in professional organizations that support boycott activities against any country that has “ratified a declaration of cooperation with the state or the country’s institutions of higher education.” No votes on the legislation have taken place but a hearing on the bill is planned during a meeting of the Education, Health & Environmental Affairs Committee. A recent Washington Post editorial came out against the bill saying that “legislation being advanced by state lawmakers to bar participation in the boycott goes too far and constitutes its own insidious assault on academic freedom.” The Baltimore Sun editorial echoes the same opposition. “Such a law would have a chilling effect on speech and would be inimical to the mission of institutions of higher education. We urge lawmakers to reject this ill-considered attempt to curtail academic freedom and the unfettered exchange of ideas.”

Finally, in our own state of Illinois, State Senator Ira Silverstein has introduced a bill – Senate Bill 3017– that would prohibit public universities and colleges from using any state funds on groups that have made statements in support of, or that participate in “boycotting a country which is a member of the Organization for Economic Cooperation and Development (OECD) or higher education institutions in that country”. Universities that do so would lose all of their state funding for that year. For instance, state aid could not be used for travel, lodging or membership dues for a faculty member attending the conference of an academic association that made a statement in support of a boycott. Given that the country is not specified, if this bill had been passed during the anti-apartheid campaign against South Africa, academic institutions would have lost funding for supporting any form of boycott against the apartheid South African government.

IL State Senator Silverstein first introduced the Amended SB 3017 on February 25. The bill’s original text, a placeholder for the amendment with the anti-boycott language, was assigned to the Higher Education Committee and was posted for a hearing on March 4th. Even though the Amendment to the bill was not even posted, the Illinois Coalition to Protect Academic Freedom and Free Speech (members listed below) quickly gathered opposition to the Amendment in case it was posted at the last minute. A number of organizations, academics, and community members voiced concern to senators through call-ins, letters and petitions stating that the proposed legislation was unconstitutional, and an impermissible attempt to dictate to Illinois universities what faculty speech activities are acceptable forms of expression and association. As a result of this rapid mobilization, the Senators on the Higher Education Committee were flooded with calls opposing the bill with many callers told that they weren’t hearing from anyone who was actually for the bill. It is likely that the Higher Education Committee will take up the bill after the state-wide election on Tuesday March 18.  The Illinois Coalition to Protect Academic Freedom and Free Speech is continuing to gather signatures from Illinois faculty and from the general public on petitions, while further actions are planned if this issue should again be raised in the Illinois Senate. For more detail, see the CAIR-Chicago Action Alert on the Illinois Anti-Boycott Bill.

After a vigorous call-in campaign organized by the Coalition on March 4th, the Illinois Higher Education Committee postponed action on the anti-boycott bill.  Last Friday, the bill was reassigned to the Judiciary Committee and the bill may be up for discussion as early as Wednesday, March 19 at 3 p.m. For more information, see the updated CAIR-Chicago Action Alert on the Illinois Anti-Boycott Bill.

Illinois State Senator Ira Silverstein’s unconstitutional State Senate Bill 3017 to punish universities and academics that participate in professional associations that adopt resolutions boycotting Israel or Israeli higher education was not called for debate or a vote during the Judiciary Committee hearing on Wed., March 19th due to the hundreds of phone calls, email messages, petitions, and direct discussions with members of the State Legislature all opposing the bill. It now appears, although there is no certainty on this, that the bill will not be moved forward during this legislative session. If the March 28th deadline for moving a bill is not met, it means this unconstitutional assault on academic freedom and free speech will have effectively been defeated.

But now there is a resolution –  SJR59  – that charges those who support the academic boycott of Israel with anti-Semitism, and encourages universities to condemn ALL academic boycotts. The Resolution will be heard in the Judiciary Committee today, Tuesday, at 3:00PM. For more information, see the CAIR-Chicago Action Alert on the Illinois Anti-Boycott Resolution.

The resolution sponsor, Senator Ira Silverstein, delayed introduction of the resolution in the Judiciary Committee to April 1 at 4:00PM. A possible reason was to generate support as now for the first time there have been witness slips supporting the resolution submitted. The Coalition mobilized opposition once again  by encouraging people to submit witness slips in opposition and to call State Senators on the Judiciary Committee. The ACLU of Illinois also released a statement opposing the resolution. For more information, see the latest CAIR-Chicago Action Alert on this Anti-Boycott Resolution.

Yesterday afternoon, the Senate Judiciary Committee of the Illinois Senate rejected Senate Joint Resolution (SJR) 59, proposed by Senator Ira Silverstein (D-Chicago), that urged Illinois university and college presidents to condemn academic boycotts as a form of protest. The vote was 3 for the resolution, 2 against, and 5 “present.” This means the resolution will not move forward to the Illinois State Senate.  The resolution was a direct response to boycotts against Israeli academic institutions, called for by Palestinian civil society in response to human rights abuses against Palestinians, and recently endorsed by the American Studies Association (ASA) and other organizations. See the Press release from the Coalition for more information.