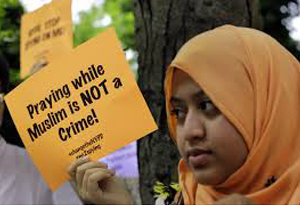 On February 20th, a New Jersey federal judge dismissed a lawsuit brought by the Center for Constitutional Rights and the Muslim Advocates on behalf of Muslim Americans secretly spied on in mosques, businesses, and student associations by the New York Police Department (NYPD). These organizations were labeled as “Locations of Concern” implying they demonstrated “a significant pattern of illegal Activity” even though the NYPD reports contained no evidence of any illegal activity. The Muslim Americans charged that the city had violated their First and Fourteenth Amendment rights by targeting them solely on the basis of their religion. U.S. District Judge William Martini determined the spying constitutionally allowable since the NYPD needed “to locate budding terrorist conspiracies.” The decision had two outrageous assertions. First, the Muslim Americans were not targeted because of their religion, but because they were viewed, with no evidence, as potential terrorists. Secondly, if there was any “injury” to the Muslims in this suit, it was the result of the Associated Press (AP) breaking the story and not from the spying itself.

The NYPD started this secret program early in 2002 and it remained secret until the AP exposed the program in 2011 by obtaining confidential NYPD documentation describing details of videotaping worshipers, collecting license plate numbers, and monitoring sermons, conversations, and meetings – all without evidence of any criminal activity. One of the important facts ignored in this case was that this suit was brought on behalf of the Muslim community in Newark against New York City. That the NYPD was allowed to do surveillance on Muslim communities not only in a different city, but also in a completely different state went without comment by Judge Martini. The case provides a glimpse not only into the type of activities security agencies are allowed to do, but also the jurisdiction lines they can cross in the name of anti-terrorism.

In his short ten page ruling, Judge Martini believed the NYPD was convincing in its assertion that surveillance was part of an anti-terrorism program, not an anti-Muslim one. Even though the only targets of the spying program were Muslims, Judge Martini states ” the Plaintiffs in this case have not alleged facts from which it can be plausibly inferred that they were targeted solely because of their religion.” He goes onto to speculate “The more likely explanation for the surveillance was a desire to locate budding terrorist conspiracies. The most obvious reason for so concluding is that surveillance of the Muslim community began just after the attacks of September 11, 2001.” Using the judge’s logic, since the spying on Muslims started after the attacks of September 11, then it is obvious that the spying on mosques and Muslim student associations was to stop possible terrorist attacks. In other words, if you are looking for potential terrorists, the first place you should look is in the Muslim community.

The Center for Constitutional Rights Legal Director Baher AzmyIn commented “in addition to willfully ignoring the harm that our innocent clients suffered from the NYPD’s illegal spying program, by upholding the NYPD’s blunderbuss Muslim surveillance practices, the court’s decision gives legal sanction to the targeted discrimination of Muslims anywhere and everywhere in this country, without limitation, for no other reason than their religion.” Just last month was the annual Chicago Day of Remembrance for Japanese Americans interned during World War II. Azmly draws the connection between this decision and the type of decisions that lead to morally repugnant programs like internment.  “The ruling is a modern day version of the discredited Korematsu decision allowing the wholesale internment of Japanese Americans based solely on their ancestry. It is a troubling and dangerous decision.”

The plaintiffs in the case were a wide range of Muslim Americans.  There was a US soldier and a student in international social work worried about being labeled in future background and security checks for jobs; a teacher in two Muslim girls schools concerned about future employers knowing she worked in a monitored school; and owners of a body shop and a meat company who lost customers afraid of patronizing their business; the Council of Imams in NJ and the Muslim Students Association of the US and Canada described a loss of attendance and “altering religious services and events to avoid being perceived as controversial”.  Four of the individuals involved complained of having to avoid “discussing religious and political topics, praying in public, or attending mosque service in order to avoid law enforcement”.

After this detail of the impact of secret spying on their present and future lives, the court document states those in the suit accused the surveillance program of causing “diminished religious expression, employment prospects, property values, and revenue following the Associated Press’s publication of its story about the Program.” The judge narrowly focused on that last statement. While apparently acknowledging the “injuries” the collective group of Muslim Americans endured, Judge Martini blamed the Associated Press for causing those injuries by exposing a secret program that was targeting Muslims because of their religion. “None of the Plaintiffs’ injuries arose until after the Associated Press released unredacted, confidential NYPD documents and articles expressing its own interpretation of those documents. Nowhere in the Complaint do Plaintiffs allege that they suffered harm prior to the unauthorized release of the documents by the Associated Press. This confirms that Plaintiffs’ alleged injuries flow from the Associated Press’s unauthorized disclosure of the documents. The harms are not “fairly traceable” to any act of surveillance.” This is like saying that the unconstitutional and unrestricted spying the NSA was doing on all American citizens and foreign leaders is the fault of the Guardian and the NY Times because they exposed it.

The AP actually won a Pulitzer-Prize for its stories describing the surveillance of at least 20 mosques, 14 restaurants, 11 retail stores, two grade schools, and two Muslim student associations just in New Jersey. To the casual observer, it would appear that any secret spying on innocent citizens based solely on their religion would be a violation of the Constitution. In New Jersey, Attorney General Jeffrey Chiesa concluded after a three month fact-finding review that the NYPD broke no state laws when it did surveillance in New Jersey, while New York’s attorney general declined to investigate.

“While this surveillance program may have had adverse effects upon the Muslim community after the Associated Press published its articles, the motive for the program was not solely to discriminate against Muslims, but rather to find Muslim terrorists hiding among ordinary, law-abiding Muslims,” Judge Martini concluded. The program was designed to profile Muslims solely based on their religion and not on any evidence of suspicious or criminal behavior with the justification that there was a possibility one of those hundreds of Muslims might be a potential terrorist. The number of potential Muslim American terrorists identified during this multi-year program? Zero.

Hopefully, this questionable ruling that exonerated wholesale spying on New Jersey’s Muslim community will not stand. “The fight is not over by any means. The surveillance program violates the Constitution, and we are confident that this decision will not hold up to review upon appeal,” said Glenn Katon, legal director of the Muslim Advocates.