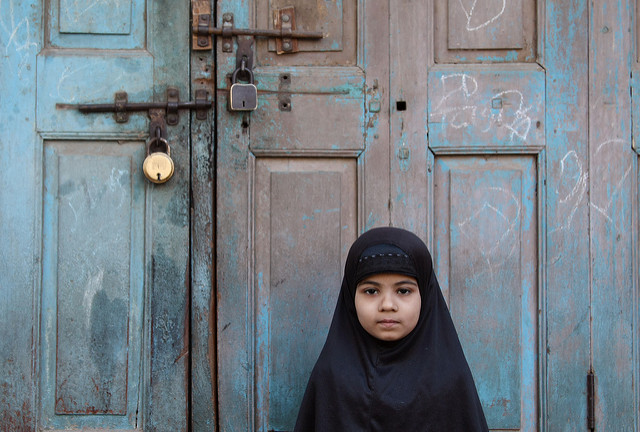 Alice in Arabia is the aspiring TV-drama written by ex-U.S. soldier Brooke Eikmeier. The plot follows an American teenage girl as she is abducted by her Saudi-Arabian grandfather and taken to Saudi Arabia, where she is imprisoned within his home. Wait, I thought Alice was in Wonderland…

The name sparks a stark resemblance to Disney’s famous 1951 production, Alice in Wonderland, that threw a white girl into a world of drugs, chaos and mayhem, all the while threatening to corrupt her whiteness. Let’s not ignore the parallel being drawn between the LSD-laden Wonderland and the Arab world.

When the news was released about the drama-pilot soon to air on ABC Family, people were baffled, and rightfully so. Many, actually, thought it was a joke.

Sadly, this is not some harmless prank. Here is a snippet of the controversial synopsis that sparked the discussion, as stated by Tom Ascheim, President of ABC Family:

Surviving life behind the veil? Statements like that reflect on a number of issues. Here are two:

First and foremost, “the veil” is not a set of prison bars. Wearing hijab is not a life behind bars and often times serves as a source of liberation from the media’s sexualization of women.

Second, Muslim women do not need, nor want more depictions of themselves as oppressed or in need of saving. If writers such as Eikmeier talked to actual Muslim women about the issue, she would be able to feel the overwhelming exhaustion that is a result of no one listening. By portraying the hijab in a negative light, the show would not work as a vehicle of liberation for Saudi women. It wouldn’t liberate anyone, for that matter. It would further fuel the presumption that Muslim women are weak, subservient, and not nearly as “independent” and witty as American girls.

Moreover, the Alice in Arabia plot line reeks of white supremacy and plays along the same “White Savior, Oppressed Muslimah, Barbaric Brown Civilization” narrative that is all too common in this country. And what makes it a credible depiction?–A white woman who served overseas assisting NSA missions in the Middle East.

#AliceInArabia writes her own book: “On Being Kidnapped & Abused by Racist, Orientalist TV Writers for the Sake of Their Agenda.”#AliceInArabia http://t.co/8gBK6MMYL7

The show rides on the back of the notion that everything Arab–its land, people, religion, and culture–is backwards and uncivilized, and all of it needs saving. By whom? A white savior, because white is always shown to be immaculate and restorative.

Alice in Arabia is not doing the Arab/Muslim community any favors. What it does do is perpetuate stereotypes against Arab men, Arab culture, and Muslim women. If this show was truly geared towards pro-Muslim depictions, then why is she being kidnapped by her Saudi relatives and why is her oppressor none other than The Tyrannical Hijab? The entire premise of the show is geared to push America’s deep-rooted prejudice towards Arabs and Muslims deeper into the ground. Arab and Muslim figures on TV controlled by white puppeteers do not give voice to anyone. Spongebob gave more voice and agency to sponges than American media has given Muslims.

We already got a taste of Ayrabs kidnapping poor white girls in Taken with Liam Neeson. Do we really need a show about it? #AliceInArabia”#AliceInArabia http://t.co/8gBK6MMYL7

However, it’s necessary to help others understand where the problem truly lies and what can be done to encourage change and come to a solution, however vague or rough (that’s why constructive discussions needs to happen). Here are some tips on how to foster genuine depictions of Arabs and Muslims in the public sphere:

1. Let Muslim women and men speak for themselves.
2. Hire brown men for roles that don’t call for self-combustion, thievery, or being a pimp.
3. Do not try to save me.
4. Do not try to save everything that isn’t white, like me.
5. Stop constructing Muslim/Arab narratives through white lenses.
6. Make room and open the floor for real, authentic conversations.

It actually looks like common sense, but common sense isn’t as common as we’d like it to be. Let’s hope change comes in the form of authentic Muslim figures and not another magic carpet.

Lastly, as you can see below, Eikemier did give her two cents on all the feedback she was receiving. The tweet beneath is an abridged version.

The Twitter discussion included all of these ideas and more. Check it out and add your voice to the conversation, and make sure to comment down below to let us know what you think.

(ANAHEIM, CA, 3/19/14) – The Greater Los Angeles-Area office of the Council on American-Islamic Relations (CAIR-LA) said today that it has asked ABC Family Channel to meet with Muslim and Arab-American community leaders to discuss concerns about potential stereotyping in the pilot for a new series called “Alice in Arabia.”
Press Release:
http://us4.campaign-archive2.com/?u=ff2677122d1f429e0db1748a2&id=07e5e69a78