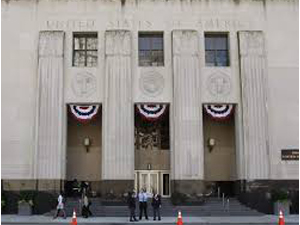 Mohammad Hassan Hamdan, a  22-year-old from Dearborn Heights, Michigan was arrested on Sunday, March 16 at Detroit Metro Airport by the FBI who said he allegedly told an undercover informant that he planned to fly to Lebanon to join the militant group Hezbollah to fight in Syrian.  Hezbollah, classified as a terrorist organization by the U.S. government, currently supports Syrian President Bashar Assad’s forces against anti-government forces. In the complaint the Special Agent of the FBI, part of the Detroit Joint Terrorism Task Force (JTTF), states that  the FBI learned of his plan to travel to Syria with the help of a confidential informant who told the FBI about Hamdan’s plan.

Hamdan appeared before U.S. Magistrate R. Steven Whalen at the U.S. District Court in Detroit on Monday, March 17, where he was ordered to be temporarily detained until a court hearing on March 24. He is being charged with “attempting to provide material support (money, goods, or services) to a foreign terrorist organization”, a charge that can result in up to 15 years in prison and a $250,000 fine. In the joint FBI and U.S. Attorney’s office press release, after listing the very serious charges and penalties, it attempts to downplay the case saying the “criminal complaint contains merely accusations, and the defendant is presumed innocent unless and until proven guilty”.

Hamdan was born in Lebanon and came to the U.S. in 2007 as a teenager and became a legal resident. In November 2013, he filled out an application to become a U.S. citizen. In the complaint, “SOURCE 1”, an unnamed FBI informant, indicated hearing on September 12, 2013 that Hamdan had plans to travel to Syria by Christmas 2013 in order to fight alongside Hezbollah. Hamdan also revealed that he could not leave because his Lebanese passport was being held by his sister, who was aware of his intentions and was trying to prevent him from going.  Hamdan’s family disputes this charge and all others  in the complaint saying that his sister and family had no knowledge at all about his alleged intentions. His family said that Hamdan had recently suspected that he had been communicating with an informant, and it is possible that he could have intentionally made comments about joining Hezbollah just to get a reaction. Talking to WWJ Newsradio 950′s Jon Hewett  outside the courthouse on Monday, Hamdan’s aunt, Rehab Beydoun, said she believes her nephew was set up by a local man who tipped federal investigators.

“He was telling us, this guy is up to something, he keeps calling me, asking me questions. Why would he do that? So, he wanted to play a game with him to see where he’s going, and he got in trouble,” she said.

In an interview with the Arab-American News on 3/21/14 , Hamdan’s mother, Monira Beydoun, expressed that her son is innocent and has never had any intentions of joining Hezbollah. According to Beydoun, her son isn’t physically capable of joining the militant group because he suffers from a dysfunctional lung and she has medical records to prove it. Because of his medical condition, Hamdan has been mostly unemployed and would spend his days at home and his nights sleeping with a medical ventilator. Beydoun adds that the family knows who the FBI informant is and that her son purposely made statements to him about joining Hezbollah. Beydoun says that the informant is friends with her son’s ex-girlfriend. Hamdan wanted to appear suicidal in front of the informant so he could relay the message to his ex-girlfriend, in an attempt to perhaps win her back or have her feel sorry for him.

Since his arrest, Defense Attorney Art Weiss has said that Hamdan is “adamant that he didn’t do anything wrong.” Hamdan has since told the FBI that he had planned to temporarily visit Lebanon in order to get dental work done.

Hamdan’s  family and friends packed the courtroom for his hearing on both Monday, March 24 and Tuesday, March 25. The Arab American News reported on March 28th  that while the FBI agent was reading transcripts during testimony, the defense questioned the reliability of the undercover informant who filed the complaint against Hamdan.

The FBI revealed that the informant had previously received payments and was hired because he wanted to amend for some difficulties with the U.S. government. According to the FBI testimony, the informant is receiving an immigration benefit for his services. No other details were revealed about the undercover informant in court other than the fact that he is significantly older than Hamdan and is a restaurant owner in Dearborn. Hamdan’s Defense Attorney Weiss  argued that the informant was persistent in trying to set up Hamdan to express his support and involvement with Hezbollah, even when Hamdan would try to stray away from the topic during their recorded conversations. With these challenges to the testimony of the FBI, Executive Magistrate Judge R. Steven Wahlen told the courtroom that he will need additional time to review evidence that was presented to him over the two-day hearing and decide whether sufficient evidence exists in order to move forward with the case.

With the history of the FBI and police operations like the NYPD surveillance of the Muslim community, placing informants in Arab-American and Muslim communities, the community in Dearborn has reason to be skeptical when members of their community have serious charges leveled against them based on statements of FBI informants.