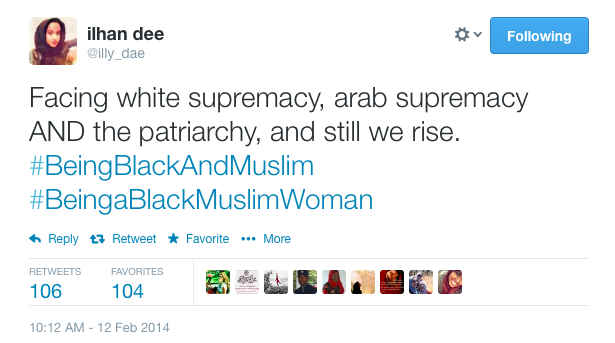 For Black History Month, the Muslim Anti-Racism Collaborative @MuslimARC launched the hashtag, #BeingBlackAndMuslim to encourage Twitter users to shed light on the difficulties they encounter, as well as the beauty of being black and Muslim.

The project quickly gained widespread attention; more than 7000 tweets were registered under the hashtag. Users reported instances where they were met with aggression from other Muslims, as well as stereotyping from non-Muslims.

Understanding all the racist comments directed your way at the mosque when you were a kid bc you speak Arabic at home #BeingBlackAndMuslim
— Hind Makki (@HindMakki) February 12, 2014

The issues were not isolated to race and religion, however. One of the most prominent issues stemmed from a need for women’s voices to be heard as well.

The most marginalized person in the American Muslim community is the Black female Muslim. #BeingBlackAndMuslim
— Dawud Walid (@DawudWalid) February 12, 2014

Some shared stories of support, others of frustration, but the overwhelming result was a need to speak out and for recognition and awareness.

The group’s mission statement reflects their commitment to end racism among Muslims: “Together, we are working to build and collect the tools needed to creatively address and effectively challenge anti-blackness and racism in Muslim communities.” The Muslim ARC is made up of a diverse people from every ethnic and religious background, including parents, teachers, imams, lawyers, students, artists, and activists.

Steve Huntley fumbles and loses with the issues