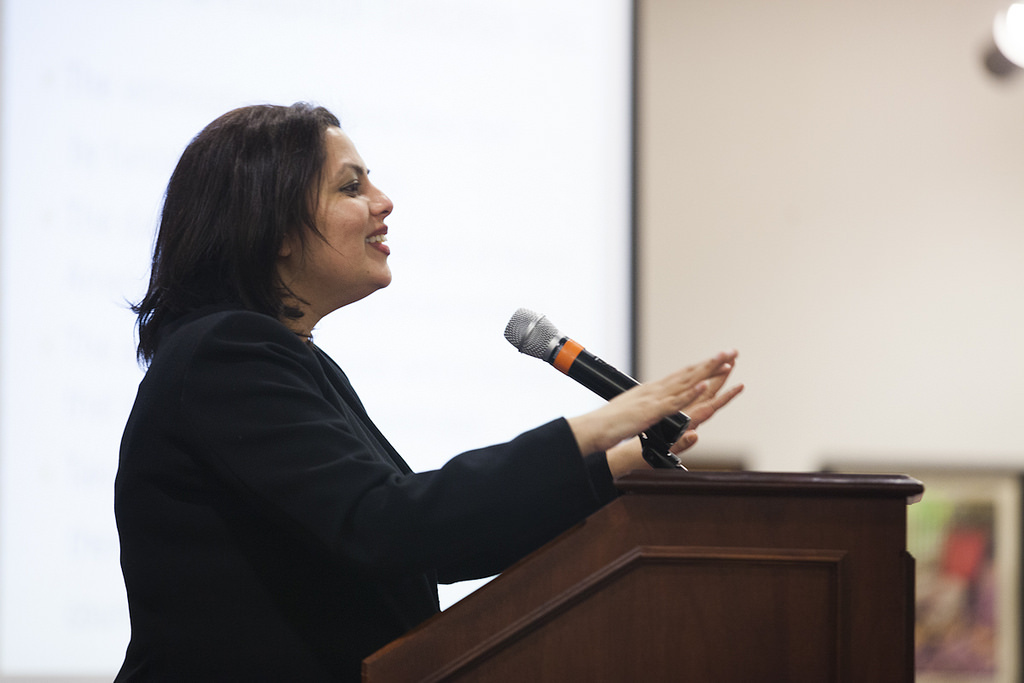 Zareena Grewal, a historical anthropologist who teaches American Studies and Religious Studies at Yale University, gave the al-Ghazali Intercultural Lecture at Elmhurst College on the topic of “American Muslims and the Reform of Islam”. The focus of her research is on race, gender, religion, nationalism and transnationalism across a wide spectrum of American Muslim communities. Her speech was based on ten years of research for her book, “Islam is a Foreign Country” that explores “how the question of who defines Islam today is intertwined with American Muslim’s identity as a national religious minority and as part of the umma, a global majority.”

Her book also focuses on the “deeply religious, but politically disaffected American Muslim youth” who are so often targeted by the media as “homegrown terrorists” and who fit “what has become the de facto profile of ‘radicalized’ Muslim youth,” She contends her research shows that American Muslims are genuinely conflicted between their obligations to a U.S. where they are not always considered fully “American” and to the umma, the transnational community of believers in Islam. In the meantime, the U.S. media considers this “attachment” to Muslims overseas as ominous, threatening, and certainly un-American. For American Muslims, the debates about authority in Islam are related to the national debates about religious tolerance.

Grewal’s work is centered on the questions of authority in Islam that concerned her early in life and is still part of a core debate among American Muslims. Who speaks for Islam? What does it mean to be an authority? Does Islam need to be reformed and if so how? These questions are heard all the time in the US news media where they are presented as threatening, an indication of American Muslim’s allegiance to Islamic values, especially those in Arab countries, and not to true “American democratic values.”  Grewal’s description echoes the bigotry against early Irish immigrants – are they more loyal to the Catholic Church and the Pope than their new country? These same questions sound very different when heard from the “religious seekers” of her interviews, the American Muslim youth who travel to Cairo, Damascus, and Amman in search of the “real” Islam so it can be brought back to enrich their communities in the U.S. Grewal remembers this debate in the American Muslim community within her own family after they immigrated in the 1960s to a working-class Punjabi neighborhood in Detroit from a small town in Pakistan. Her father came on a university scholarship, but eventually dropped out because of a lack of funds. Only his being hired as a technician by Ford enabled the family to move to the suburbs and attempt to become part of middle class American life. Just like her father, she felt the opportunity of America was always enticing, but held just out of reach because she was a Muslim.

Grewal argues that contemporary debates about Islam need to be seen in the context of the history of American racial and religious exclusion. For racial and religious groups in America, there has often been a difference between being a legal citizen and being a social citizen. Grewal had first hand experience of this difference when her father placed her in a private nursery school when they first moved to Dearborn. Her teacher prevented her and the only other non-white student in the class, a black girl named Kecia, from taking part in class activities by putting them both at a separate table in the back of the room. As she says, “You may be invited to the table, but that doesn’t mean you are welcome.” She describes how Arab Muslims particularly “lack the social citizenship that blacks enjoy in post-civil rights America, in which blacks are frequently represented as quintessentially American even as they continue to suffer the brutalities of American racism.” (“Islam is a Foreign Country”) She argues that even though African Americans may be “accepted” as being part of a typical American community, i.e. social citizenship, that doesn’t mean they have achieved complete equality or social justice.

She described interviewing over 200 American Muslim youth who were examples of those targeted in the majority of post-9-11 studies conducted by the Pew Foundation, CNN, and others. These studies were focused on the “threat” to America from the Muslim community and designed to differentiate between the “good” and “bad” Muslims. The Pew Foundation Study of 2007 reassuringly titled Muslim Americans: Middle Class and Mostly Mainstream was taken up by the conservative media to highlight and scare Americans about the small percentage of politically disaffected of Muslim youth.

During her lecture, she used the example of the Super Bowl Coke Commercial that intended to illustrate the “multi-cultural patriotism” of Americans which instead received backlash from many who clearly questioned who really belongs in America. (America’s song should not be sung “in the terrorist’s language” and the hastag #SpeakAmerican trending.) As Grewal said, “Some get to represent America more easily than others.” She described the intense media focus on Dearborn, Michigan as the place to go for understanding the American Muslim mind. After 9-11, the first DHS field office was opened in Dearborn (even before New York City) and police and security presence in the area has always been heavy. Grewal described an incident from 2007 when she found herself in the middle of a loud crowd of Arab youth wavering Iraqi flags surrounded by police cars and news crews. In this case, it was a celebration of Iraq winning the Asia Cup, but for the press and police it was being treated as another domestic battle in the War on Terror. Through the lens of counter-terrorism, “a celebratory moment can look like a riot”.

These same youth are the ones traveling to informal networks of religious schools in other countries in the hope of finding the true tradition of Islam and bring that tradition back to their communities in America. Grewal describes this global world of the umma, called by the media the “Muslim World” (as if outside of American geographic and cultural borders), as an over 1 billion strong transnational community of multiple cultures and covering over 50 countries including the US. The media often turns not only these Muslim youth into potential terrorists, but also suggests there is something suspicious about these trips for religious education calling the informal madrasahs, or religious schools, “jihadi factories”. These travelers not only have to contend with the negative media’s depiction of their search for religious knowledge, but also with the expectations of the Muslim communities that financed their trip. Their trip may have been to study Islamic law in Cairo, but when they return their community may be expecting them to run the Sunday school for children.

Grewal concluded her talk by highlighting how the response from many journalists and even from some American Muslim leaders is to consider this ongoing debate in Islam over authority and the linkage of the American Muslim community to the global umma as an example of the need for reform in Islam. The U.S. media has turned a debate that has been active throughout Islamic history into defining the “good Muslim” who will accept the diagnosis that Muslims are collectively guilty for the actions of a few, that treat terrorism as a religious problem instead of a political one, and try to reassure the American public that Islam can be “rehabilitated”. For some American Muslim leaders, the response has been an attempt to “mainstream” their communities to reflect aspects of the dominant American culture. Instead she argues it is important to see the image of the “good Muslim” as hiding the tension of the community who desire a place within the American mainstream while also maintaining their transnational citizenship within the global umma.