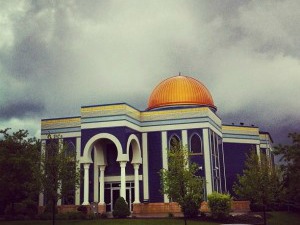 Early last week, the mosque down the street from my house was shot at by persons unknown during early morning prayers. Approximately 40 worshipers were in attendance, and thankfully none of them were hurt during the attack. I’ve written before about local resistance to the building of this mosque. In 2004, a series of contentious town hall hearings reflected the post-9/11 trend of local communities trying to block the building of new mosques in residential areas. However, years later, the mosque has existed in this residential area with little violence, and in fact, mosque-goers have been very active in building interfaith relationships with our neighboring synagogues and churches. As active members of the Southwest Interfaith Team, the mosque regularly hosts interfaith dialogues and iftars, and creates interfaith community service opportunities for the youth in our town.

Thanks to immigration, the United States happens to be the most religiously diverse country in the world and, unique among Western countries, is still quite religiously devout. Still, many people cannot handle the idea of new Americans – people whose very existence exposes them to new ideas, foods, ethnicities, and ways of worshiping. They are too afraid to get to know a new neighbor who professes a different faith. They are too angry to constructively deal with their changing neighborhood.

When the attack in my hometown happened, I was halfway across the globe, participating in an interfaith conference held in Doha, Qatar, where many of the participants hailed from religiously diverse societies, like Canada, Jordan, The Philippines and Sweden. Still, others hailed from comparatively homogenous societies, such as Georgia, Japan, New Zealand and our host state of Qatar. Among all the participants, however, was a bravery, an ability – or drive – to introduce oneself to the person sitting next to you. I met a Japanese imam, a Lebanese Catholic priest and a Brazilian rabbi. I met Jewish women rabbis developing social media based educational program, Catholic nuns wanting to hear the adhan and a Georgian priest who serves as a mentor to a British young man who identifies as Muslim. And I had enlightening conversations with everyone I met. These are people who know that even if their own societies are still relatively homogenous, telecommunications technology  and economic migration have opened up the world in uncharted ways. They all believe that their faith perspectives call them to embrace this brave new world.

Back in suburban Chicago, Friday prayers at the Prayer Center were sparsely attended this week of spring break. Which made the presence of dozens of members of local Presbyterian churches standing by the doors, passing out small scraps of paper, even more stark. They came to offer their support to their Muslim neighbors and condemn religious bigotry. 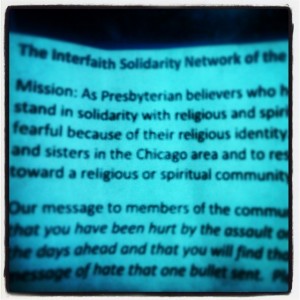 Here is the note in full:

The Interfaith Solidarity Network of the Presbytery of Chicago

Mission: As Presbyterian believers who honor all other humans of children of God we will stand in solidarity with religious and spiritual communities who are hurt, threatened, or made fearful because of their religious identity. We pledge to stand with and pray with our brothers and sisters in the Chicago area and to respond publicly to incidents where hate is expressed toward a religious or spiritual community.

Our message to members of the community of the Prayer Center in Orland Park: we understand that you have been hurt by the assault on your building. We pray that your spirit will be lifted in the days ahead and that you will find that the expressions of concerns by others will lessen the message of hate that one bullet sent. Please know of our concern.

I spent a week in a Muslim country, where the organizers of an interfaith conference showered their religiously diverse guests with sincere expressions of faith-based hospitality. I returned home to find paper evidence of my neighbors praying for my religious community in a most sincere Christian response to Islamophobia.

All praises are due to God, the Ever-Loving, the All Merciful.