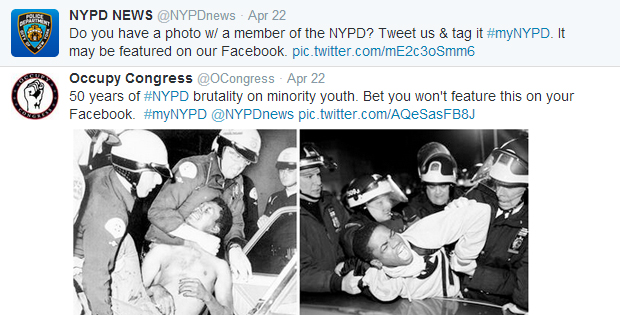 Why is it  that a certain movement that brings the injustices of our government reduced to nothing more than just a backlash that is meant to be forgotten? It is peculiar to make any change if this mentality of brushing off the young “liberals” as nothing more than idle citizens in the fight for pride in their nation.

This is exactly what happened on the ever-popular social platform, Twitter, where the New York Police Department (NYPD) attempted to create a positive image for themselves by starting the hashtag #myNYPD so young people would find the NYPD to be on their side.

Unfortunately for the NYPD, the hashtag became a beacon of light for the users of twitter to tweet photographs of the numerous displays of injustice and abuse the police system participates in on a daily basis. The pictures linked primarily display minorities and teenagers being detained for various crimes most of which are met with unwarranted abuse and treatment from police officials.

The onset of the entire campaign to help repair the image of the NYPD went horribly wrong, with Twitter users instead showing pictures of evidence of the immoral treatment citizens are receiving. However, the real worry of this phenomenon is the aftermath of the twitter phenomenon. Instead of applauding those who decided to make an inhumane act public, many news outlets are directing the attention to the failure of the NYPD to restore their credibility. News sources known for covering terrorist attacks, such as CNN, have all of a sudden used their own influences on social media to redirect attention to something as petty and unimportant as how ridiculous the “backlash” is , seemingly to detract attention to the true issue at hand.

The rift that forms between those who have the safety and privilege of not being subjugated to police force is continously growing, and dividing people. Some people have no choice but to participate in altercations that involve police force. The concern here is why nothing of actual police brutality is being discussed, and why nobody seems to care anymore for the situation (at least in the mainstream media).

Interesting: #myNYPD analysis is “NYPD doesn’t know how to use Twitter,” not “NYPD shouldn’t beat and murder and harass.” @SASYOUTHNYC

As @LaKeniaem puts it, the emphasis in this situation should focus on the wrongdoing of the NYPD and not on the failure of Twitter. This is a sensitive issue, and should be focused on with all attention, especially if innocent civilians are effected by it. The silence in the media cannot be sustained anymore, as people want answers to brutality effecting the population as a whole.