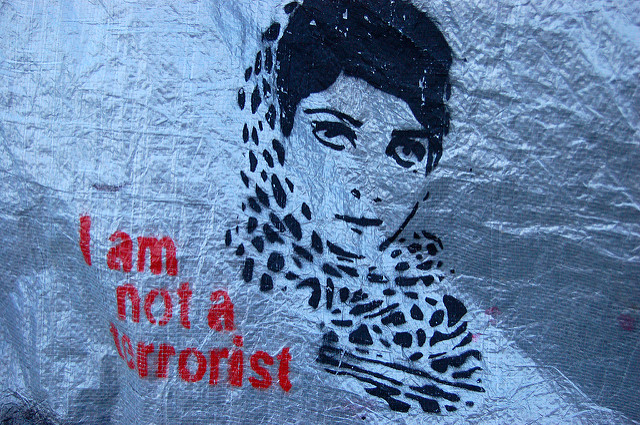 I first learned about the incident through a tweet from Boston-based journalist Omar Sacirbey: “Did you hear we caught a terrorist last week?” And I said to myself: “Why, no, I did not.” In fact, most probably, much of the nation did not hear about the terrorist that was caught in the Houston area on March 27.

Omar Sacirbey learned it from journalist Robyn Pennacchia, whose article he linked in his tweet. The man, Robert Talbot Jr., was arrested by the FBI on charges of “attempted interference with commerce by robbery, solicitation to commit a crime of violence and possession of an explosive material.”

FBI agents in Texas have arrested a man who allegedly was plotting to use C-4 explosives and weapons to kill police officers, rob banks and armored cars, and blow up government buildings and mosques, authorities announced today.

After setting up a Facebook page called American Insurgent Movement (AIM), Talbot allegedly sought to recruit five or six like-minded people who wanted “to restore America Pre-Constitutionally and look forward to stopping the Regime with action by bloodshed.”

When he was caught, he had guns and explosives with him. What’s more frightening, part of his plan included attacking Muslims. He wrote on his Facebook page:

That is exactly what I will have my men do during the heist. Same goes with the Muslims. Mosques are to be a blast! With three of my guys with FA [full automatic] AK’s [AK-47 semi-automatic rifles], we will send that white house worthless piece of dirt and his Muslim brotherhood a message they will never forget.

Thank God he was caught.

Yet, did you hear about it on any of the major news outlets? In fact, as Pennacchia correctly points out, most of the articles are “from local Texas news sources. Very few national outlets even bothered with the story.” When I did a Google News search, most of the coverage was from blogs. And there were not many links to begin with.

In fact, most of the articles about Talbot – other than the one by Pennachia and the SPLC – did not even mention that he was a terrorist. The first sentence of the Huffington Post’s piece read:

A Houston-area man suspected of leading an anti-government group appeared in federal court on Friday to face charges of trying to rob an armored car with explosives and plotting to blow up U.S. government buildings.

Really? Not a terrorist?

While that is bad enough, the fact that there was barely a peep about this arrest in major media outlets is disturbing. What if this man had been a Muslim? Do you think there would have been such glaring media silence?

Absolutely not. It would likely have been major news, splashed across all major networks. There would have been deep investigations into the man, and his family, and his background, and his religious beliefs. They likely would have gone to the mosque at which he attended and maybe even interviewed its Imam.

And, of course, the “experts on Islam” would have been called upon to comment on how this man’s religious beliefs are connected to his actions. And these “experts” would likely have said that this is typical of all Muslims and of Islam itself.

But, since he is not Muslim, there was deafening silence. This is despite the fact that this man’s violent fantasies were connected to his religious beliefs. Talbot described his group, AIM, as (emphasis added by me):

a Pre-Constitutionalist Community that offer those who seek True patriotism and are looking for absolute Freedom by doing the Will of God. Who want to restore America Pre-Constitutionally and look forward to stopping the Regime with action by bloodshed.

This is not the first time that this has happened. It seems that the (fallacious) notion of “not all Muslims are terrorists, but all terrorists are Muslim” sits deep in the minds of many people in our society. Yet this has been shown to be not true again and again and again.

Terrorism has no faith, no ethnicity, no background. It is a criminal enterprise, and it is an equal opportunity employer. The sooner people understand this, the better our society will be.