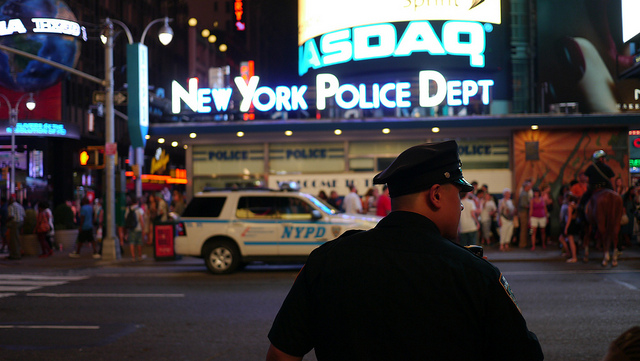 New York has not been the most welcoming city for Muslims. The memories of the Twin Towers in flames and crumbling to the earth remain fresh in the minds of many residents, and prejudice has been a reality for many. However, the people of New York have always been a diverse collection of communities, and local Muslims have fought hard against the bigotry amidst their peers.

Instead, it is the institutionalized prejudice of the city government which has long been the real specter haunting the Muslim communities of the city that never sleeps.

The New York Police Department (NYPD) has continued a policy of invasive surveillance and monitoring over Muslim communities since 9/11, including the use of undercover informants in Muslim communities, the classification of entire mosques as terrorist or suspected terrorist enterprises, and an army of Arabic translators larger than that of the FBI’s.

The results of these policies have (no surprise) failed to accomplish their supposed goals and have instead contributed to numerous long-term problems in Muslim-American relations. According to a sworn testimony by Lt. Paul Galati, the NYPD’s surveillance program of Muslim life had not yielded a single criminal lead during his six year tenure.

Instead, these policies have ensured that the Muslim communities of New York City have continued to live in a state of alienation and suspicion from the law enforcement they rely upon, and severely exacerbating growing tensions between Muslims and their governments.

NYC Muslims live in a world of self-censorship in which Islamic life has been curtailed from within as a reaction to increased pressure upon mosques, college campuses, and public activism from the NYPD. By viewing increased religiosity as an indicator of radicalization, the NYPD has profiled Muslims who choose to profess their faith in a socially tangible manner, and have consciously pursued policies to increase stigma against Muslims in the public eye as well as (thanks in large part to the continued use of Muslim informants and undercover law enforcement) fomenting distrust amongst Muslims themselves.

Recently, the NYPD has officially announced the end to the secret program whose purpose was to spy on Muslims—known by its official euphemism, the “Demographic Unit.”

The purpose of this unit was to collect information on Muslim communities to better identify potential terrorists blending into the fabric of their society, utilizing specific “ancestries of interest” to help target potential individuals and neighborhood dynamics.

The end of the Demographic Unit’s time patrolling the streets of New York comes on the heels of the newly sworn-in Mayor de Blasio’s promise to reform the NYPD’s policies, which have come under attack in recent years for what is seen as discriminatory practices against minority communities.

This comes as a great victory for Muslims in America, as one of the longest standing pillars of institutionalized persecution in this country has taken one step closer towards collapse. However, the dismantling of surveillance infrastructure in New York should prompt a greater discussion of Muslim society amidst the gradual expansion of the American surveillance state.

The public has been (or, at least, should be) shocked by recent exposures revealing the extent of federal surveillance on American citizens, including data on phone records and online activity. The fact that the ongoing surveillance of Muslim communities in New York has gone on for so long without public outcry is made ironic by the fact that the federal government is collecting data on millions of Americans, Muslim and non-Muslim alike.

The American people are now left with a horrifying consequence of the post-9/11 security apparatus, the creation of which they were all too complicit in.

Under federal law, the FBI was prohibited from receiving access to documents gathered by the NYPD’s Demographic Unit. That meant that the NYPD could still maintain some autonomy over the nature and scope of their surveillance operations. It also meant that the law enforcement agency could be subject to local political pressures—hence de Blasio’s decision to shut down the program.

Since the federal government does not show any signs of reforming its surveillance policies any time in the near future, it is unlikely that the surveillance vacuum will be left unfilled. Instead, it is increasingly likely that the FBI will now take up the responsibility of monitoring the Muslims of New York City utilizing a data network which knows no geographic jurisdiction and has virtually no government accountability.

Should the contemporary experience of Muslims in New York fade from public memory, the American people will have missed their last chance to develop full consciousness of just what they are up against. With public stigma directed towards Muslims both in America and abroad, the federal government was able to greatly expand its powers in the aftermath of 9/11 under the guise of “defending the homeland.”

Ultimately, no community is safe from such an expansion of federal surveillance. The data is already in the hands of numerous intelligence agencies who have demonstrated that they will use law enforcement as a tool for social repression—the only question that remains is who will be repressed next?

Americans cannot allow the tensions with their Muslim neighbors to continue shielding the government from accountability over their surveillance programs. The struggle for civil liberties is far more real, if much less apparent, than some existential war between Western life and Islam.

The time has come to act on this reality, or we may someday remember Islamophobia as the scam that fooled us all.