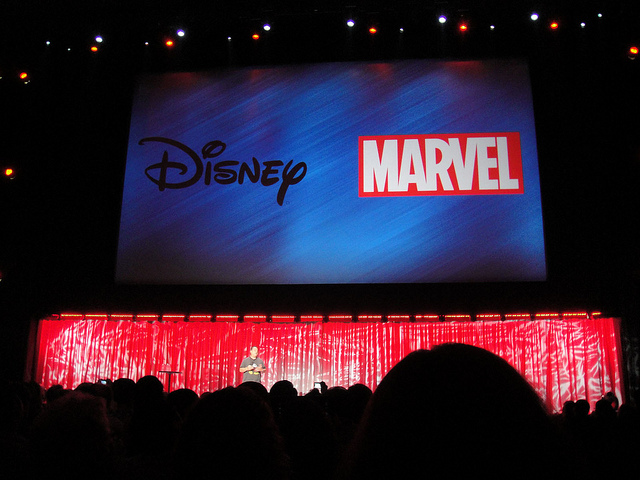 After learning about the cancellation of the cable television series by ABC Family channel, Alice in Arabia, I found it interesting that a major network such as ABC would make it seem like they were trying to disempower Arabs and Muslims. With that in mind, I find it even more interesting that the Disney Company owns Marvel, the same company that releases the Ms. Marvel comic books. There is a connection between what is being promoted with Alice in Arabia and what is being promoted with Ms. Marvel. While Disney is reinforcing stereotypes of Muslims, Disney is also trying to shatter stereotypes and misconceptions of Muslims with the release of the Ms. Marvel comic book.

To those who are unfamiliar with the Ms. Marvel comic book, Ms. Marvel’s secret identity is Kamala Khan, a 16 year old Muslim girl who is Pakistani American. She lives at home in New Jersey with her brother Aamir, her mother and father. Kamala has body morphing powers and the ability to save many lives, but most of all Kamala is dealing with being a high school student that is juggling her daily life with her conservative Pakistani parents and her non-Pakistani peers. Marvel seems like they are taking a step in the right direction with a Muslim character headlining a book.

Coupled with Ms. Marvel, Sana Amanat, Marvel’s editor of Ms. Marvel, Elektra, Captain Marvel, and New Warriors gave a speech at TEDxTEEN on in March 2014 titled, “Myths, Misfits and Masks”. Amanat went on to incorporate terms such as “stereotype threat” and “mirror neuron theory” to prove her point of how growing up as a Muslim South Asian American led her to identify with superheroes such as the X-Men. A statement from Marvel’s official website stated a quote by Amanat,

“Speaking at TEDXTeen was one of the highlights of my career. Not only because I was amidst such incredible individuals, but also I could finally share with the world how empowering and inspiring super hero stories can be.”

It is reassuring that Marvel is taking a stand against bigotry, discrimination, and stereotyping by adding certain characters to its list of superheroes that are not the typical white characters that have touched our lives. This does not go without mentioning that Disney is the same company that bought Marvel for $4 billion and was promoting a negative view of Muslims and Arabs with the show Alice in Arabia. This is not the first accusation that critics have made about the Disney Company. To illustrate, the documentary Mickey Mouse Monopoly: Disney, Childhood & Corporate Power traces the notions of race, class, and gender that can be found in countless Disney classic animated movies such as The Lion King, Aladdin, The Jungle Book, etc. In another documentary that is based on a book by Jack G. Shaheen, both entitled Reel Bad Arabs: How Hollywood Vilifies a People, Shaheen argues that negative depictions of Arabs have been reoccurring in Hollywood for decades. In other words, Disney coming out with a show of a young woman with American and Saudi descent being kidnapped and  held hostage is a recycled formula from the Disney vault.

Moreover, Disney leaves a contradictory and confusing message for the public at large. Are they trying to empower or disempower Muslims? The lines have been blurred with the creation of Alice in Arabia but it has been even blurrier with the creation of Ms. Marvel. Kamala Khan can empower not only Muslims, but anyone who is struggling with finding a hero to identify with. On the contrary, ABC Family’s Alice in Arabia may not echo the same effect.

Alice in Arabia’s writer Brooke Eikmeier argues that she intended the main character Alice to be a “mixed-race girl caught between the cultures but more familiar with the American side.” Eikmeier was aware that the show was going to cause controversy with many people but she was in hopes that people would warm up to it. In addition, Eikmeier wanted the main character to delve into various aspects which include the Muslim Brotherhood, domestic violence, and the topic of women working in lingerie stores. With all of this in consideration, Eikmeier completed the pilot to Alice in Arabia and sent it to ABC Family cable network. However, when Eikmeier read the description of the episode, there was a contradiction of what the show was meant to be and how it was marketed. She describes Disney’s take on the show with being a

“high-stakes drama series about a rebellious American teenage girl who, after tragedy befalls her parents, is unknowingly kidnapped by her extended family, who are Saudi Arabian.”

In any event, the show was cancelled on March 22 due to calls for boycotting airing its pilot episode.

Disney is sending mixed signals to what the public should believe their views on Muslims and Islam. As a Muslim myself, and as someone who used to watch Disney movies as a child, I can say that in 2014, recycled stereotypes for the sake of entertainment is discouraging to witness. Eikmeier may have had separate intentions for what she was accused of but the overall premise still holds true. Disney cancelled Alice in Arabia because they took notice of the negative reactions it received. Maybe next time this media empire will be more considerate of the people who try to unmask their secret identities.

Racists on the Red Line: Meeting conflict with conversation

Is the customer always right?: How prejudice in service industry harms employees