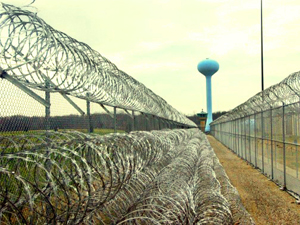 In late April, Bureau of Prisons’ (BOP) documents describing the process for designating prisoners to Communications Management Units (CMUs), or as some call them “Guantanamo North”, were made public by a Center for Constitutional Rights (CCR) lawsuit filed in 2010. The documents confirm what was suspected all along – CMU prisoners are being denied due process from their initial labeling as a CMU prisoner to their inability to challenge their status. Plus over sixty percent are Muslims although Muslims comprise only six percent of the federal prisoner population.

Communication Management Units (CMU) are special prisons opened secretly with no public notice first in Terre Haute, Indiana in 2006 and then in Marion, Illinois in 2008. This first-of-its-kind prison in the US appeared to be a way of isolating prisoners convicted mainly of terrorism-related offenses from the rest of the prison population. This is only speculation, as the BOP never published any information at all about these secret prisons until four years later. Human Rights groups have called them “Guantanamo North” and “Little Guantanamos” given that two thirds of the prisoners are Muslims; there is a heavy use of solitary confinement;  24 hour surveillance; and  little oversight by anyone on how prisoners are treated. They are also reminiscent of the Bush administration’s secret prisons in allied countries for terrorists suspects, except in this case the secret prisons are in Indiana and Illinois. An NPR report on the make-up of the prisoner population said initially, the vast majority of the inmates were Muslim.

When the Terre Haute unit opened in December 2006, 15 of the first 17 inmates were Muslim. As word got out that the special units were disproportionately Muslim, civil rights lawyers say, the Bureau of Prisons started moving in non-Muslims. The group included tax resisters, a member of the Japanese Red Army and inmates from Colombia and Mexico. Inmates say the guards there called them “balancers.”

Not only were these prisoners unable to determine why they were sent to a CMU, the limitations on their ability to communicate with anyone was severely restricted – much more so than anywhere else in the federal prison system. According to the CCR fact sheet on CMUs

Unlike prisoners who are convicted of serious crimes and sent to a federal supermax facility, CMU inmates have no way to review the evidence that sent them there or to challenge that evidence to get out. Unlike other BOP prisoners, individuals detained in the CMUs are completely banned from any physical contact with visiting family members and friends. Other types of communication are also severely limited, including interactions with other prisoners and phone calls with friends and family members. Prisoners in the isolation units are barred even from contact with other prisoners in the general population. In addition to the stigma of being placed in what is widely known as the “terrorist” unit, individuals detained in the CMU have limited access to educational and other opportunities, including programs that facilitate reintegration and employment efforts upon their release.

Many CMU prisoners have neither significant disciplinary records nor any communications-related infractions. However, bias, political scapegoating, religious profiling and racism keep them locked inside these special units.

Under pressure from the CCR lawsuit and other human rights organizations, the BOP finally published guidelines for the CMUs in 2010, four years after the first CMU was created. The guidelines indicated that rationale for creating the CMUs was to completely control the ability of these prisoners to communicate with each other, their families, and the outside world. The level of isolation and control over the prisoners would be even far beyond that  in “supermax” prisons.

The purpose of CMUs is to provide an inmate housing unit environment that enables staff to more effectively monitor communication between CMU inmates and persons in the community. The ability to monitor such communication is necessary to ensure the safety, security, and orderly operation of correctional facilities, and protect the public. The volume, frequency, and methods, of CMU inmate contact with persons in the community may be limited as necessary to achieve the goal of total monitoring.

But in reviewing the published criteria for selecting prisoners beyond those convicted of terrorism-related offenses, the criteria are very broad and can apply to a large number of prisoners in the system. For a prisoner to challenge this designation or work his way out of the CMU is extremely difficult and has not been successful for anyone who has tried.

Even with these guidelines, there is still no justification for the lopsided make-up of the CMU prisoner population. As the CCR CMU Factsheet describes, the population at the Marion, Illinois CMU is 72 percent Muslim, 1,200 percent higher than the national average of Muslim federal prisoners and the Terre Haute CMU population is about two-thirds Muslim, 1,000 percent more than the average. The Muslims detained in these two CMUs are both African American (many who converted during their time in the prison system) and prisoners of Middle Eastern descent.

Not all of the CMU prisoners are Muslim and some are political activists. A recent statement by Daniel McGowen, an environmental activist, on the publication of  documents from the CCR suit, shows other types of prisoners who were targeted for CMU incarceration. McGowen is currently at a halfway house in Brooklyn, serving the last few months of a seven-year sentence for his role in arsons credited to the Earth Liberation Front (ELF) at two lumber companies in Oregon in 2001. His case was part of the prosecution of environmental activism as a form of terrorism. After initially serving his sentence at a prison near his home, he was abruptly transferred to the CMU in Terre Haute. After three years of a law suit to determine why he had been sent there, the just released documents suggest it was mainly based on his political opinions. He came to this conclusion by reviewing memos from Leslie Smith, the Chief of the BOP’s Counter Terrorism Unit that were used to justify his move to the CMU.

My attempts to “unite” environmental and animal liberation movements, and to “educate” new members of the movement about errors of the past; my writings about “whether militancy is truly effective in all situations”; a letter I wrote discussing bringing unity to the environmental movement by focusing on global issues; the fact that I was “publishing [my] points of view on the internet in an attempt to act as a spokesperson for the movement”; and the BOP’s belief that, through my writing, I have “continued to demonstrate [my] support for anarchist and radical environmental terrorist groups.”

One of the most well known prisoners at the Marion, Illinois CMU was a defendant in the infamous Holy Land Foundation (HLF) case, Ghassan Elashi, the HLF Chairman, who is serving a 65-year sentence. This is the case that the ACLU described as having “violated the fundamental rights of American Muslims’ charitable giving in accordance with their faith, seriously undermining American values of due process and commitment to First Amendment freedoms.” Since the Supreme Court turned down the appeal of the Holy Land Foundation case in 2012, Ghassan Elashi will remain in Illinois’ own “Little Guantanamo”.

In 2010, The Center for Constitutional Rights (CCR) filed a federal lawsuit Aref, et al. v. Holder, et al. against Attorney General Eric Holder, federal Bureau of Prisons (BOP) officials, and the BOP itself, challenging policies and conditions at the CMUs as well as the circumstances under which they were established. In November 2012, CCR amended its complaint to bring new retaliation claims based on previously-secret documents. It is these documents released a week ago that demonstrated that the BOP assigned CCR’s clients to the CMUs because of their Constitutionally-protected political activism and speech. “The documents revealed today show that CMU prisoners have been denied due process at every step, from designation to review,” said CCR Senior Staff Attorney Alexis Agathocleous. “The CMUs impose harsh restrictions on prisoners, including a ban on even momentarily hugging their families. Meanwhile, the BOP has denied hundreds of prisoners, who are mostly Muslim, the opportunity to understand or rebut the rationale for their placement, or a meaningful review process to earn their way out,” The documents also showed that the decision-makers are not required to, and do not, document their reasons for selecting a prisoner for CMU placement. As a result, it is effectively impossible for prisoners to challenge their designation.

On April 23, 2014, the CCR case moved for summary judgment (to obtain a ruling on the case without going to trial), presenting all the evidence that demonstrates a denial of due process for CMU prisoners. Hopefully if the CCR case is successful, it will be the first step in shutting down these CMUs that continue to avoid oversight and violate prisoners’ rights. Even though the original Guantanamo is still operating outside of U.S. and international law, maybe these “Little Guantanamos” in Illinois and Indiana can be closed for good.