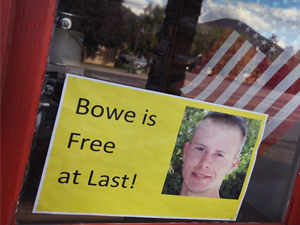 The press “controversy” around the release of Bowe Bergdahl has been the perfect storm of Islamophobia (Bergdahl’s father’s beard = he’s Muslim = he’s a terrorist); only traitors are anti-war (Bergdahl expressed doubts about the Afghanistan war so he deserted); and Guantanamo prisoners can’t be released (except when we can trade them for a captured U.S. soldier).

Much of the focus on the coverage of Bowe Bergdahl, held by the Taliban for five years and released last week in exchange for Taliban prisoners in Guantanamo, has been on characterizations by Fox News commentators like Bill O’Reilly (Bergdahl’s father acted Muslim at the White House) and other conservatives like former GOP congressman Allen West (His father claimed the White House for Islam). For Bill O’Reilly, Robert Bergdahl in his appearance with President Obama looked, talked, and acted like a Muslim.  “Okay, is he over the edge because of his boy? Maybe. And I feel bad for him if that’s the case, but what he did and how he presented himself was inappropriate”.  Apparently, even “acting like a Muslim” at the White House – wearing a beard, speaking in a foreign language, and thanking Allah – is “inappropriate”.

Outrage at the Islamophobia behind conservative attacks on a father whose son has just been released from five years in captivity is more than justified, but in the extensive press coverage countering this ridiculous stereotyping, other as important issues are overlooked.

There has also been increasing coverage of the circumstances of  Bergdahl leaving his post in Afghanistan and being captured by the Taliban. Reports at the time indicated that he had been having doubts about the war that he expressed in letters home; he left his base alone; and was easily captured by the Taliban at a nearby village. A Pentagon investigation in 2010 concluded he walked away from his unit, but did not characterize this as a desertion. Conservative and even general media sources are starting to suggest that Bergdahl did desert and even allowed himself to be captured by the Taliban. The most extreme reports are that he is a traitor and purposely “went over’ to the other side. All of these responses are a way of demonizing soldiers who are critical of the war in Afghanistan – a position about the war that includes 66% of the American public who believes “considering its costs to the United States versus its benefits. It has not been worth fighting”. Like the Iraq war, the war in Afghanistan is now considered a failure by a large portion of the American public, but many still need to pretend that this isn’t the case. After being part of counterinsurgency operations in Afghanistan, Bergdahl was disillusioned with the war, captured, held for five years, and finally released after a two and a half year negotiation. He will be returning to people who want to vilify him for his anti-war feelings to the extent that his hometown of Hailey, Idaho had to cancel his homecoming celebration because of “growing questions about the circumstances of [his] capture” and being “deluged with calls and letters of complaint that it was honoring a deserter”.

The other controversy is related to the Guantanamo Taliban prisoner swap made to release Bergdahl. Most of the press has been focused on whether: the “U.S. negotiates with terrorists” or not; a deserter is worth five Taliban “leaders”; and President Obama followed proper protocol in agreeing to the prisoner exchange. Lost in all this is the fact that President Obama seemed to have no difficulty releasing Guantanamo prisoners so “no soldier will be left behind”, but seems unable to release the other 149  prisoners,  many not charged with any crime. In 2013, more than 100 Guantánamo detainees took part in a hunger strike to protest their conditions. There does not seem to be a way of freeing hunger striker Ahmed Rabbani, for example, who has been held without charge for more than 10 years. But there was a way of legally allowing him to be force fed while on hunger strike, a procedure considered torture by many, which in his case caused him to contract a chest infection leading him to repeatedly vomit blood. Rather than complaining that five Taliban prisoners from Guantanamo are being released in exchange for Bergdahl, why is there not outrage that the U.S. continues to keep over a hundred prisoners in Guantanamo without trial or hope for ever being released?

After five years of being held prisoner including reports of being tortured, Bergdahl is returning to a country that attacks his father for acting “inappropriately Muslim” at the White House; accuses him of being a traitor; releases prisoners from Guantanamo only because he is a soldier; and makes death threats against his family. There is a lot to be outraged by in the story of Bowe Bergdahl, Islamophobia is only one of so many reasons.

Torture in the land of make believe: Zero Dark Thirty bends the truth