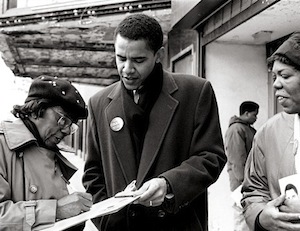 Yesterday, The Barack Obama Foundation announced that they received 13 requests for qualifications (RFQ’s) from universities and institutions in New York, Hawaii and Chicago to host the Barack Obama Presidential Library and Museum. However, the RFQ’s of Chicago institutions did not include Michael Madigan’s proposed $100 million funding. Last month, lawmakers agreed to postpone the decision on Madigan’s bill until next session, despite the Monday deadline.

Madigan’s bill called for funding to support “the construction of a presidential library and museum dedicated to the legacy of President Barack Obama”. The bill, however, was met with opposition from both Republican and Democratic congressmen who argued that the library and museum should be privately funded, the way it has been for previous presidents. Madigan did not call for a vote, leaving the issue to be taken up by lawmakers in the fall.

Many also argue that Illinois does not have the means to appropriate that money when the state is billions of dollars in debt and unemployment is at its peak. Jane McAnaney from the Illinois Policy Center argued in an editorial that simply because previous presidential libraries have received funding from state governments does not mean Illinois can afford to do the same.

The University of Chicago is hoping to bring the library and museum to the South Side, where the president spent years as a community organizer in addition to teaching at the law school. The University of Illinois at Chicago, on the other hand, is requesting the location be closer to the west loop, according to the Chicago Tribune.

A Foundation spokesperson told the Chicago Monitor, “Through the RFQ process, the Foundation will narrow the field to a smaller subset of entities which will get a more detailed RFP, or a request for proposals, later this summer. The Foundation will evaluate those proposals on a fair and objective basis during the fall and share top recommendations with the President and First Lady, who will make the final decision. We anticipate a final site selection announcement will be made in early 2015.”

In a press release announcing the RFQ deadline, founding board member and long time friend of the president, Martin Nesbitt, expressed the Foundation’s hopes for the institution. “Our goal is to build a library of which the whole country, and hopefully the whole world, can be proud. Our vision is to create a space that reflects President Obama’s values and priorities throughout his career in public service and serves as force for good in the surrounding community and throughout our world.”