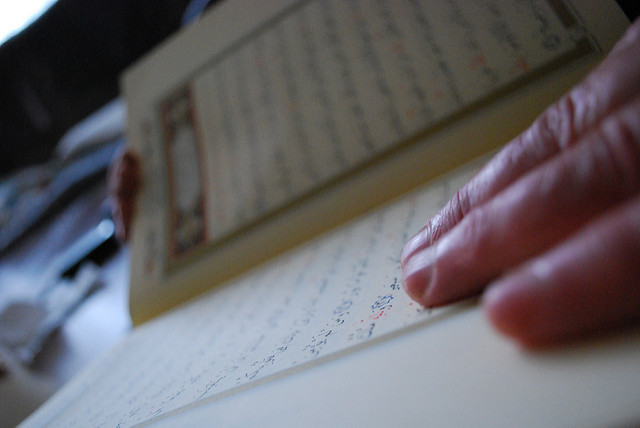 Pamella Geller has put up bus ads in Washington, D.C. that say:

Her contention is flat-out wrong.

In the Name of God: The Infinitely Merciful and Compassionate Beloved

The Quran is full of positive references to the Children of Israel and Jewish history. Many of the Jewish Prophets, in fact, are mentioned more by name than the Prophet Muhammad himself (peace be upon them all). Here is what the Quran says about the Torah, the Jewish Scripture:

Here is but a small bit of what the Quran says about the Jewish Prophets:

Say ye: “We believe in God, and the revelation given to us, and to Abraham, Ishmael, Isaac, Jacob, and the Tribes, and that given to Moses and Jesus, and that given to (all) prophets from their Lord: We make no difference between one and another of them, and to Him have we submitted ourselves. (2:136)

Behold, we have inspired thee [O Prophet] just as we inspired Noah and all the prophets after him – as We inspired Abraham, Ishmael, Isaac, Jacob and their descendants, including Jesus, Job, Jonah, Aaron, and Solomon; and as We vouchsafed unto David a book of divine wisdom (4:163)

And We bestowed upon him [Abraham] Isaac and Jacob, and We guided each of them as We had guided Noah aforetime. And out of his offspring, [We bestowed prophethood upon] David, Solomon, Job, Joseph, Moses and Aaron: for thus do We reward the doers of good. And upon Zachariah, John, Jesus, and Elijah: ever one of them was of the righteous; and [upon] Ishmael, Elisha, Jonah, and Lot: every one of them did We favor above other people (6: 84-86).

Now, indeed, there are seemingly tough verses in the Quran about the children of Israel:

Those of the children of Israel who were bent on denying the truth have [already] been cursed by the tongue of David and of Jesus, the son of Mary; this because they rebelled [against God] and persisted in transgressing the bounds of what is right. (5:78)

There a few points here: first, the verse does not say that “all Jews are cursed.” The verse says that those children of Israel who did wrong were cursed by David and Jesus. And here is the scriptural evidence for this:

Ye serpents, ye generation of vipers, how can ye escape the damnation of hell? Wherefore, behold, I send unto you prophets, and wise men, and scribes: and some of them ye shall kill and crucify; and some of them shall ye scourge in your synagogues, and persecute them from city to city:That upon you may come all the righteous blood shed upon the earth, from the blood of righteous Abel unto the blood of Zacharias son of Barachias, whom ye slew between the temple and the altar. (Matthew 23:33-35)

The wrath of God came upon them, and slew the fattest of them, and smote down the chosen men of Israel. For all this they sinned still, and believed not for his wondrous works.Therefore their days did he consume in vanity, and their years in trouble. (Psalm 78:31-33)

Moreover, there are some verses in the Quran that are oft-quoted by those who claim “Islamic Jew-Hatred” which seem to call Jews “apes” and “pigs and monkeys”:

And well you knew those among you who transgressed in the matter of the Sabbath. We said to them ‘Be ye apes, despised and rejected.’ (2:65)

And ask them about that town which stood by the sea: how its people would profane the Sabbath whenever their fish came to them, breaking the water’s surface, on a day on which they ought to have kept Sabbath – because they would not come to them on other than Sabbath-days!…And then, when they disdainfully persisted in doing what they had been forbidden to do, We said unto them: ‘Be as apes despicable!’ (7:163-166)

Say: ‘Shall I tell you who, in the sight of God, deserves a yet worse retribution than these? They whom God has rejected and whom He has condemned, and whom He has turned into apes and swine because they worshiped the powers of evil: these are yet worse in station and father astray from the right path [than the mockers].” (5:60)

Indeed, some Muslims have claimed that Jews are “pigs and monkeys,” apparently based on these verses. As horrible as their claim is, their use of the Quran is completely incorrect.

As the verses clearly show, the Quran is not saying “Jews are apes and monkeys.” In fact, there is no verse in the Quran – none – that says “Jews are apes and monkeys.” The verses above speak about the Sabbath Breakers: it was they who were turned into apes because they broke the law of the Sabbath. Commentator Muhammad Asad (a Jew who converted to Islam) explains this story:

Under Mosaic Law, they were obliged to refrain from all work – and, therefore, also from fishing – on Sabbath-days, with the result that the fish were more plentiful and would come closer to the shore on those days: and the inhabitants of the town took this as an excuse to break the Sabbath-law.

In fact, according to Asad, the term “be ye apes” may only be metaphorical and not literal:

As for the substance of God’s decree, “Be as apes despicable”, the famous tabii [student of the Prophet’s (pbuh) Companions] Mujahid explains it thus: ‘(Only) their hearts were transformed, that is, they were not (really) transformed into apes: this is but a metaphor (mathal) coined by God with regard to them, similar to the metaphor of ‘the ass carrying books’ (62:5)”…A similar explanation is given by Raghib. It should be borne in mind that the expression “like an ape” is often used in classical Arabic to describe a person who is unable to restrain his gross appetites or passions.