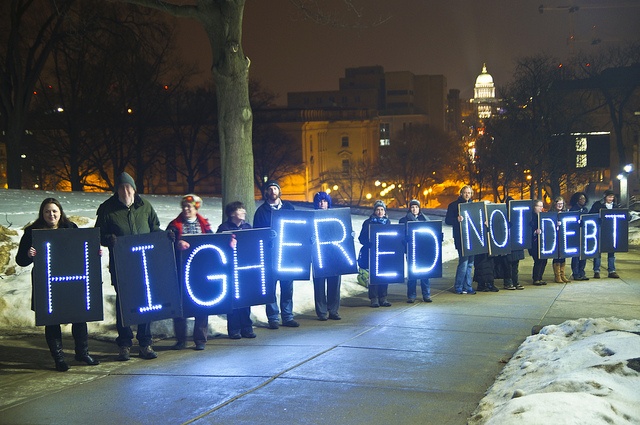 This past week President Obama has signed a student loan forgiveness bill entitled Pay As You Earn (PAYE), that makes student loans more affordable. The loan borrower now only pays 10 percent of their monthly income in order to prevent borrowers to fall behind on payments.

This past week President Obama has signed a student loan forgiveness bill entitled Pay As You Earn (PAYE), that makes student loans more affordable. The loan borrower now only pays 10 percent of their monthly income in order to prevent borrowers to fall behind on payments. Pay As You Earn is a bill from 2010 that is expanding on using monthly income to determine monthly debt payments.

Although there are over 37 million Americans in debt with a total student loan debt accumulating to more than 1.2 trillion dollars, the program extends to only 5 million borrowers. Students are struggling with day to day payments especially with the increase of interest rates. The program will not be implemented until December 2015 at the earliest.

“No hardworking young person should be priced out of a higher education.” President Obama said.

According to the White House, Pay As You Earn has several options for borrowers. It also lists other changes that are planned to ensure that higher education is more affordable while guaranteeing more students graduate with college degrees. And if payments are done on time loans will be forgiven in 20 years, 10 years if the borrower works in public service or a nonprofit.

Even though PAYE is supposed to go into effect by the end of 2015, not many people know about it. There isn’t as much awareness and advertising like the Affordable Health Care program. And there doesn’t seem to be a guideline for who is eligible and where to apply. However, there is an online calculator that helps the borrower plan for loan repayment with the PAYE program.

Senator Elizabeth Warren has also been voicing concern of high student debt. In an attempt to reduce student loan debt, Senator Warren proposed the Bank on Students Emergency Loan Refinancing Act, a bill that aims to tax the wealthy. The bill was voted on this week, but failed 56-38. The bill needed 60 votes in order to continue. “We’re not giving up.” Senator Warren said.

Another event that took place this week regarding student loan debt was the Q&A session President Obama had with questions off the White House Tumblr.  A question was asked about what he is doing to lower the cost of tuition so debt won’t be necessary, he responded,

“We have to find ways to…lower the cost on the front end and then if you do have to supplement whatever you have to pay with borrowing, we got to make sure that that is a manageable debt.”

The Terminators: Is America’s drone campaign really winning the War on Terror?