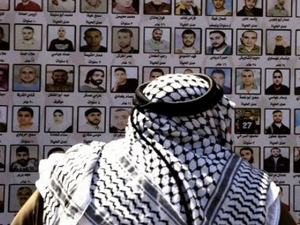 As Ramadan approaches next week, remember those who fast for dignity and human rights. More than 250 Palestinian prisoners have been on hunger strike for two months and over 80 have been hospitalized. More than 125 are administrative detainees – held without charge or trial.

Two years ago over 2,000 Palestinian prisoners, many on administrative detention, launched a mass hunger strike in multiple Israeli prisons to protest conditions, but also to demand an end to the practice of re-arresting prisoners on administrative detention after they had been released. The most well-known prisoner from the strike was Samer Issawi, who was on hunger strike for over 8 months and near death, before he was released to his home in East Jerusalem after refusing to be deported.

Since that mass hunger strike ended in 2013, multiple administrative detainees who had been released have been rearrested including, as of yesterday, Samer Issawi. Currently, there are over 5,000 Palestinian prisoners with over 190 on administrative detention. Over the last month, the Israeli Army’s “Operation Brother’s Keeper” for three Israeli teenage settlers who are missing after hitchhiking near Hebron has resulted in searches of 1,350 West Bank sites, more than 330 arrests, and five Palestinian deaths including a 14 year old boy. Israeli security officials estimate that one in six Palestinian prisoners released in the exchange for Israeli soldier Gilad Shalit in 2011 have been re-arrested during this “Operation Brother’s Keeper”.  As part of this operation, the Israeli Army revealed in military hearings last week that they plan to issue new administrative detention orders to about 200 of those recently released. This will double the number of Palestinian prisoners under administrative detention. This search has not brought back the Israeli teenagers, but has greatly increased the number of Palestinian detainees as well as drawn attention away from the Palestinian prisoner hunger strike as it reaches a critical stage. Typically the heath of those on hunger strike begins to degrade rapidly after 60 days.

Basil Farraj, whose father, Abdul Razzaq Farraj, the administrative and financial director of the Union of Agricultural Work Committees, has been on hunger strike for over 50 days, and is currently shackled to a hospital bed. Farraj describes the concern of the hunger striker’s families.

Why are we not permitted to see our loved ones? They are on the verge of death. A lot of them. We have got reports that they are on their hospital beds, they are bleeding, they are nauseous, some of them might face full-body paralysis, and so we’re very concerned about this. And the Israeli state, again, even with their force-feeding bill, they are showing no sign of listening to the hunger strikers and no intention to negotiate with them. And it’s very worrying for us, as families of hunger strikers.

There is a draft bill in the Knesset that would authorize the force-feeding of Palestinian prisoners on hunger strike which has already passed one vote with the final vote expected soon. The Israel Medical Association (IMA) has urged physicians not to cooperate with the government’s plans. “It goes against the DNA of the doctors to force treatment on a patient,” spokeswoman Ziva Miral said on Tuesday. “Force-feeding is torture, and we can’t have doctors participating in torture.” Multiple other Israeli medical groups have criticized the practice including Israel’s umbrella organization for national medical associations, the World Medical Association (WMA), Israel’s National Council of Bioethics and Physicians for Human Rights-Israel.

Eighteen Palestinian human rights organizations sent a letter to UN Secretary-General Ban Ki Moon urging immediate action for the hunger strikers and relatives of the strikers have appealed to Pope Francis to intervene. The International Committee of the Red Cross (ICRC) has been criticized by many Palestinians for not getting involved in the treatment of the hunger strikers especially as their health is deteriorating. “ICRC doesn’t usually call for the release of detainees in general. We monitor their condition and if we have any concerns we discuss with the authorities issues regarding their treatment,” Nadia Dibsy, the organization’s spokesperson in Jerusalem stated to the Electronic Intifada. Standard ICRC policy is to not make public statements about a government’s treatment of prisoners to maintain their non-partisan “relationship” with the authorities. They only “monitor conditions” and discuss any problems they see with the prison officials. In extreme cases like this including during past Palestinian hunger strikes, it is clear that the ICRC has little impact on the Israeli prison authorities and finally is not protecting the welfare of the prisoners or their families.

Earlier this month, the hunger strike did get worldwide attention when the security services company G4S succumbed to pressure from the BDS movement and announced it would end its contracts with Israeli prisons within three years. Shortly afterwards, the Bill and Melinda Gates Foundation, targeted by protesters worldwide for its shares in G4S, liquidated its holdings in the company.

The mass hunger strike of Palestinian administrative detainees ended on June 24. The detainees on hunger strike agreed to suspend the strike. The agreement did not include any commitment to limit the use of administrative detention. Under the agreement, the hunger-strikers will be returned to their original prisons and will not be punished or fined for taking part in the strike.  A dialogue on broader issues relating to administrative detention will continue between prisoner committee representatives and the Israeli prison service. “This is not a huge victory, but a modest step forward,” said Qadura Fares, the head of the Ramallah-based Palestinian Prisoners’ Club. “We did not succeed in mobilising the Palestinian street behind the hunger strike,” Fares said. “Unfortunately, when the Israelis went missing it became difficult. As we know, prisoners are the first target.” The approach of Ramadan next week was also likely a factor in suspending the hunger strike.

In the meantime, the draft law to allow force-feeding of prisoners continues through the Knesset and a final vote is still planned for next week.

It is clear that the Israeli prison policy of administrative detention is still in place and continues to be used during the ongoing arrest campaign in the search for the Israeli teenagers. Whether the hunger strike had continued or not, it is still vitally important to support all of the Palestinian prisoners and their families during Ramadan and beyond.

Palestine: A “state” with no real standing