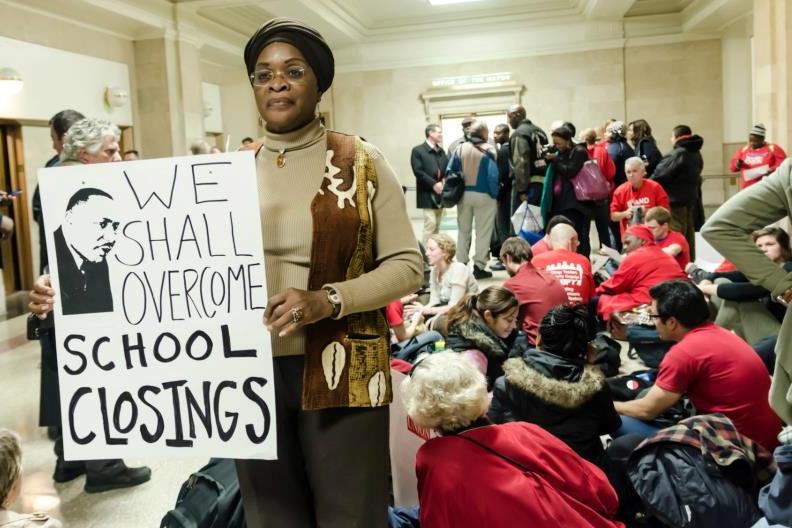 It has been one year since the mayorally elected Board of Education voted to close 50 Chicago Public Schools (CPS). The effects of this decision was analyzed by the Chicago Teachers Union (CTU) in a report called “Twelve Months Later: The Impact of School Closings in Chicago”.

According to CPS, school closures needed to be done to spend the city’s tight finances on bettering teaching and learning programs. Downsizing the number of schools would allow the city to spend the money within their tight budget more freely. But closures were met with great controversy because predominantly low-income and African-American neighborhoods were being affected.

Reducing the number of schools in the city did not better the education system. An article written for VICE NEWS analyzed the impact of school closings in the past and concluded that it causes increased violence among students and pushed students to low-performing or equally-low performing schools, among other things. Closing 50 schools displaced thousands of students. These students were relocated to schools further from their homes thus making their commutes longer and more difficult. It also put them in much larger classrooms taking away potential individual attention and caused widespread emotional trauma within the communities affected.

CPS promised schools taking in students from closed schools millions of dollars in “capital improvements and transition supports” for students coming to them. But according to a report made by the Chicago Teachers Union (CTU), the promises made to these receiving schools were “hollow in many cases and partially filled in others”.

“CPS lied, they lied back then, they lied yesterday and they’re going to continue to lie tomorrow,” said Rousemary Vega, mother of two children whose school was shut down in the closures. “Our children have not received anything but overcrowded classrooms and cuts of programs.”

Among the assorted reasons for the closure, one intention was to combat under-utilization, which meant to find solutions to empty classrooms and facilities that were not being used. But due to the school closures and students being sent in bulks to other schools, what ended up happening within this past year was overcrowding.  Parents and teachers have been pushing against excessive class sizes for years. According to the CTU report, the average class size was 24 students last year across the closed and receiving schools (schools receiving students from the school closure) and that is still the average size this past year.  This year the CTU report states that 20 of the affected schools have an increase in average class size of two or more students and six of these schools had increases of four or more.

On top of the overcrowding, receiving schools were also unreasonably under-resourced compared to other elementary schools. Students were moved to schools with libraries and computer labs, but because of a lack of funds, there were no librarians or technology teachers to help students utilize these facilities. The CTU report found that just 38 percent of the receiving schools have librarians on staff while the rest of CPS unaffected by the closures has 55 percent. The also found that only one-fifth of receiving schools have technology teachers to work the upgraded computer labs.

Now the CPS solution to overcrowding is opening more charter campuses.  The CTU report states that for every dollar that went toward alleviating overcrowding, $1.50 was spent on selective enrollment expansion. Barbara Byrd-Bennet, the head of the board of education and CEO of CPS, promised that they were not going to turn the closed schools into charters, but Vega’s children’s closed school, Lafayette Elementary, will now will reopen as a contract private school. But studies have shown that private schools and charter schools do not generally perform better than public schools.

Vega said that this past year after the closing was very difficult and that the closing had a tremendous negative impact on the city, their children, parents and teachers.

According to the CTU report, CPS directed over $80 million in additional operational dollars to help student’s transition through the chaos caused by the closing. However only 10 percent went directly to the schools.

“CPS after the closing never offered any type of counseling or affection to our children. The kids had to figure it out on their own. Kids adapt, any situation you put them in, but I as a parent and them as students, we have suffered, we dealt with it personally and internally in our homes,” Vega said.

Vega said that CPS hasn’t come out with how this past year served their interests because then they would have to acknowledge how they failed the students, teachers and parents as well as the community.

“When they close a school, its more than closing a school. They’re breaking down a community. Your neighbors become strangers, your community becomes weak,” said Vega.

Vega said the hardest part of this past year was the readjustment her children had to face at their new school. She said that they had to find their own place, start over in unfamiliar territory.

“That is so difficult for an 8 year old and a 12 year old, they have this feeling of displacement and it is just not fair,” she said.

But despite the hardships of this last year, Vega and other community members found a way to make difference. Vega started a group called Bad Ass Moms (BAM), where she pulled together moms from through out the city to come together and take on an active roll in straightening out their schools. They have put together a neighborhood school fair where 63 public schools registered and showcased their schools to the community, and they had a neighborhood school picnic for families to come together, along with other events. Vega said that the group is just a bunch of moms who value each other’s strengths and support one another.

“We are pretty much creating a web of connections throughout the city, to say we are no longer the city of neighborhoods, we are one city, one system and we got to fight as one,” Vega said, “We no longer want our teachers to be reprimanded for what we want to do our say. We are gaining strength so we can have a voice so we can not be ignored anymore.”