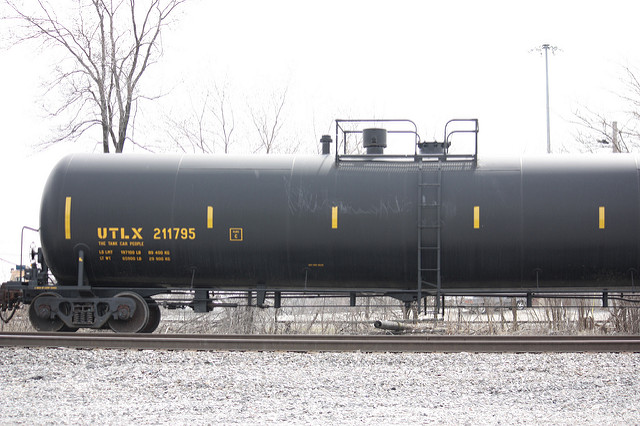 According to an article released by the Suntimes, activists concerned about “bomb trains” traveling in Pilsen and Little Village neighborhoods are demanding government officials to release the routes of such trains as well as evacuation plans in the event of an explosion.

This past Thursday, a candlelight vigil was held at the BNSF terminal at 16th Street and Western Ave. in Pilsen in order for protesters to voice their demands and concerns regarding the potential danger of “bomb trains.”

“People are living within a blast zone and they don’t even know it,” said Debra Michaud, one of the organizers of Thursday’s protest and founder of Tar Sands Free Midwest, “We are concerned that bomb trains are coming through our communities in Chicago and we want answers from public officials.”

Thursday’s protest was among other protests planned from California to New York during the “Oil by Rail Week of Action” that ran from July 6th to the 13th.

The “Oil by Rail Week of Action” is significant in the protest against “bomb trains” since the event is tied to the one-year anniversary of the July 6, 2013 explosion of a runaway freight train carrying volatile Bakken oil in Lac-Mégantic, Quebec. The explosion from the train was so detrimental it demolished more than 30 downtown building and killed 47 people.

“We saw 47 people killed in Lac-Megantic,’’ Michaud said. “A bomb train explosion in Pilsen or Little Village would be many times that.’’

Due to a boom in North Dakotas’ oil industry a record volume of Bakken crude oil is now being shipped by rail across the country. According to a report released by DNAinfo Chicago, “regulators have said the oil is more flammable and more dangerous to ship, causing explosion in places like Alabama, Virginia, and North Dakota.”

Therefore, it is no surprise that Chicago activists, like Michaud, are concerned about the dangers trains carrying Bakken oil through Chicago areas can potentially cause local residents. If “bomb trains” have already been found to cause explosions in places like Alabama, Virginia, North Dakota, and Quebec, then there is no guarantee that Chicago is safe from “bomb train” explosions.

In documents obtained by the Tribune, it is estimated that:

“As many as 40 crude oil trains, each carrying a million or more gallons of the flammable liquid involved in several recent fiery derailments, roll through the Chicago area weekly.”

This estimated number of “bomb trains” in the Chicagoland area is causing local protestors to demand that Gov. Pat Quinn and Mayor Rahm Emanuel release the route of any Illinois or Chicago “bomb trains” as well as the evacuation and emergency plans devised for their potential explosion or derailment.

According to My Fox Chicago, “earlier this year, the government ordered rail companies to provide data to communities letting them know the type and volume of dangerous materials passing through their areas.” The information is supposed to be kept confidential; however, protesters want Mayor Emanuel to keep them informed as well.

“We want these neighborhoods to be notified if they’re in the blast zone, if they’re in an evacuation zone, and are their fire departments up to the task of handling these massive fires that come off these derailments,” said Dr. Lora Chamberlain of Frack Free Illinois, “It’s just the bottom line, just safety.”