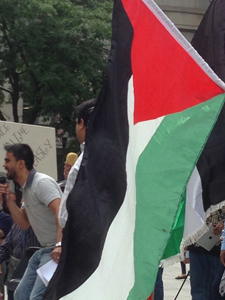 On Friday, a diverse crowd of 400 people commemorated al-Quds Day that takes place annually in multiple cities around the world. This year Chicago’s event and others across the world were focused on the assault on Gaza and the deaths of over 1,000 Palestinians – the majority civilians.

International Day of Al-Quds is an annual event commemorated on the last Friday of Ramadan. It was introduced in 1979 by Ayotallah Khomeni in Iran as a religious duty for Muslims to show solidarity with the Palestinians and oppose Israel’s occupation of the Masjid al-Aqsa and the Dome of the Rock.  It has become an international solidarity movement for human rights open to both Muslims and non-Muslims. Al-Quds Day focuses on supporting a just peace for Palestine and opposing Israel’s control of Jerusalem (al-Quds in Arabic: القـُدْس). The pro-justice and anti-Zionist demonstrations are held in many Muslim and Arab countries as well as Muslim and non-Muslim communities around the world, including the United States. This year Al-Quds Day protests across North America were sponsored by the Muslim Congress (an organization seeking to promote unity among the Muslims of North America) and were held in Atlanta, Boston, Cleveland, Dallas, Detroit, Houston, Los Angeles, New York, Orlando, Portland, Raliegh/Durham, Sacramento, Salt Lake City City, San Francisco, Seattle, St. Louis, Toronto, Vancouver, and Washington D.C.

While Chicago’s commemoration emphasized the attack on Gaza, chants still reminded the crowd of the core issues of the conflict – “Justice is our Demand, No peace on stolen land”.  Speeches were from representatives from a wide range of organizations including the local Muslim Congress, Students for Justice in Palestine (SJP) – Chicago, US Palestinian Community Network (USPCN) – Chicago, Jewish Voice for Peace (JVP) – Chicago, World Can’t Wait, and ANSWER.

Syed Haider Hasan, the local representative of the Muslim Congress, set the tone for the event. “As we speak the current death toll has crossed over 1,000 Palestinians, which include women and children. Hospitals and UN facilities are being bombed as part of this so called self defense measure. We need to break the silence and speak for those that who do not have a voice; speak up for the oppressed Palestinian people. Similar Al- Quds protests are being commemorated around the world to show solidarity with the innocent men, women and children of Palestine; and demand the end of the illegal occupation”.

Muhammad Sunkari from USPCN-Chicago emphasized the situation in Palestine is at a turning point. “We know the Palestinian people are paying an enormous cost against the Israeli’s continued barbarity, but Israel is losing. They are losing because their economy is being crippled by the boycott, divestment, and sanctions movement as millions around the world agree not to spend any money supporting the criminal state of Israel. They are losing because around the world people have realized the truth: that Israel is a criminal colonial state that does not want peace but instead wants to steal more and more land.”

Addressing President Obama and his staunch support for Israel during this conflict, Sheikh Muhammad Ali Baig, on the Board of Directors for the Muslim Congress, stated “Mr. President, it is Israel that has stopped the aid and basic medical needs of the Palestinian people. It is Israel that has reduced the people of Palestine to misery and pain.”

Lynn Pollack from JVP-Chicago reminded the crowd of the JVP sponsored occupation of the Friends of the IDF office in New York saying her group “wants the brutal bombing assault on Gaza to stop”. She continued saying “valuing Jewish life at the expense of others must end.”

Other speakers were community members like Masooma Haider, a Chicago high school student, who spoke passionately that

“you don’t need to be an Arab to stand up for Gaza, only a human being”.

The concluding message of the rally was for an end to the occupation of Al-Quds and all of Palestine. The crowd was encouraged to turn out for the mass rally and protest for Gaza sponsored by the Chicago Coalition for Justice in Palestine happening the next day in Chicago.