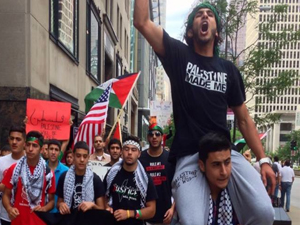 Over 1000 people from a coalition of Chicagoland Palestinians, along with members of student, faith-based, human rights and  social justice groups, turned out for a rally and march last Saturday to demand an end to collective punishment of Palestinians and demand justice for all Palestinians killed in the Israeli Army’s “Operation Brother’s Keeper”.  Chicago was joined by similar protests in more than 40 cities world-wide including Washington DC, Los Angeles, Cleveland, Seattle, Dearborn, Brooklyn, Atlanta, San Francisco, Boston, Houston, Denver, New Orleans, Philadelphia, London, Galway, Paris, Brussels, Melbourne, and Madrid. Now with the launch a few hours ago of “Operation Protective Edge” against Gaza, global protests may soon be returning to the streets.

The Chicago protest was distinguished by being initiated and led by organizers from the Students for Justice in Palestine (SJP) Chicago network (the network of organizers from SJP chapters throughout Chicagoland), and the large turnout from the Palestinian, Arab, and Muslim community. Busses from the north and southside of the city were overflowing resulting in car caravans headed to the rally at Water Tower Park. Speakers included students representing SJP Columbia, SJP DePaul/DePaul Divest, SJP Loyola/Loyola Divest and Palestinian activists and supporters from the US Palestinian Community Network (USPCN), Jews for Justice in Palestine, and American Muslims for Palestine (AMP). The speakers read and reflected on the names of the eleven Palestinians, many of them youth, who had been killed as part of a campaign of collective punishment on all Palestinians for the abduction and murder of four Israeli teenagers. Speaking in front of the Chicago Water Tower, Tarek Muhammad Khalil from AMP said

President Barack Obama has condemned the killing of the three Israeli settlers, but he sent a White House spokesperson and other members of his administration to comment on Muhammed Abu Khdeir’s murder. Notice how neither Obama nor his administration condemned the 11 other Palestinian deaths. Why? Because they were committed by forces maintained with our US tax dollars.

Other speakers talked of the current attacks on Palestinians being part of the ongoing occupation where Palestinian actions have no impact. USPCN-Chicago member, Nesreen Hasan said at the rally

No matter how many concessions the Palestinian Authority makes, Israel continues to destroy Palestinian society and repress our legitimate political aspirations.

Nadeen Darweech from SJP Loyola/Loyola Divest summed up the feelings of the majority of the protestors.

As the settlements grow, as mass arrests of Palestinians take place, and as Israel bombs Gaza, our voices get louder. Make no mistake, Palestinians do not need our tears. Palestinians need our action.

reporting that only covers the Israeli youth who have been killed, while ignoring the more than 11 Palestinians killed since the Israeli army operations began. After making their outrage at the lack of coverage for Palestinian deaths heard throughout the busy Michigan Avenue location, the thousand strong crowd ended the protest with the Janazah – offering their prayers for the dead.

The Chicago protest like those across the world had two demands – to end the collective punshiment on Palestinians for the deaths of four Israeli teenagers and to demand justice for all Palestinians killed in the Israeli Army’s operation. As Amnesty International characterized the Israeli operation,

The murder of three abducted Israeli teens deserves justice, something ill-served by the Israeli authorities’ actions overnight and their ongoing practices that amount to collective punishment of Palestinians in the West Bank, which are blatant violations of international humanitarian and human rights law.

On June 12, three Israeli teenagers from West Bank settlements, Eyal Yifrah, 19, Gilad Shaar, 16, and Naftali Fraenkel, 16, were abducted by unknown assailants while hitchhiking near Hebron in the Israeli-occupied West Bank. The Israeli government immediately blamed Hamas for the abductions even though no organization took responsibility and, as Amnesty International explained, no evidence had been presented of the government’s claims. Even before the bodies were found north of Hebron on June 30, the Israeli Army had already began heavy bombing of Gaza and wide-spread raiding of West Bank towns and villages arresting and detaining over 330 civilians, including dozens of children. Alongside the arrests, restrictions on Palestinian travel were tightened around Hebron; exit from the West Bank into Jordan was limited; crossings into Gaza virtually closed; and Palestinian prisoners in Israeli jails were punished, especially those from Hamas, for example, by cutting back family visits.

Even here in the U.S., some pro-Israel organizations like the American Jewish Committee (AJC), were understandably asking for support of a congressional “resolution calling for the immediate, unconditional release of these three teenagers being held captive in the West Bank”, but were also asserting without evidence that “reports multiply of celebrations among Palestinians across the West Bank” (email from Sam Rodin, Director of Leadership and Advocacy, AJC Chicago) suggesting that Palestinians generally were celebrating this abduction.

There was little to no mainstream media coverage of the attacks on Gaza and the West Bank, that had caused large number of Palestinian arrests, injuries, and deaths. Although Hamas was blamed by the Israeli government, the collective punishment was not limited to Gaza or Hamas activists in the West Bank.

Once the bodies of the four teenagers were found on June 30, the level of retaliatory violence escalated. Bombings of Gaza increased as well as large-scale arrests of Palestinians in the West Bank. As is often the case, home-made rockets were returned in response from Gaza without reported casulties. The apartments of the families of two men the Israeli authorities said were suspects were immediately demolished by the Israeli military in a standard tactic of demolishing houses of suspected, but not convicted Palestinians. Palestinian citizens of Israel were not exempt from this crackdown. At Umm al-Fahm, one of the largest Arab towns inside the pre-1967 lines, Palestinians who were protesting against Israeli attacks in the West Bank were violently dispersed by police, who deployed tear gas and stun grenades.

On July 2, in this atmosphere of revenge that included a mob marching through Jerusalem chanting ‘Death to Arabs!’ and stopping cars to check drivers’ ethnicity, the charred and mutilated body of 17-year old East Jerusalem resident Muhammad Abu Khdeir was found in a forest near Jerusalem. Early reports saying this was a revenge killing were correct. Shortly after video images from a security camera on the building owned by Hussein Abu Khdeir, Muhammad’s father, were published by the Electronic Intifada, the suspects were arrested. The suspects were described as young males who said they came from Beit Shemesh and Adam, West Bank settlements near Jerusalem. There appears to be little doubt that Muhammad’s death was at the hands of revenge seeking extremist settlers. This murder reflects a long history of Israeli settlers committing multiple acts of violence on Palestinians in the West Bank that is rarely reported in the mainstream press. Now with this death of Muhammad Khdeir, this extreme level of violence against Palestinians has now been exposed on the world stage.

During the Israeli Army search and bombing operation against the West Bank and Gaza, there were multiple Palestinian casualties, but little media attention to them until a video surfaced of the beating and arrest of Muhammad Khdeir’s cousin, 15 year old Tarek Abu Khdeir, by Israeli police in East Jerusalem. Tarek is a U.S. citizen from Florida whose family was on vacation. After appearing in Israeli court yesterday, Tarek was released with a 3,000 shekel ($877) bail, and placed under house arrest. A visit from the U.S. consulate and the State Department statement that said  “We are profoundly troubled by reports that [Abu Khdeir] was severely beaten while in police custody and strongly condemn any excessive use of force” was likely a result of pressure by groups such as AMP. AMP launched an emergency Twitter campaign #StandUpforTariq to demand his release which targeted Secretary of State John Kerry and President Obama reaching more than 800,000 Twitter accounts.

An important fact about Tarek’s case is that he has actually not been charged with anything. This arrest without charge, detention, and fine is a very common tactic used by the Israeli army to sweep up suspected Palestinian activists involved in non-violent protests in order to take them off the streets for long periods of time. In this case, because Tarek is an American citizen, this very undemocratic and extra-judicial version of “administrative detention” is now getting greater exposure.

Multiple groups in the U.S., including the USPCN, have campaigns underway to demand Tarek be released from house arrest and that there be an independent investigation into his assault by the Israeli police. Now that Benjamin Netanyahu has told Muhammad Khdeir’s father that the killers would be prosecuted to the fullest extent of the law, it is time for the U.S. government to demand the release of Tarek Khdeir and an independent investigation not only into his assault but also of Israel’s collective punishment of the Palestinians.

A few hours ago, Israel launched “Operation Protective Edge” against Gaza. So far it has been a series of over 90 air attacks that appear to be preparing for a ground invasion. The Israeli military indicated that 1,500 reservists have been mobilised and more could be called up. Reports on social media say nearly 10 killed and approximately 100 injured thus far. Just like “Operation Cast Lead” in 2009 and “Operation Pillar of Defense” in 2012, the media will focus on the rockets being shot from Gaza omitting the Israeli bombing and attacks on the Gazan civilian population that preceded those rockets. This time is no different. The heavy bombing of Gaza resulting in Palestinian civilian deaths and injuries started immediately after the 4 Israeli teenagers went missing and before even any evidence on who abducted and killed them. That was almost a month ago. The collective punishment of Palestinians continues.

The Israeli Army Operation Protective Edge against Gaza over six days has increased in intensity resulting in over 170 Palestinians killed, more than 1,250 have been reported injured. In an United Nations Office for the Coordination of Humanitarian Affairs report from July 13, the Palestinians killed include at least 133 civilians, of whom 36 were children and 233 women; 940 homes destroyed or severely damaged; 5,600 displaced due to damage to their homes; 16,000 additional Palestinians taking shelter in UNRWA schools; 32 fishing boats have been burned, destroyed or partially damaged . Occupied Palestinian Territory: Gaza Emergency Situation Report. Retrieved 13 July 2014. One Israeli bomb fell on a center for the disabled and another killed 18 members of the same family.

Rockets fired from Gaza have also continued in response causing some property damage in Israel, no Israeli casualties, and an estimated over 100 injuries, 1 seriously.

Protests have continued around the world as well as in Chicago. Since the protest discussed above on July 9, there have been two subsequent rallies and marches on July 9 at the Israeli Consulate and July 12 at Michigan and Congress – one of the busiest intersections in downtown Chicago. Both protests had over a thousand people, the majority from the Palestinian community. Similar to the first protest, the July 12 protesters marched to Daley Plaza – across the street from the CBS News studios – to make their case for the continuing one-sided reporting of the assault on Gaza.