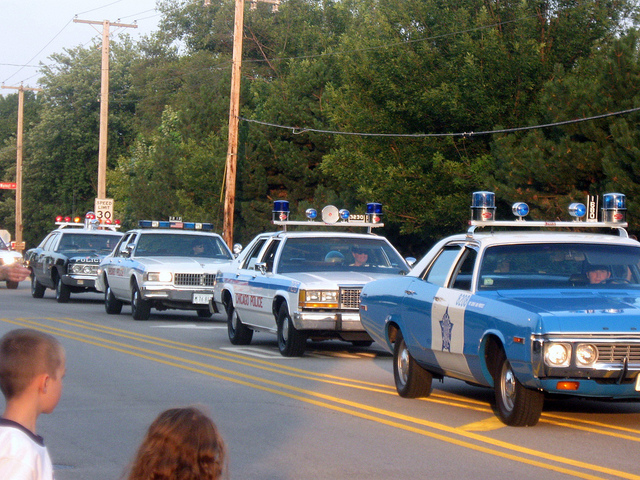 On the evening of July 27,  thousands of Muslims in Chicago received confirmation that Ramadan has ended and Eid al-Fitr has begun. Although Chicago has many Muslim communities- including but not limited to Bosnian, Palestinian, African-American, Nigerian, and hundreds of converts, one community in particular has an annual tradition of celebrating Eid al-Fitr in a public way. What began as a celebratory atmosphere of musical instruments, dancing, and henna- ended with one arrest, and dozens of police cars and patrol officers harassing community members.
Devon Avenue, known to many Chicagoans for its Indian and Pakistani businesses, has a yearly Chaand Rat- popular in Pakistan and India as an open public celebration of the end of Ramadan, 30 days of fasting from sunrise to sunset. Typically, these celebrations include open-air markets, drumming, fireworks, food, and more. This year, a group of men gathered and played various drums and tambourines on the sidewalk in front of King Sweets. Women and girls lined up at the dozens of beauty shops and stores to get their hands and arms decorated in henna, while families lined up on the streets and sidewalks to watch the fireworks.

Celebrations began around 11pm, and shortly after fireworks began going off, Chicago Police SUV’s began slowly creeping in on the community’s celebrations. The first few vehicles drove by slowly and asked people to “get off the street” on the speaker, which many quickly did. However, the crowd began growing larger and larger as more musicians came to play their drums, dancing began, and more fireworks went off. In the video below, you will see a CPD officer grabbing and talking to a Muslim man, and seconds later more fireworks go off to the West of the street.

Moments later, a young man stood on the hood of a car holding a sparkler.

He was immediately hit by a baton by one of the police officers, taken off the car hood and arrested. While this was happening, youth began chanting, “Free Free Palestine!” and ran towards the police in protest of the young man’s arrest. Below is a photo of the arrest along with audio recorded only a few feet away.

Chicago police later shut down portions of Devon Avenue. When asked why the street was closed, one officer claimed,

“it was getting really crazy over there.”

No one was reported injured, the danger was apparently Muslims having fun, setting off fireworks, and celebrating the biggest holiday of the year.

Note: All videos and audio were taken by the author at the site of the incident.