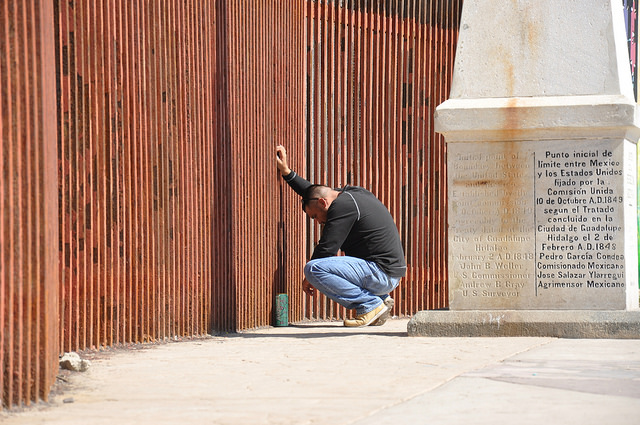 This weekend, Americans across the United States celebrated the Fourth of July and American independence. Meanwhile, in southern California, hundreds of undocumented immigrants, primarily women and children, were en route to Inland Empire border facility in Southern California. The townspeople of Murrieta, California, live in a crossing point for undocumented immigrants and have come to the realization, like many Americans, that the current immigration system has failed the United States and its southern neighbor. Throughout the weekend, demonstrators in Murrieta stood waiting for the three buses of immigrants, where they would stop the buses in order to protest the current immigration laws. Officials redirected the immigrants to a facility in San Ysidro in San Diego County and, much like immigration reform activists across the country, the citizens of Murrieta were kept waiting.

The Border Security, Economic Opportunity, and Immigration Modernization Act of 2013 (S.747) has sat in the hands of John Boehner since June of last year. Although the bill was written and sponsored by John McCain, former 2008 Republican presidential nominee from Arizona, the GOP has resisted bringing the bill to a vote in the House of Representatives. Many Republican representatives believe that the provision of a path to citizenship is unfair and grants blanket amnesty to those immigrants that came to the United States illegally. Boehner has promised, “The House is going to do its own job in developing an immigration bill”, yet no bill has been written.

Historically, the GOP has not been as opposed to citizenship for undocumented immigrants. President Ronald Reagan, the paragon of the Republican Party, passed the Immigration Reform and Control Act (IRCA) which granted amnesty and citizenship to the 3 million immigrants who had come without documentation to the United States before 1986. He famously noted that the bill, “preserve[d] the value of one of the most sacred possessions of our people: American citizenship”.

President Bill Clinton, a Democratic figurehead who became president in 1992, hoped to end the wave of immigrants coming to United States. In an autobiography written during his presidency, President Clinton stated, “We must not tolerate illegal immigration”. He signed the Operation Gatekeeper bill in 1994, which enhanced border security and doubled the size of the wall between the United States and Mexico that was built under IRCA. Operation Gatekeeper included new security provisions which made undocumented immigration more dangerous. However, the new provisions deterred very few from embarking on the journey; Operation Gatekeeper did not include further immigration reform.

The Republican Party has historically been the party of the “American Dream”, advocating the idea that anyone can succeed in the United States because of the vast economic opportunities enhanced by hard work and determination. It believes in the United States being founded by immigrants looking to give themselves a better life. Former President George W. Bush ran the promise of passing immigration reform and met with the former president of Mexico, Vincente Fox, as late as August, 2001 in order to draft a comprehensive immigration reform bill benefiting both countries. In fact, in one of his first speeches he stated, “Immigration is not a problem to be solved, it is the sign of a successful nation”.

However, September 11th, 2001 changed the priority of the Bush Administration and of the Republican Party to focus on national security, especially securing the border with Mexico. Since, it has ignored the work of its revered predecessors and alienated the immigrant population. Within the past fifteen years, the idea of immigration reform switched to a battle of fighting interlopers. Jeff Sessions, a Republican U.S. Representative from Alabama, remarked that his party cannot pass the immigration reform bill with a path to citizenship because Congress “must end lawlessness, not surrender to it”.

Instead, the Democratic Party has become the party working for the immigrant beginning with the passage of the DREAM Act and AgJobs, which enhance the opportunities for undocumented immigrants in the United States. Recognizing the growing importance of the Latino vote, the new administration has ignored the precedent set by President Clinton and reformed the platform of the party for the new millennium. President Barack Obama remarked last week,

Because of their traditionally conservative ideology, the Latino population would actually tend to side with the Republican Party on many issues, yet the Party has lost their trust because of its continued position on immigration. According to the Pew Hispanic Center, in 2012, Obama defeated Mitt Romney by 44 points amongst Latino voters and pushed him ahead in many swing states leading to his reelection victory. This year will be pivotal for immigration reform; President Obama has vowed that he will pass immigration reform either with or without Congress by the end of 2014. The Republican Party has two options: either return to its roots and honor Reagan’s legacy by passing immigration reform, or continue to resist its passage and lose the Latino vote indefinitely.

Meanwhile, the town of Murrieta looks towards a nebulous future. Candidates going into the midterm elections in November will have the opportunity to address immigration reform and argue their ideas for the continued growth of the United States. The midterm elections will hopefully resolve the crossroad that Washington has entered over the Republican Party and immigration reform. Whichever way it goes, the Murrieta and immigrants across the United States will be watching.