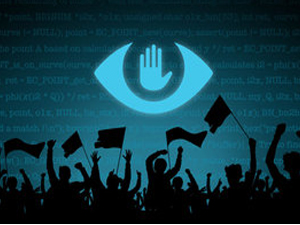 In an article published by The Intercept, Glenn Greenwald and Murtaaza Hussain describe five prominent American Muslims who had long been under surveillance by the NSA and the FBI including Nihad Awad, the Executive Director of CAIR, the largest Muslim civil rights organization in the country.  In all of the reporting of this “revelation” based upon NSA documents from Edward Snowden, it seems strange that no one  has made the obvious point that this entire scenario has happened multiple times in the past history of the FBI – most notably in the aggressive surveillance of Dr. Martin Luther King, Jr. and the entire civil rights movement. Now instead of an entire race of people fighting for equal rights being the target, it’s people who belong to one religion and are only trying to exist as American citizens.

The article describes a NSA spreadsheet that “shows 7,485 email addresses listed as monitored between 2002 and 2008”. The email addresses were not identified by name, but the authors were able to determine some of the names based on the email addresses. Other than Nihad Awad, the other targets who could be determined were:

The NSA gathered the data on these email accounts and the FBI was the “responsible agency for surveillance”. It’s important to note that these were not just individuals who happened to be on a FBI watch list like an anti-war or environmental activist. As the article describes it:

The individuals appear on an NSA spreadsheet in the Snowden archives called “FISA recap”—short for the Foreign Intelligence Surveillance Act. Under that law, the Justice Department must convince a judge with the top-secret Foreign Intelligence Surveillance Court that there is probable cause to believe that American targets are not only agents of an international terrorist organization or other foreign power, but also “are or may be” engaged in or abetting espionage, sabotage, or terrorism. The authorizations must be renewed by the court, usually every 90 days for U.S. citizens.

So presumably these individual names had to be taken in front of a judge at the Foreign Intelligence Surveillance Court with evidence that they were “not only agents of an international terrorist organization…but also ‘are or may be’ engaged in or abetting espionage, sabotage, or terrorism.” In other words, they were terrorists possibly involved in planning terrorist acts in the U.S.  There has been no indication or evidence that any of these individuals are terrorists so how was this surveillance ever approved?

Anyone who has any knowledge of the FBI’s history will recognize this scenario. A group of people who challenge the government or U.S. foreign policy are assigned a label, criminalized by a law or program, and then put under surveillance with the goal of an indictment or at least a disruption of their activism. The label has ranged from “anarchist”, “socialist”, “communist”, “black nationalist”, to today’s “terrorist”. There have been a series of laws, FBI programs, and Supreme Court decisions attached to these labels that justified the surveillance and criminalization of the group.  Laws have ranged from the Espionage Act 1917, Alien and Sedition Act 1918,  Smith Act 1940, McCarran Act 1950, COINTELPRO (Domestic Counterintelligence Program) 1960’s, COMINFIL (Communist Infiltration Program), the Patriot Act 2001, and Holder v. Humanitarian Law Project 2010. As the article points out, even the Foreign Intelligence Surveillance Act (FISA)

was enacted in 1978 in response to disclosures that J. Edgar Hoover and a long line of presidents from both parties had used U.S. intelligence agencies to spy on dissidents and political enemies. Intended to allow authorities to covertly investigate suspected spies or terrorists on U.S. soil, the surveillance is often used simply to gather intelligence, not to build a criminal case.

Even FISA and its Foreign Intelligence Surveillance Court (FISC) implemented to stop FBI abuse in investigating dissidents is being used to continue the exact same practice, i.e. gathering intelligence on American citizens who the NSA and FBI has decided are suspected terrorists. Now that group of “dissidents” appears to be Americans Muslims.

The closest comparison to the targeting of American Muslim leaders and organizations is the FBI’s campaign to discredit Dr. Martin Luther King, Jr. and the organizations leading the civil rights movement. Many people remember that the FBI targeted Dr. King, but few remember that the FBI investigation extended to the leading civil rights and black nationalist groups, all considered “black nationalist hate groups”, such as Southern Christian Leadership Conference (SCLC), Student Non-Violent Coordinating Committee (SNCC), the Revolutionary Action Movement (RAM), Congress of Racial Equality (CORE), and the Nation of Islam. (For background on this FBI campaign see “The FBI, COINTELPRO, and Martin Luther King, Jr.”  the Church Committee Report; “The Last Crusade: Martin Luther King, Jr. the FBI, and the Poor People’s Campaign” by Gerald McKnight; and “Agents of Repression” by Ward Churchill and Jim Vander Wall.)

The campaign against Martin Luther King, Jr. and the civil rights movement started as early as the 1950’s when the FBI had a 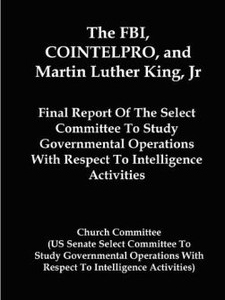 program called “Racial Matters” that required getting information on all proposed or actual activities in the “racial field”. So this would be similar to the extensive surveillance of the Muslim community after 9-11.  The extensive files begun on American Muslims likely had a more sophisticated name than “Muslim Matters” and would have referred to “counter-terrorism” in some way. But the goal is the same, i.e. gathering information on the Muslim community whether there is any evidence of criminal activity or not.

It’s well-known that the FBI targeted Martin Luther King, Jr. his entire life, continually trying to undermine him as a civil rights leader. Often this FBI vendetta is blamed on the influence of J. Edgar Hoover who had a personal dislike of Dr. King and since he had complete control over the FBI, this smear campaign was understandable. But with the full knowledge of the administrations at the time under JFK and Lyndon Johnson, the FBI conducted investigations of Dr. King and the civil rights organizations based upon a FBI manual provision called COMINFIL. This FBI program permitted investigation of non-communist organizations suspected by the FBI of having been infiltrated by the Communist Party and to determine the extent of Communist influence. There was never any evidence of Dr. King or any of the organizations being Communist or under Communist influence. The final report of the US Senate Church Committee in 1975 described the ten year effort by Hoover and the FBI to discredit Dr. King and the civil rights movement as Communist.  But that report did not stop the FBI from continuing similar surveillance operations in the future.

By now this pattern should begin to sound familiar. In the guise of fighting “terrorism”, the FBI conducts surveillance of prominent American Muslims, especially ones involved in large Muslim organizations. Faisal Gill worked as a consultant for the American Muslim Council, which was founded by activist Abdul Rahman al-Amoudi to encourage participation by American Muslims in the political process. Agha Saeed founded the American Muslim Alliance, which The New York Times described in October 2001 as “the main organization devoted to the political assimilation of the nation’s seven million Arab-Americans.” (Interesting to note that the NY Times seems unaware that there are Arab-Americans who are not Muslim and the sentence before this one reads “No fewer than five F.B.I. agents gathered around Agha Saeed after he drove from Washington and checked in for one of the first flights allowed to leave Baltimore following the Sept. 11 terrorist attacks.”). Nihad Awad, as Executive Director of CAIR, was a target who belongs to one of the main civil rights groups that challenges the profiling and discrimination that this surveillance represents.

As in the case of the civil rights movement, the very justification of surveillance – investigating potential Communists or terrorists – is enough to smear the reputations of the people you are investigating. Even if the unjustified surveillance is uncovered, you’ve already damaged the reputations of the people involved. This whole approach is the “unindicted co-conspirator list” of 300 individuals and organizations (including CAIR) used during the Holy Land Foundation prosecution that provided fodder for anti-Islam groups to attack groups like CAIR. None of the individuals or organizations on the list were ever given the opportunity to defend themselves in court. Faisal Gill knew he was probably feeding into this government suggestion of guilt by even discussing the monitoring of his emails.

Maybe people will say, ‘Hey he was being surveilled—the government must have some reason for doing it, especially if there’s a FISA warrant.’ There will be a lot of folks who will say it was justified and there’s something there. I’m sure it’ll have some sort of negative impact with clients, and who knows what else.

In their article, Glenn Greenwald and Murtaaza Hussain suggest another connection to the surveillance of the civil rights movement in the 50’s and 60’s:

But blatant prejudice against Muslim-Americans is also documented in the Snowden archive. In one 2005 document, intelligence community personnel are instructed how to properly format internal memos to justify FISA surveillance. In the place where the target’s real name would go, the memo offers a fake name as a placeholder: “Mohammed Raghead.”

There is not only a “prejudice” against Muslims in the NSA and FBI’s surveillance, but also an element of racism against Arabs. Although all Muslims are not Arabs, that association seems to continue in the minds of many in the justice community and the general society. There is little question that Hoover and the FBI’s focus on Dr. King and the civil rights movement also had a similar racist component that helped drive the relentlessness of their campaign.

Now with the advanced, mass surveillance technology at the disposal of the NSA, the FBI has almost unlimited ability to target all the communications of specific people or a very large group of people with very little effort. The other Snowden revelations have already shown that the NSA did not require much in the way of legal justifications, evidence of criminality, or court approval to gather large amounts of data on any American. How much legal justification, evidence, or approval would the FBI really have needed to convince the judge in the Foreign Intelligence Surveillance Court that these five American Muslims were terrorists potentially plotting terrorist acts?

As we hear more and more from NSA documents released by Edward Snowden, we need to continue to be outraged that our government has a very advanced surveillance program to capture personal data on individual Americans as well as on targeted groups of people like Muslims. But we should not be surprised that this unwarranted surveillance has a long history in this country and all the past outrage  to stop this unconsitutional attack on free speech and privacy has not been effective. Maybe it is time to ask why the FBI and our Justice Department seem to have a continual need to criminalize an entire group.