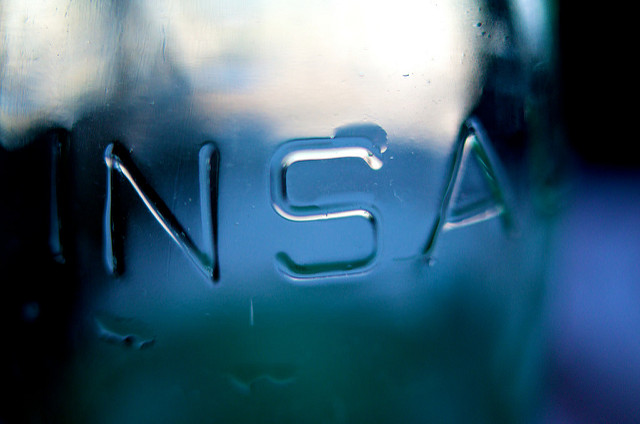 The dystopian environment that George Orwell tried to warn us about in his infamous novel, 1984 is happening right under our noses. The relatively recent capture and execution of Al-Qaeda terrorist, Osama bin Laden may have been a huge success for the United States, but what few understand is that it can harm the Constitution’s fourth amendment on the right to privacy for more than 300 million US civilians domestically.
It is publicly known that the US government used drones to track the Al-Qaeda’s movements and find Osama bin Laden.  What people do not understand is that the very drones that have targeted terrorists around the globe can also be used as a tool for police departments and other civilians across the country. Though, currently, drones are hardly used on American territory, the “Federal Aviation Administration (FAA) predicts that by 2020, 30,000 of these unmanned aerial vehicles (UAV) will be patrolling American airspace.” The graph provided by this 2010 report shows the types and number of drones that will be present within the United States by 2015 alone. Though drones are lucrative and energy efficient, citizens believe that the use of drones for American people might be breaking the fourth amendment. “The thought of government drones buzzing overhead and constantly monitoring the activities of law-abiding citizens runs contrary to the notion of what it means to live in a free society,” U.S. Senator Charles Grassley of Iowa stated at a Judiciary Committee hearing on whether drones were needed to protect civil liberties. 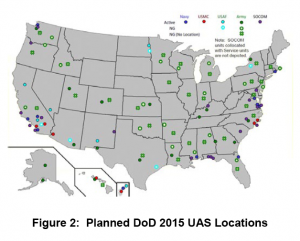 The map shows how the Department of Defense (DoD) had 146 Unmanned Aircraft Systems (UAS) based in 63 continental areas in the United States. By next year (2015), the Joint UAS Center of Excellence believes the amount of unmanned aircrafts will increase by 35%. Therefore, there will be 197 units in 105 areas across the nation. The question now is if the government will use these drones to track down specific communities that are seen as a threat in the eyes of the government. Due to the American-Islamic conflicts seen throughout the past two decades, it can be assumed that the government will keep a closer eye on the Muslim community. Representative Peter King (R-NY) publicly stated, “…99 percent of the Muslims are outstanding Americans.

The fact is, that’s where the threat is coming from.” He continued, “If you know where the threat is coming from a certain community, that’s where you have to look,” when asked about his opinion regarding the Muslim community on Chris Wallace in April 2013. If aircrafts can fly across the country unmanned and without a warrant, the government is essentially discriminating against 100 percent of the population—whether they are part of the Muslim community or not. Anytime the government believes that a specific group is a threat to national security, they will overstep their boundaries and find a way to prove that discriminating against a person (or group of people) is for the safety of millions of people. The U.S. cannot avoid the problems that come with racial profiling. The Bureau of Investigative Journalism stated that 98% of victims of drone strikes are “collateral damage”. The accuracy of drone targets is approximately 1.5-2%, so this makes more people vulnerable to drones more than ever.

“We should not be treated like criminals or terrorists while we are simply conducting our everyday lives”.

The senator felt so strongly about civilians’ right to privacy that on June 12, 2012 he introduced a bill that protected against drones surveillance in the United States. The Preserving Freedom from Unwarranted Surveillance Act of 2012 (SB 3287) served as a supplement to the rights addressed in the fourth amendment. The legislation introduces the idea of issuing warrants to have the privilege of using drones domestically in certain situations. The legislation provides clear guidelines about when drones should be implemented in a given situation. “Drones should only be used if subject to a powerful framework that regulates their use in order to avoid abuse and invasions of privacy,” Chris Calabrese, a legislative director for the American Civil Liberties Union (ACLU), said during a congressional council in November 2013.

The concept of invading someone’s right of privacy in order to provide a safe environment for the common good has been put into the grey area more than ever not only with the use of drones but with the increase of technological influence within our environment. We are living in an age where children find comfort in front of their television screen, where students are constantly posting statuses on Facebook or Twitter, and where adults have their smartphones within arms’ reach at all times. U.S. Supreme Court Chief Justice John Roberts stated, “The fact that technology now allows an individual to carry such information in his hand does not make the information any less worthy of the protection for which the Founders fought.” The National Security Agency (NSA) can have access to the information that is present on cell phones at any given time. Chief Justice Roberts wrote a 28-page document that praised the NSA’s metadata program that tracks phone details in billions of calls in order to track down possible threats to national security requiring only a warrant to do so. Apparently the only way to keep the entire country safe is to violate an individual’s right to privacy. The government is finding ways to bend the rules that are constitutionally intact. The more information we disclose with technology, the more the government knows about us—whether we choose to publicize this information or not.

The government has the ability to find information on citizens not only through the use of drones but the very technological advancements that are supposed to make lives easier. Though Chief Justice Roberts’s 28-page agenda was pushed aside by the Supreme  Court, it will only be a matter of time before the government will find a way to infringe upon civilians’ rights, whether it is through the use of drones and the reliance on technology or not. Though the government might be targeting 2% of the population, it also shows how more people are being affected than ever before. We should be aware about our surroundings and decide where the government should draw the line between safety and privacy in order to protect our civil liberties. Though “privacy comes at a cost,” like Chief Justice Roberts suggests, living in a powerful country is no exception to a fair constitutional rule that should be stagnant for generations to come.