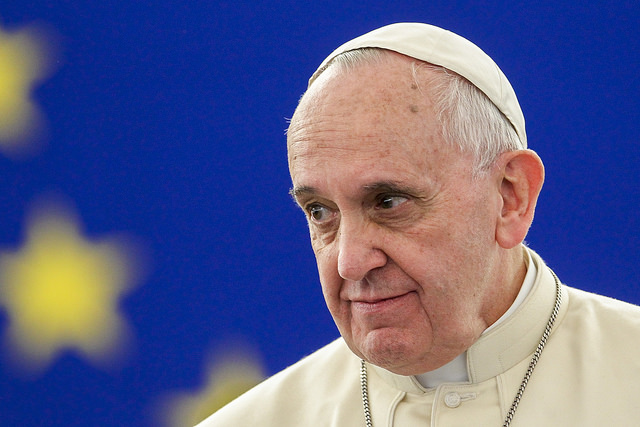 On Monday, June 30th, Pope Francis delivered a moving homily to six victims of abuse, two each from Ireland, Britain, and Germany during a private mass held at the Domus Sanctae Marthae, the residence next to St. Peter’s Basilica where he lives.

In the homily, Pope Francis described the abuse as a “crime and grave sin.” Since the abuse has long been “hidden” and “camouflaged” with unexplained complicity, Francis praised the victims for meeting with him personally, saying, their “presence here speaks of the miracle of hope, which prevails against the deepest darkness.”

According to a Vatican news release, Francis went on to ask for forgiveness, not just for those who behaved like “a sacrilegious cult,” betraying their mission to the Church while simultaneously tainting the image of God, but also those that did not respond adequately to reports of sexual abuse.

“There is no place in the Church’s ministry for those who commit these abuses,” Francis later added, “and I commit myself not to tolerate harm done to a minor by any individual, whether a cleric or not.  All bishops must carry out their pastoral ministry with the utmost care in order to help foster the protection of minors, and they will be held accountable.”

Sexual abuse scandals have haunted the Catholic Church for over two decades and became a major issue In the United States about 10 years ago. More recently they have begun to cast a shadow over local churches in Ireland, Germany, Belgium, the Netherlands, and other countries that are tarnishing Church’s image.

According to the Chicago Tribune, “the Vatican says 3,420 credible accusations of sexual abuse by priests had been referred to the Vatican in the past 10 years and 824 clerics” have since been defrocked. In addition, it was reported that “$2.5 billion in compensation” has also been paid by the Church to victims located in the United States.

Even though the Catholic Church has defrocked 824 clerics and paid $2.5 billion in compensation to victims of sexual abuse, many victims groups have criticized the Vatican for its handling of the major issue.

In a statement sent to NBC News, Mary Caplan, the leader of the Survivors Network of those Abused by Priests (SNAP), provides a critique of the Vatican’s actions when she says, “Over the past 2000 years, two popes have met with about two dozen clergy sex abuse victims. Very little has changed.”

“A dozen popes could meet with 100 victims, and very little will change. These meetings are public relations coups for the Vatican and a distracting placebo for others.” Caplan went on to say.

In line with SNAP’s critique of the Catholic Church, other victims groups have begun to criticize the pope for waiting over 16 months after his election to hold a meeting, calling the move a publicity stunt.

In addition to calling Monday’s meeting a publicity stunt, advocates for abuse victims have also argued that the Vatican has done too little to generate a strong, accountable system to prevent abuse and prevent bishops from protecting abusive priests by reallocating them to other dioceses or by neglecting to report accusations to the civil authorities.

“With sexual violence and cover-ups, Catholic officials are obsessively fixed on policies and protocols,” SNAP later said in another statement. “But they absolutely ignore the one step that matters: action.”

While Pope Francis and the Vatican have been facing scrutiny for their lack of action against sexual abuse, Vatican spokesman Father Federico Lombardi defended them, saying critics don’t understand the pope’s “positive intentions.”

“If you look at the time the pope dedicated to them, and their emotional reaction, it’s clear this was not a public relations event. It was a profound encounter between a pastor and a person he loves and tries to understand deeply,” Lombardi said. “I witnessed the profound gratitude they expressed to the Holy Father for the chance he gave them to speak about their experience.”

Since Francis was elected pope last year, he has pledged that the Vatican, suspected of not doing enough to bring abusers to justice, will introduce a “zero-tolerance” policy against sexual nature crimes against minors.

Near the end of 2013, the pope overhauled Vatican law in order to broaden the definition on child abuse to include sexual acts with children, child prostitution, and child pornography, making them punishable by up to 12 years in prison.

Shortly after, Francis created a panel of experts to advise him on strategies to tackle the widespread problem. According to NBC, “the panel consist of the Irish abuse victim Marie Collins, and U.S. Cardinal Sean P. O’Malley of Boston, who has a lengthy track record of cleaning up dioceses shattered by child sex abuse.”

Francis reiterated his pledge to implement a new “zero-tolerance” policy against sexual abuse on Monday when he asked for support:

While action did not immediately follow past reports of abuse, the actions being taken by the current pontiff show that he is serious in achieving his pledge to create a policy that holds offenders accountable for their actions.

Therefore, to the victim groups criticizing the Vatican as well as the pope, it is important to realize that measures are being taken to prevent future acts of cleric abuse. It is also necessary to understand that change does not occur overnight and criticizing the efforts the Catholic Church is currently taking to ensue necessary changes also does not help resolve the issue.