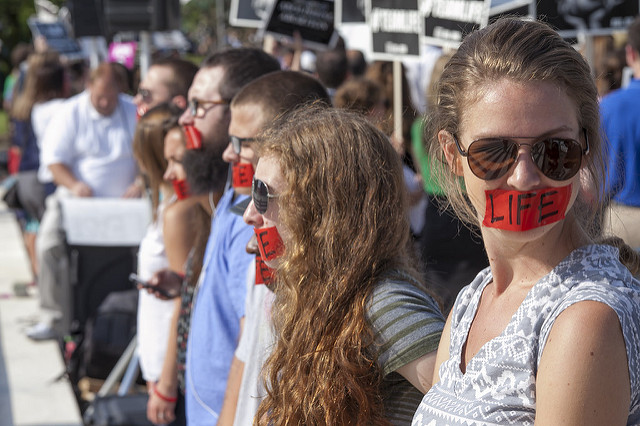 The recent case of Burwell v. Hobby Lobby, has become a highly politicized case which will have a major impact on both the liberal and conservative sides of Congress. In two lengthy opinions, the majority opinion of Justice Alito and the minority opinion of Justice Ginsburg, the court focused on two different interpretations of the Religious Freedom Restoration Act (RFRA.) But what is this piece of legislation and in what context did it come into existence?

In evaluating how two strong legal minds can interpret the RFRA, it is important to consider how the act was formed, and the circumstances in which it was passed into law.

The Religious Freedom Restoration Act was passed in response to a Supreme Court ruling which gave the Federal Government the power to enforce federal law without an exemption for individuals making specific religious choices which were in conflict with federal mandates. The Congress sought to establish a test in which religious exemptions could apply, thus protecting First Amendment guarantees in the face of federal legislation. The Religious Freedom Restoration Act was passed with minor debate, passing the Senate with a vote of 97-3, and the House with a voice vote.

The Religious Freedom Restoration Act also provides a two part test to evaluate if a federal law could burden the application of a person’s religious beliefs. The first factor considers if the law is “in furtherance of a compelling governmental interest.” And the second factor evaluates, if the way the government’s law applies is the “least restrictive means of furthering that compelling governmental interest.”  The Act concludes with a reference to the ability for person’s whose religious exercises have been burdened by the federal government can apply for a degree of relief. While this Act is a federal law, many of the states have passed identical legislation in applying to state laws.

In Burwell v. Hobby Lobby, both Justice Ginsburg and Justice Alito arrive at different conclusions as to the scope that Congress wanted the Religious Freedom Restoration Act to apply.

Justice Alito used a long standing body of law, which for legal purposes, applied the concept of the “person” protected by the Religious Freedom Restoration Act, as applying in certain circumstances to companies and corporations. Alito went on to explain that, “The purpose of extending rights to corporations is protect the rights of people associated with the corporation including shareholders, officers, and employee’s . . . Protecting the free exercise rights of closely held corporations thus protects the religious liberty of the humans who own and control them.”

In contrast to Alito, Justice Ginsburg reasoned the statutory construction of the Religious Freedom Restoration Act was limited, and did not apply to businesses or corporations. Justice Ginsburg reasoned, the Religious Freedom Restoration Act did not apply to private corporations, and further that it is not possible for an individual’s company’s private belief, or organizational creed, to distinguish between what is a compelling religious interest and what an individual’s interest is in protecting their First Amendment rights. In explaining her reasoning, Justice Ginsburg wrote, “As Chief Justice Marshall observed nearly two centuries ago, a corporation is “an artificial being, invisible, intangible, and only existing only in contemplation of law.””

Both the White House, women’s health groups, and Justice Ginsburg have all voiced concern over the implications of this decision by the majority. Specifically the repercussions, or “untoward effects” of the law regarding the ability for private companies to raise a legal defense to avoid federal law based on a religious exemption under the Religious Freedom Restoration Act.

Both interpretations of the argument have legal merit. However, the court’s initial ruling in Hobby Lobby will probably be revisited in future Supreme Court sessions, as the Court continues to sort out the various requirements and applications of the law. Future legal opinions could already be forming as both Justices Breyer and Kagan have expressed a desire to revisit the rights of for-profit-companies.

Women in hijab: Uncovering discrimination in the workplace

Women in hijab: Uncovering discrimination in the workplace