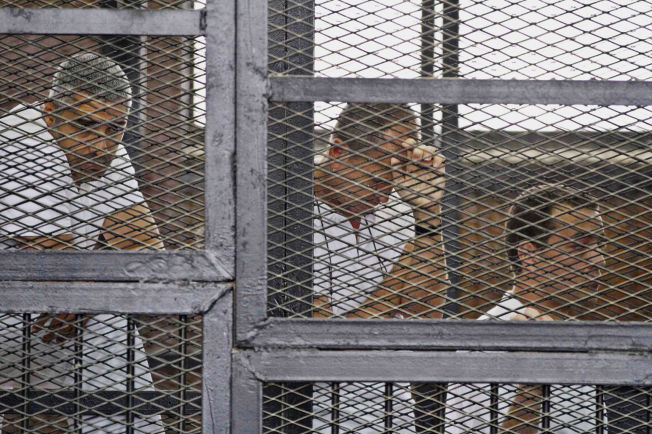 The recent arrests in Egypt of three Al-Jazeera journalists Mohamed Fahmy, Peter Greste and Baher Mohamed follow a decade long trend of decline in press freedom as reported by Freedom House.  Egypt’s score for press restriction rose from 62 to 68 from 2003 to 2013. The crackdown on press freedom has paralleled a larger security operation to quell dissent where hundreds of Egyptians have disappeared and approximately 40 thousand have been arrested. These stories are often untold with Egyptian journalists either parroting the government’s national security narrative or facing consequences like arrest.

On December 29, 2013, the three journalists were arrested and charged with spreading false news. The Egyptian Judiciary claimed they harmed national security and aided the Muslim Brotherhood (a designated terrorist organization by the Egyptian government) to manipulate footage to tarnish Egypt’s image. Peter Grest commented;

“We had been doing exactly as any responsible, professional journalist would – recording and trying to make sense of the unfolding events with all the accuracy, fairness and balance that our imperfect trade demands. Most of the time, it is not a difficult path to walk. But when the Egyptian government declared the Muslim Brotherhood to be a “terrorist organisation”, it knocked the middle ground out of the discourse. When the other side, political or otherwise, is a “terrorist”, there is no neutral way.”

On January 29, 2014, Egypt’s chief prosecutor referred 20 people, nine of them Al Jazeera staff, to trial, including Fahmy, Greste and Mohamed. Eight were in custody, while the remaining 12 were being tried in absentia. On June 23, 2014, Canadian-Egyptian Fahmy and Australian  Greste were sentenced to seven years in prison, while their Egyptian colleague, Mohamed, was sentenced to an additional three years for the possession of ammunition.

This case brings up two points on the current state in Egypt; the use of the journalists as part of a political show trial and the trial’s significance as to how the government will operate as Egypt enters a new era.  As freedom of the press reached a decade low at 14 percent in 2013 around the world and as hopes raised by the Arab Spring are dashed, the future of journalism, as a whole, seems obscure.  As BBC Correspondent Alan Johnston said in a talk with Amnesty International;

“The campaign to help release the Al Jazeera three has raised awareness but also highlighted the wider issue of journalists being incarcerated for doing their jobs.”

When asked about his opinion on the verdict of the trial, Greste said,

“The verdict confirms that our trial was never simply about the charges against us. It has been an attempt to use the court to intimidate and silence critical voices in the media. That is why I know that our freedom, and more importantly the freedom of Egypt’s press will never come without noisy, sustained pressure from individuals, human rights groups, governments and anyone who understand the fundamental importance of a free press to Egypt’s fledgling democracy.”