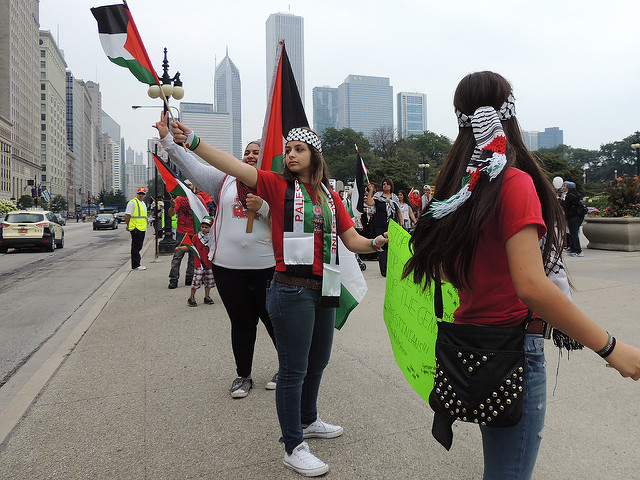 On Sunday, July 20th, thousands of Chicagoans gathered downtown to protest recent events related to the Palestinian-Israeli conflict. While there is no exact figure on the number of attendees, estimates run as conservatively as 2,000 to as enormous as 10,000 and is arguably the largest Palestinian protest in Chicago to date. Marchers convened along Upper Wacker Drive for the start of the protest. After weaving through downtown, they concluded their march at the intersection of Madison and Canal near Chicago’s Israeli consulate. Throughout the march, chants and songs could be heard resonating within the vicinity of downtown. While there were numerous organizations, individuals, and voices, they all marched for the same cause—an end to the violence in Palestine.

As with most protests, the march grew organically, building steam as the event neared. With the help from Chicagoland pro-Palestine and Islamic organizations, the event’s message became viral on social networks and passed by the word of mouth. The march started roughly around 3p.m., but commotion and rallying started as early as 1p.m. downtown. Palestinian supporters waved Palestinian flags out of cars and on the back of motorcycles as they raced to the protest. Local mosques organized buses to bring supporters from the surrounding Chicagoland area. Outside of the Tribune Tower, protestors laid silently with their backs on the ground as the names of roughly 200 Palestinian victims that have died from recent Israeli bombings were read aloud. As the clock neared 3p.m., the ambiance in the air filled with a greater sense of purpose and motivation.

“Free, free, Palestine” and “From the river to the sea, Palestine will be free” echoed from the voices of thousands. Regardless of the number, Chicagoans came together for justice and to stand against the violence committed in the Palestinian-Israeli conflict. Particular attention was addressed to the killing of Palestinian children in Gaza and the West Bank. Pictures of bloodied Palestinian children were taped to the backs of protestors and to signs, acting as a vivid reminder to all those who saw them, the human cost of violence.

Aya Nimer, a senior at the University of Chicago Lab School, attended the march after receiving a Facebook invite for the event.

“The march felt very upbeat because you were enveloped by dancing and the beat of drums” said Nimer upon her reflection of the march. Nimer also commented on the attendees of the march,

“There was also a lot of diversity represented by the marchers. It made you realize this is not an Arab or nationalist issue, but a humanist concern.”

Individuals from copious religious, human rights, and activist groups united on Sunday for a cause they all believe in. The tragedies occurring in Palestine are not purely an Arab and Muslim issue, but an issue facing humanity. Sunday is just an example of how active citizenship can spark change and hopefully it will contribute to a brighter future.