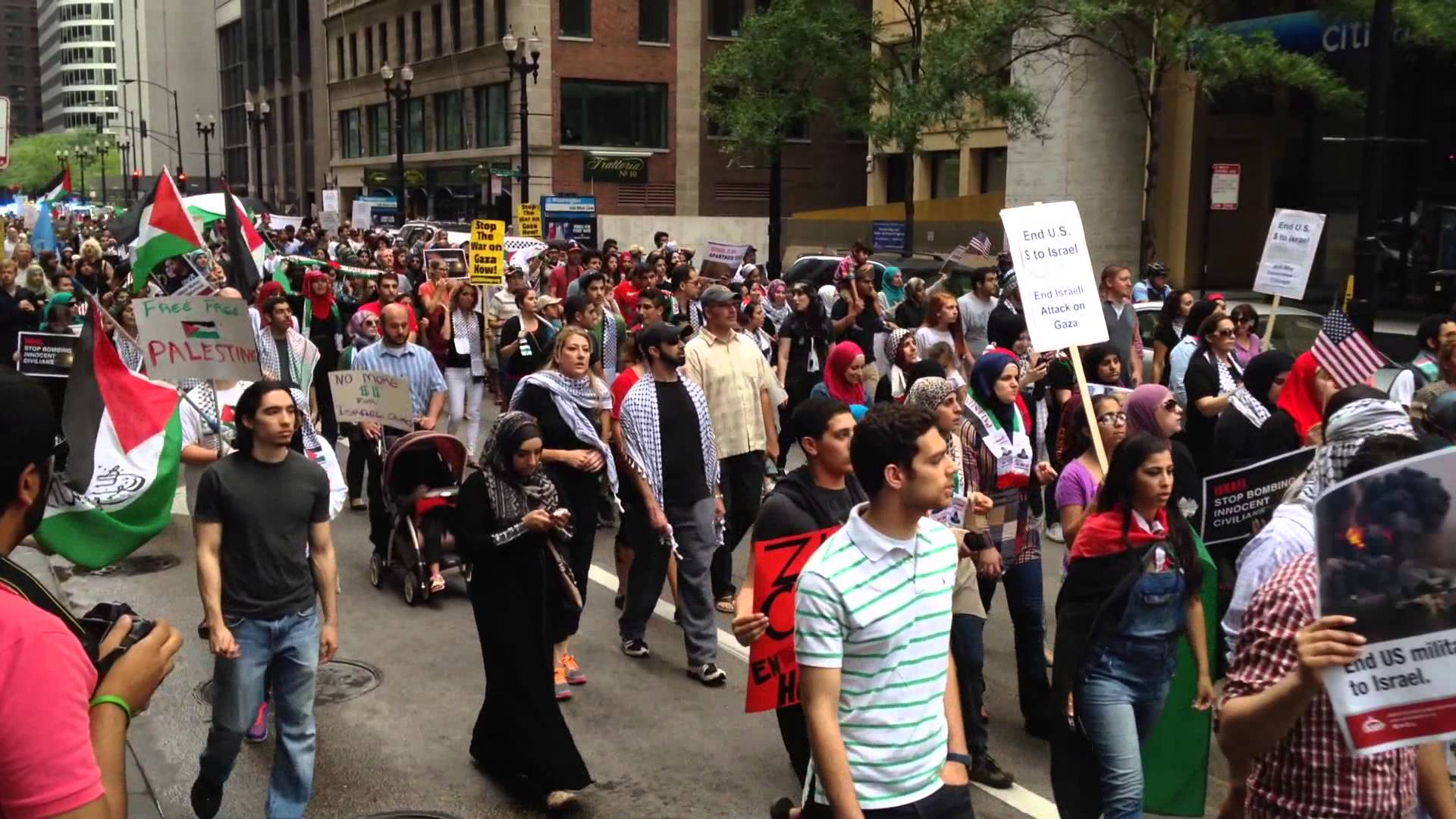 Last Sunday, an estimated 8,000 people protested in Chicago against the media silence on the over 2,000 deaths in Gaza during the current conflict. Proving the point, the protest was barely covered by the local media.

With a ceasefire ending the day before and fighting resumed, the Chicago protestors had reason to believe that the large number of civilian deaths in Gaza would be still newsworthy.  But surveying the local Chicago news media, only one TV news channel, ABC Channel 7, and one Chicago newspaper, the Sun-Times, even bothered to report on the protest.

The main themes of the march and rally were the condemnation of Israel’s killing of civilians and bombing of hospitals, schools, and mosques; and a demand for an end to the seven year siege of Gaza. The protesters stressed the magnitude of the assault on Gaza reflected in the latest statistics published by the Palestinian Centre for Human Rights.

As Hatem Abudayyeh, one representative of the Chicago Coalition for Justice in Palestine, stated “The Palestinians in Gaza are living in an open air prison. So what the Palestinians are saying is that you must end the siege and killing of the Palestinian people, you must end the occupation.” From the meager coverage in the local media, those messages repeated by multiple speakers were ignored. In the ABC News Channel 7 report, the message was reduced to “They criticized the United States and Israel”.  The Chicago Sun-Times ran a piece that focused vaguely on only one of the messages of the march –  “Palestinian flags fluttered through the streets of Chicago on Sunday as protesters descended on the Loop to demand an end to U.S. support for Israel.”

The other distinguishing characteristic of this protest compared to previous marches for Gaza over the last month was the emphasis on world support for the Palestinians. This included marchers carrying flags from over 15 countries including Brazil, Venezuela, Bolivia, Ireland, Spain, Iran, Iraq, Syria, Libya, and South Africa. There were multiple speakers who represented people from countries in solidarity with the Palestinians. Jorge Mujica, a long time Mexican labor activist who is running for alderman in Chicago this year, stressed that “I’m not here because I am running for alderman, but because I have always been here for the Palestinian community.” He went on to stress Latin America’s strong support for the Palestinian people. Zanoni Cuesta, an Ecuadoran activist in Chicago, spoke about the support of the people of Ecuador for Palestine and President Correa pulling the ambassador to Israel because of the attack on Gaza. Maria Pizarro, a Chilean activist in Chicago, who was exiled from her country after the coup against Allende in 1973, also spoke of the broad support the Palestinians have across Chile and Chilean government suspending its existing free trade agreements with Israel.

These speakers at the rally represented the broad support the Palestinian position has in other countries, but if you follow the local media in Chicago (and often the national media) you would believe the U.S. government’s position of supporting Israel diplomatically and financially is the dominant world view. In addition, if you were actually aware that thousands of Chicagoans continue to march in support of the Palestinians in Gaza, you would still get no answers from the local media about why they were even protesting.