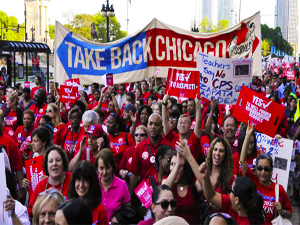 On Monday, August 4, United Working Families (UWF), a partnership between the Chicago Teachers Union and a coalition of a dozen community groups, announced its official launch.

The new progressive group will work towards fighting for working families up against corporatist leadership influencing public policy and election throughout the city, reports eNews Park Forest.

“This organization collectively will represent well over 100,000-plus members in a diverse range of communities in Chicago” executive director Kristen Crowell said of the group.

“I think these are issues right now that are central to what our community is paying attention to,” Crowell later said. “I think that it’s very important that United Working Families is a strong, independent voice for our residents.”

According to the Wall Street Journal:

“The coalition’s goal is to hold Chicago Mayor Rahm Emanuel’s feet to the fire as the first-term Democrat campaigns for re-election and renegotiates labor agreements. The most problematic is the Chicago Teachers Union contract, which expires next June. After their last contract expired in 2012, teachers staged a seven-day strike that resulted in Mr. Emanuel conceding to most of the union’s demands. The strike undercut his reform agenda and support among minorities.”

United Working Families will work to transform the current political landscape through grassroots mobilization, candidate recruitment, and building ward-level activist teams throughout the city with a goal of leveraging the “power of the people” to fight back against corporate dominance and top down leadership at City Hall and in Springfield.

While the United Working Families coalition has over a dozen community groups backing its fight against corporatist leadership influencing Chicago’s government, there are some individuals that are skeptical the group will help the community.

Chris Edwards, director of tax policy studies at the Cato Institute, recently told the Daily Caller News Foundation that groups like UWF “serve few, if any positive ends these days. Economically, they hurt workers, families, and industry by scaring away entrepreneurs and deterring investment.”

“They harm individual freedom by squelching their freedom of association of workers,” Edwards added. “Monopoly unions are also unfair to consumers and taxpayers.”

While only time will tell if United Working Families will accomplish its goals and create a better Chicago, let’s hope for the best rather than the worst.