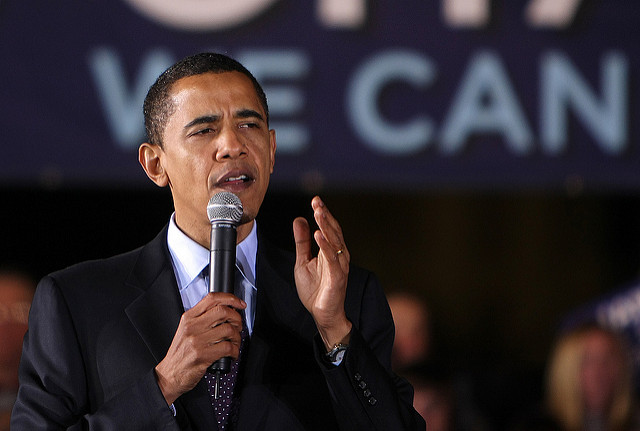 Yesterday the nation looked to it’s leader for guidance and resolution in the midst of tragedy. Pres. Obama took the podium fifteen minutes after his slated speech time, which sparked the #whereisobama hashtag. In a way we are still asking this.

He began and ended his remarks with brief statements on Iraq. Much of his speech, however, was devoted to the crisis in Ferguson. He acutely avoided taking sides and dodged talking points effectively.

Honestly, he sounded like my dad when my mom is mad at me, but he doesn’t care- a bored sternness. He stuttered with “umm”’s and “uh”’s and reflected on such values as justice, transparency, and opportunity for black youth (citing his My Brother’s Keeper Initiative) . He expressed interest in creating bipartisan support for investigating the militarization of local police since 9/11 but refused to give concrete opinions on Governor Nixon’s move to deploy the state level National Guard in Ferguson. He, in fact, informed us that he ensured the Governor of Missouri that were the Federal National Guard deployed they would be instructed to have operate in a “limited and appropriate way.”

The fact of the matter is, however, that the President’s less than harsh words about the ongoing police brutality and militarization in Ferguson will avail nothing to the statewide National Guard deployment, or their hyper-militarized local affiliates. Moreover, there is no apparent impetus for the police to scale back their aggression or militarizing effort. The perceived instability of Ferguson is, no doubt, going to be cited for an increased budget request by Ferguson PD, and potentially even by Missouri’s National Guard. Not only is this economic, but it is clearly racial.

The white police are further destabilizing and conflating the tension with guns, tear gas, and violence towards an unarmed, impoverished, and righteously infuriated black community.

There is another possibility, however, to the President’s reticent remarks yesterday. He is aware of the political implications of being a black man in this nation.  As he said before,

“There are very few African-American men in this country who haven’t had the experience of being followed when they were shopping in a department store. That includes me.”

And in his mumbled words there is an existential crisis- how can he stand up for his nation, while also policing it?

Like I said, a stern speech from a father who doesn’t really care…

President Obama is torn between being the lead guide and head cop. The hyper-militarization of the police is something that has only increased since his Presidency. The NDAA amendment has enabled local law enforcement unprecedented use of force. Not to mention Edward Snowden’s documents which has revealed the President’s mandate to spy on his citizenry.

We need resolution, and we all know the verdict. Darren Wilson is guilty of killing an unarmed black youth. Race plays a part of this conversation, absolutely. Poverty, of course, and the militarization of the police obviously. The president wants us to take a step back, take a deep breathe, and re-assess whether or not this single life is worth the trouble being reported. It is.

The President is at a fork in the road. He is torn between ensuring the police state he helped foster stays the course, while simultaneously mourning with a grieving and confused nation. He certainly understands the critical condition of race relations in America, as he demonstrated during the Trayvon Martin disaster, yet he did not confidently address how the racial divide persists, nor is he providing any viable avenue for understanding and conversation.

We need a 2008 Barack Obama that is willing to stand up to suburban police bullies and their white washed image of a moral America. We need a President that will not bow to mainstream media’s exploitative gibberish over-reporting of this crisis. Barack Obama stood with the people during the Trayvon Martin tragedy, he must do more to stand with the people during the Michael Brown tragedy. If he wants to keep his proverbial son safe send the Federal National Guard to Ferguson, and arrest the entire police department there (don’t forget mayor, and governor as well)…