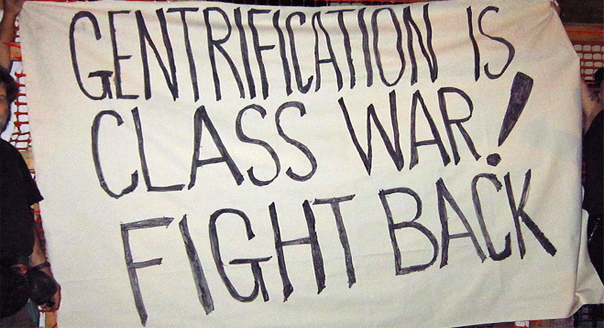 Riot Fest is a punk music festival celebrating its 10th anniversary this year spanning from Friday, September 12th to Sunday, September 14th. At its beginning the festival was located at several indoor venues around Chicago. Since this time it has expanded to multiple cities, although Chicago remains the biggest location.

In 2012 Riot Fest moved outdoors to Humboldt Park and expanded to include multiple music stages, food and beer vendors, and carnival rides.

Due to Riot Fest’s punk and DIY roots, often the biggest complaint about the festival’s expansion to

Humboldt Park is that it “sold out.” However, coming from a subculture that prides itself on having Leftist ideologies (for the most part), it is surprising that the main complaint is concerning the superficial punk credibility of the festival.

What should be the most glaring problem about Riot Fest is how the festival directly contributes to gentrification and systemic racism through colonization.

Historically, Humboldt Park has been predominantly composed of people of color.It has a strong Puerto Rican community as well as a high population of Mexican and African American residents.

However, the community has seen a change in racial composition in recent years that is no coincidence.

This is evidence of gentrification that has had serious effects on the housing market of the community. Since 2013 alone the median price of houses has risen 62% driving foreclosures up around 567% within the same period.

Rent prices have also risen 27% (compared to a 17% rise in income) in the last ten years as well. Earlier this year Redfin even included Humboldt Park in its national top ten list of up-and-coming neighborhoods due to this increase in housing costs.

Residents have been holding protests and workshops discussing housing issues due to gentrification and its effect on the community since the mid-2000s.

Extensive studies about the effects of gentrification on the Humboldt Park community have also been conducted including one commissioned by the Chicago Commission on Human Relations in 2006. The study detailed changing demographics and attitudes concerning gentrification from various long-term residents. Not only are residents afraid of being displaced from their homes but the racial tension between Hispanics and non-Hispanics is palpable.

It is undeniable that Riot Fest has been a part of the gentrification of Humboldt Park. It is a reflection of white colonization in real time.

When the festival was first proposed to take place at Humboldt Park, residents of the community were mostly opposed. Clearly these concerns were ignored as the festival continues.

The organizer of Riot Fest even said this year that

“People thought we were crazy for choosing Humboldt Park in Chicago, but we knew we were right. Fast-forward three-years later, Humboldt is fast becoming its own economic engine … and we are proud to be a part of that rehabilitation”.

The festival forced its way into Humboldt Park and now claims that the community was broken and the festival’s presence has been a type of “rehabilitation”. This ideology is teeming with racist colonialism. It suggests that the occupation of Hispanic and black neighborhoods by white people is for their own good because there was and is something wrong with them.

This quotation also reflects how white people associate communities composed predominantly of people of color as unsafe. Concert goers thought having Riot Fest in Humboldt Park was “crazy” due to their

perception of Humboldt Park as unsafe. The safety of the area is frequently questioned by concert-goers unfamiliar with the area or operating on stereotypes.

Gentrification, [Alejandro] Molina [secretary of the Board of Directors at the Puerto Rican Cultural Center] asserts, is an act of violence, pushing out lower-income minorities in favor of more affluent white professionals without roots in the community. He has seen that pattern with older residents being persuaded to sell their homes.

In true imperialist fashion, Riot Fest has been physically expanding in size since 2012 as well. This year it will cover 162 acres compared to the last two years which covered 38 acres. The festival is trying to create something akin to a white gated community on land they have no right to be using in the first place.

This exclusion includes attempts to minimize contact with actual residents of the community. The festival does not allow re-entry or outside food so concert-goers have to buy food inside the festival grounds (many vendors are out of state) instead of buying from local restaurants and businesses.

Finally, in an ironic twist all profit from the carnival games at Riot Fest goes towards the Chicago Coalition for the Homeless. While it is good, and arguably a moral obligation for the festival to give back to the community this choice of charity is somewhat hypocritical.

Riot Fest has contributed to the gentrification of the community causing residents to lose their homes and at the same time donates money to charities dedicated to fighting homelessness.

Riot Fest is not only part of a long-term problem, but its presence in the community for three days causes immediate problems for residents as well.

Last year the festival attracted about 35,000 people per day to put it in perspective. The issues included cell phone service, transportation, and damage to the park.

I attended the festival last year so I can attest to these issues. I did not get cell phone service at all inside the festival grounds and intermittent service near the grounds. This was a problem for all those I spoke with in attendance as well.

On Riot Fest forums this topic comes up frequently as an issue to be aware of for this year’s festival. Many concert-goers even claim that it was their biggest complaint about the festival weekend itself. The second major problem was transportation to and from the park which I found more distressing.

I used public transportation to the festival and jammed myself into a packed bus that I was lucky to get on in the first place. To clarify, I realize I am integral to the problem though at that time I was ignorant of the more nuanced political issues that Riot Fest is now apart of.

People who drove went to extreme lengths to find parking including paying residents to park in their driveways.

Trying to get back from the festival was even worse. Buses were not a good option as extremely long lines formed meaning waiting for multiple buses to come before anyone could board. Cabs were completely full.

I finally tried to rent Divvy bikes, but were told by a Divvy employee that we couldn’t because the computer system relies on cell phone towers which were already overloaded. I ended up walking halfway from Humboldt Park to Lincoln Park (about 45 minutes) before we found a cab. Between the lack of cell phone service and transportation, the whole ordeal was pretty inconvenient.

However, the inconvenience for Humboldt Park residents is of bigger concern.

Not having cell phone service is not only inconvenient but causes real safety issues. Furthermore, residents talked about not being able to park their cars on their own street and resorting to paying for parking.

This also posed a problem for residents who had to work and needed to drive to get there.

The public transportation jam is also problematic because 23.1% of Humboldt Park residents rely on the CTA for commuting and general travel.

Even after the festival ends for the weekend the damage to the park is still a huge issue. Last year the restoration for the park cost $54,300. Riot Fest does pay for the cleanup, but it is still problematic for the festival to take over a community’s park, destroy it, and then act as if this is acceptable because they “fix” the damage every year.

BP was not praised for cleaning up oil spills, and neither should Riot Fest for cleaning their mess, and lightly restoring broken land, that could have been easily avoided with a socially aware venue choice.

There is no denying that Riot Fest offers a great musical lineup featuring extremely popular bands and has a reputation for getting bands to reunite for the festival. Musically, the festival offers opportunities to see bands that people would otherwise not have a chance to see.

However, there are serious moral issues to consider due to its location in Humboldt Park. Riot Fest’s racially divided gentrification of a neighborhood stands in direct contrast to racial equality, civil rights, and housing rights.

Hopefully concert-goers will keep this in mind when they attend Riot Fest this weekend and are as courteous as possible to the residents of the Humboldt Park community.

This article has received substantial and warranted criticism for comparing gentrification to ethnic cleansing. That portion of the text was removed at the author’s request as it was something the editor added in prior to publishing it, and the author felt it detracted from the perspective as a whole. However, it should be mentioned that gentrification and ethnic cleansing are often used interchangeably by many scholars on the topic of urban renewal, as ethnic cleansing can simply be defined as “the mass expulsion or killing of members of an unwanted ethnic or religious group in a society.” Minus the act of killing and ethnic cleansing does apply to the cases of many neighborhoods in Chicago.

The Gentrification of Chicago’s Public Housing