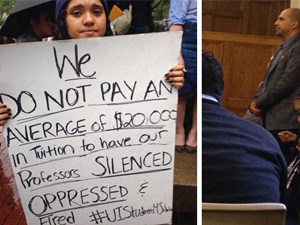 In the controversial firing of Professor Steven Salaita by the University of Illinois, the behavior of the Chancellor Phyllis Wise, Board of Trustees Chair Chris Kennedy, and others have been the subject of numerous reports in the media. Escaping notice through all of this is a member of the Board who has been involved in cases that have violated the rights of Palestinian-Americans – former U.S. Attorney, Patrick Fitzgerald.

On September 16, the University of Illinois Board of Trustees voted 8-1 to not appoint Steven Salaita as a tenured professor in American Indian studies on the Urbana campus. The board’s decision agreed with the opinions of University President Bob Easter and Chancellor Phyllis Wise. Easter stated that he made his decision based on controversial comments Salaita made on Twitter concerning the Israel-Palestine conflict. At that same meeting, Trustee Patrick Fitzgerald was quoted in an article in the UIC News, the administration newspaper at the Chicago campus of the university, explaining his vote against Salaita that “the board’s first responsibility is to ensure a safe and nurturing environment for students”.

Joe Iosbaker, an anti-war and Palestine solidarity activist and 25 year employee at UIC, wrote a letter to the editor in response. UIC News wouldn’t publish the letter, and didn’t respond to Iosbaker’s email or phone message inquiries to explain why. Iosbaker is one of the 23 anti-war and international solidarity activists targeted by an investigation launched by Fitzgerald. Iosbaker requested that the Chicago Monitor publish his letter.

Iosbaker’s letter to the editor is reproduced below.

In your September 16 story, “Board of Trustees votes against Salaita appointment,” you refer to comments made by trustee Patrick Fitzgerald:

Trustee Patrick J. Fitzgerald said the board’s first responsibility is to ensure a safe and nurturing environment for students. He said some of Salaita’s statements had the same hurtful intent as homophobic or racist comments.

Safe and nurturing environment for students? This from a former U.S. Attorney who has played a leading role in the U.S. government’s undermining of civil liberties during the so called “War on Terror.”

Fitzgerald sent 25 FBI agents to raid my home in September 2010, in a witch hunt meant to criminalize dissent. Fitzgerald also sent the FBI to four other homes of anti-war activists, who, like myself, had children. Where was his concern for our kids? Several of the children were four or five years old, and had armed FBI agents, some with battering rams, entering their homes at dawn, and going through every square inch looking for evidence that we were providing “material support” to foreign terrorist organizations.

When none of us would testify to his secretive grand jury, Fitzgerald then sent the FBI to the homes of nine other activists, mostly young Palestinians, including students at UIC and DePaul. Sarah Smith, a recent DePaul graduate, was subpoenaed and in a statement at the time, said,

“I took a trip last summer to Israel and Palestine. … I went with two Palestinian-American friends… all three of us are now being ordered by the FBI to go before a Grand Jury for going on that trip.”

There are hundreds, if not thousands, of Arab and Muslim students at UIC. How safe and nurtured can they be when one of the nine people on the Board is a man who prosecuted prominent Palestinian activists Muhammad Salah, who has U.S. citizenship, and Abdelhaleem Ashqar?

Fitzgerald’s office presented evidence extracted from Salah through torture in an Israeli prison, and allowed the Israeli torturers to testify without allowing the defense to hear the testimony, the infamous “secret evidence”.  Ashqar and Salah were acquitted of the terrorism-related charges.

Fitzgerald’s repressive legacy lives on, in the case of Palestinian activist, Rasmea Odeh. Rasmea is on trial in Detroit for allegedly failing to disclose an arrest in 1969 by the Israeli army during its illegal occupation of the West Bank. The U.S. Attorney in Detroit is using as evidence a confession that Rasmea signed that was gained through sadistic torture and rape by her Israeli captors.

Rasmea works in the same social service agency as Hatem Abudayyeh, one of the political activists raided at Fitzgerald’s direction. Her attorneys have made a motion that the federal case against Rasmea is “the product of an illegal investigation into … First Amendment activities,” because Fitzgerald’s office sent for her records from the Israeli government only after launching the grand jury witch hunt into the organizing efforts of us anti-war activists.

Fitzgerald is the one that should be kept away from our students, not Prof. Steven Salaita, who did nothing wrong.

A statement by Trustee James D. Montgomery, the only Trustee who supported Salaita’s appointment, would seem to agree with Iosbaker point about Salaita doing nothing wrong.  The UIC News article states that “Montgomery said he changed his mind after reflecting on his days as a student on the Urbana campus in the 1950s, when he protested housing discrimination. ‘I guess I was about as vocal as Dr. Salaita,’ he said. Montgomery said Salaita’s comments ‘were not in the context of the university or of the classroom,’ which should make it constitutionally protected and not ‘in the context of seeking employment at this university.'”

Ali Abunimah from the Electronic Intifada has also written an article questioning whether there is a cover-up among university officials concerning the pressure they were put under by wealthy pro-Israel donors to refuse Salaita’s appointment. “The University of Illinois at Urbana-Champaign says it cannot find a key document that may shed light on donor pressure and organized efforts to convince top administrators to fire Steven Salaita for his criticisms of Israel.” At a recent forum held in Chicago called “The Lessons of Gaza and the Tasks of the Movement Here”, Ali Abunimah commenting on his article saying that at a protest during the recent Trustees meeting he had “confronted Patrick Fitzgerald to ask him if he was going to protect the people who were doing the cover-up or represent the public interest.” Getting no response, he stated he has written to the former U.S. Attorney Pat Fitzgerald to ask how he responds to evidence of a possible felonious cover-up.

The Center for Constitutional Rights (CCR), along with the Chicago civil rights law firm of Loevy & Loevy, is representing Professor Steven Salaita because ” Salaita’s termination, which functions as a penalty for his speech on an issue of public concern, constitutes “viewpoint discrimination,” a violation of the First Amendment, and also threatens academic freedom by punishing a faculty member for speaking as a citizen on a critical issue”.

CAIR-Chicago along with the National Lawyer’s Guild – Chicago Chapter, and Palestine Solidarity Legal Support has also sent a letter to UIUC Chancellor Dr. Phyllis Wise urging her to reverse the decision.