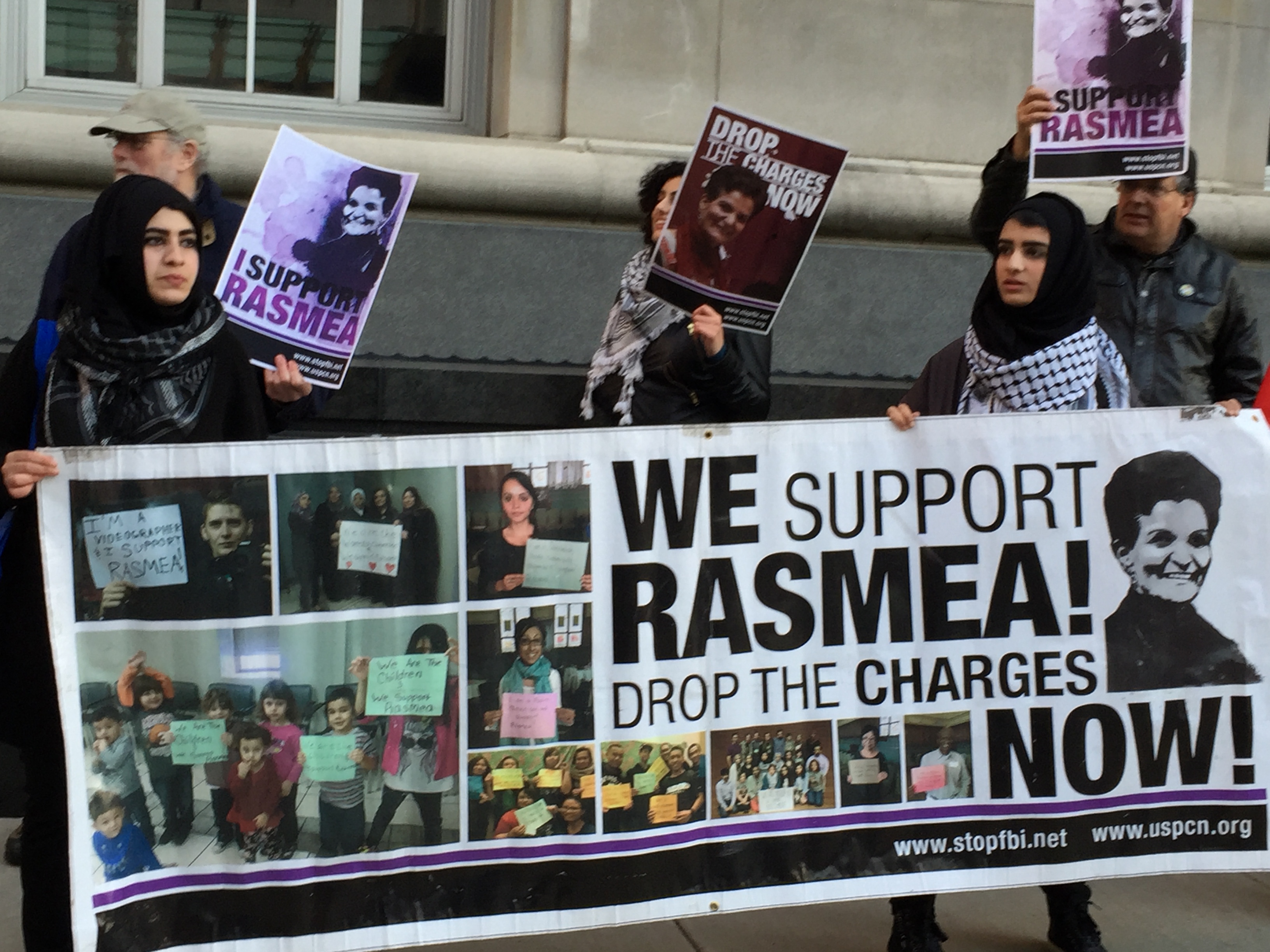 Once again the supporters of Rasmea Odeh came to Detroit for a hearing on her case. This time they had to be content with chanting with confrontational DHS police outside the courthouse and filling up the hallway outside the judge’s chambers during the closed hearing.

Yesterday, Rasmea Odeh, the Chicago Palestinian community leader charged with “immigration fraud” based on allegedly not mentioning on her citizenship application a conviction in an Israeli military court obtained through torture, had a hearing in front of U.S. District Judge Gershwin A. Drain. Judge Drain had been assigned to the case after her previous judge had reclused himself because of undisclosed Israeli business interests. (For background on the previous judge, see USA vs. Rasmea Odeh – New Judge, Next Hearing).

Supporters from Chicago, Milwaukee, Louisville, Grand Rapids, Flint, Dearborn, and Detroit gathered in front of the courthouse expecting to picket and chant as had happened multiple times before without incident. As soon as one of the group began to use a bullhorn, he was approached by Department of Homeland Security (DHS) police saying he had to move across the street because he was disrupting the court proceedings in the building. Hatem Abudayyeh, one of the leaders of the Rasmea Defense Committee, challenged the lead officer of the DHS police detail to produce “the statute” that said bullhorns had to be used across the street and not on the public sidewalk as had been done every other time before. The statute was never produced, but the protesters agreed to have the chants led from across the street. This interaction would be indicative of the attitude of the greater numbers of DHS police that day. The larger turnout of DHS police was also likely due to the over 100 protesters of the final phase of the City of Detroit bankruptcy case at the courthouse earlier that day. For those protestors who were fighting for public employee pensions and to stop the city from turning off water because of unpaid water bills, the DHS police had blocked off the street in front of the courthouse and seemed to have no problem with megaphones.

After chants of “DOJ let’s be clear, Rasmea is welcome here” and “When community leaders are under attack, what do we do? Stand up and fight back!” – Odeh’s supporters passed through the security checks and filled up the first floor hallway of the building only to find that Judge Gershwin was going to hold a private hearing in his chambers. The DHS police presence was also prominent within the building. While waiting in the hallway, one of Odeh’s supporters overheard a DHS policeman’s comment that “these people are pathetic, bringing all these people here for this case.”

After the closed hearing, Michael Deutsch, one of Odeh’s defense attorneys, reported that he had asked the judge to move the hearing into open court because of the many people who had traveled hours to be here. “He said that this was only setting dates and this was how he did it. He wasn’t hostile about it and just didn’t want to treat this case any differently than any other.” But as Deutsch pointed out, the judge knew this case was different than the others because of the effort of Odeh’s supporters to be there even for a short hearing. Deutsch reiterated that the situation is still much better with the new judge on the case than the old one.

The trial is set to begin on November 4 with jury selection.

After the report on the hearing, there were speeches from representatives of some organizations part of the Rasmea Defense Committee. Jess Sundin, representing the Committee to Stop FBI Repression (CSFR) described how “people are mobilizing around the country to fight this indictment of Rasmea”. CSFR sponsored a call-in day to the prosecutors coinciding with the hearing and Sundin described the “thousands who had made the call, filling up the prosecutor’s voice mailboxes”.

Frank Chapman, from the Chicago Alliance Against Racist and Political Repression, expressed the solidarity of his organization with the Rasmea Defense Committee. “On August 27, we sent a request to the DOJ for an investigation into 65 victims of police brutality in Chicago. Just like Rasmea, many of these were victims of torture.”

Michael Deutsch had the last word, “The judge knows now this is a big case, because all of you are here.”

The Rasmea Defense Committee including over 50 organizations, CAIR-Chicago being just one, will be organizing Odeh’s supporters to come out for both hearing dates on October 2 and 21 and for the start of the trial itself on November 4.