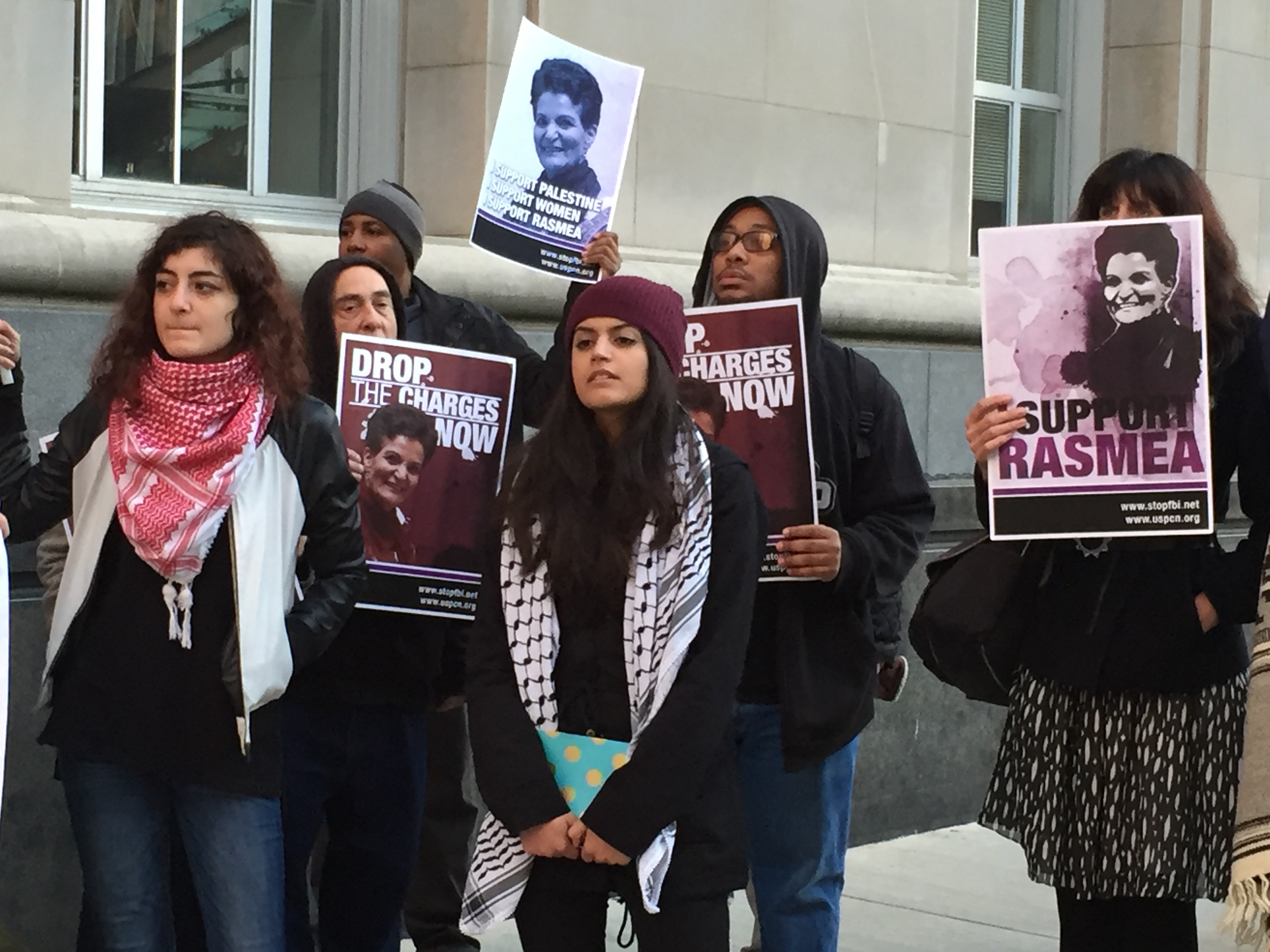 In a strange turn of events, prosecutors have accused the Rasmea Defense Committee, all of Odeh supporters, and the leader of a prominent Arab-American social services group of “jury tampering” and “almost certainly criminal” behavior by showing their support for a leader in the Chicago Palestinian community who has come under discriminatory indictment. The prosecution’s solution? Tamper with any jury that might be selected by demanding the jury remain “anonymous” so that they can be prejudiced to believe Odeh is a dangerous terrorist.

On October 3, federal prosecutors in the case of Palestinian-American leader Rasmea Odeh filed a motion in the U.S. District Court in Detroit to “Empanel an Anonymous Jury and to Take Other Measures Necessary to Ensure an Untainted Jury”. These “measures” include keeping the names of the jurors secret from the defense attorneys and “partial sequestration, in which instead of arriving at the Courthouse on their own each morning, the jurors will be directed to meet at an off-site location to be determined by the Marshal and driven to the Courthouse garage, thereby not requiring jurors to cross through a protesting mob [bold italics added] which is seeking to influence the proceedings.” These procedures would be more appropriate for the trial of a Mafia boss and communicate to the jury that their lives may be in danger by a “protesting mob” supporting Odeh. The description of peacefully protesting Arab, Palestinian, and Muslim majority supporters of Odeh as a “mob” not only suggests her supporters are threatening, but is also an example of racist profiling against Arabs and Muslims. Also implied is that there is something wrong about First Amendment protected actions outside a courthouse to support someone only charged with a crime.  Later in the document, the prosecutors call these actions including supporters attendng the hearings and trial, and making phone calls to the prosecutor’s office “almost certainly criminal”. Using the prosecutor’s logic, this would criminalize any group who protested outside a courthouse, attended a trial, or called the prosecutors office to show support for a defendant.

The motion also singles out Hatem Abudayyeh, Executive Director of the Arab American Action Network (AAAN) and a number of community groups for organizing opposition to Odeh’s indictment.

“Since defendant’s indictment, Hatem Abudayyeh has engaged in a concerted effort to improperly influence the criminal proceedings before the Court. Specifically, through the aid of the AAAN (www.aaan.org), as well as the Committee to Stop FBI Repression (CSFR) (www.stopfbi.net) and the U.S. Palestine Community Network (USPCN) (www.USPCN.org), Hatem Abudayyeh has organized a campaign designed to improperly sway the jury that will be empaneled to hear this case.”

The prosecutors are also trying to criminalize individuals and organizations who work together to defend a community leader unfairly targeted for prosecution. This is typically what is called “community organizing”.

So why is this happening to Odeh and her supporters?

First, we can get some clues by the harassment of Odeh’s supporters by Department of Homeland Security (DHS) officials during the last two court appearances. All of Odeh’s earlier court appearances showed a great deal of cooperation between Odeh’s supporters and the DHS security detail. But on September 2, DHS security pressured the protesters to move themselves and their bullhorn across the street from the courthouse. Even though they could not produce any legal document showing that was required, the Odeh supporters did move the bullhorn across the street. At the last hearing on October 2, DHS security once again pressured the supporters to take their bullhorn across the street and after the hearing refused to allow the defense attorneys to speak to supporters even without a bullhorn on the public sidewalk in front of the courthouse. For both of these hearings, Odeh’s supporters were cooperative with security and have attended all of the open hearings with no disruption whatsoever.  A potential reason for this change toward Odeh’s supporters would be the level of attention the Odeh case has attracted. Phone lines of the U.S. Attorney and prosecutors have been flooded with calls and Judge Borman reclusing himself from the case point to the prosecution being rattled by a “simple” case becoming a significant media issue.

But additional attention paid to Odeh’s case is not enough for prosecutors to take such a drastic action of asking for an anonymous jury.

The prosecutors are doing everything they can to paint Odeh as a “convicted terrorist” and all those who protest her arrest as dangerous supporters of terrorism who cannot even be trusted to know the names of the jurors. At the October 2 hearing, the court considered the defense motion to dismiss the charges against Odeh based upon her being singled out and selectively indicted for First Amendment activity. In court, Michael Deutsche, one of Odeh’s defense attorneys, argued that Odeh’s years as Deputy Director of the AAAN, providing services for immigrants, Arab women, and youth in the community; living an award-winning, exemplary life with no arrests in the U.S. for over twenty years gave the government no reason to single her out for prosecution. The prosecution’s response was “all we have here are allegations of discriminatory prosecution, but no evidence. The defense has to show a similarly situated person – someone jailed for terrorism [bold italics added] able to obtain their citizenship in the same way.” Deutsche’s rebuttal was that “the government is fond of mentioning terrorism. The defendant was not convicted of terrorism, but was jailed by a military occupation court based on a confession coerced through torture and rape.” The motion was denied by the court as it “did not meet the evidentiary requirement.”

The prosecution in this case wants to continue to portray a 67 year-old, Palestinian-American community leader as a dangerous terrorist who can’t be allowed to remain in this country, a story supported by the media coverage. The Associated Press coverage of the October 2 hearing was widely picked up by the media. Today’s story in The Washington Times  “Trial set for immigrant convicted in Israel deaths” is a good example.  The focus of the headline, as well as the article is on Odeh being an immigrant (she has been a U.S. citizen for 20 years) and her conviction for killing Israelis. The first portion of the article states “A federal judge refused Thursday to dismiss charges against an Arab activist accused of failing to tell U.S. immigration officials in Michigan that she’d been convicted in a fatal terrorist bombing in Jerusalem.” Any discussion of the conviction taking place 45 years ago in a military court and based on a confession obtained through torture and rape is mentioned far below in a single quote from a lawyer.

Just as the media doesn’t want to discuss the evidence of Odeh’s conviction using torture in an Israeli military court, it seems the judge in the Odeh case also doesn’t want this issue discussed at any length.  During the October 2 hearing, Judge Drain acknowledged that this is a “complex issue”,  but still only granted  ten minutes to each side to discuss the defense motion to admit expert testimony to Odeh’s suffering from PTSD as a result of her experience in the Israeli prison. Judge Drain stated he would rule on this motion within ten days.

In the Odeh case, it seems to be the federal prosecutors who are tampering with the jury by wanting to make them anonymous and enter the courtroom through the courthouse basement to avoid the “protesting mob” of mainly Arab and Palestinian women supporting a community leader unjustly targeted by the U.S. government. With this motion, the prosecutors are clearly attempting to prejudice any jury selected to believe Odeh is a dangerous terrorist who doesn’t belong in this country instead of a Arab and Palestinian community leader who has survived a military court conviction through torture and rape forty years ago. It is useful to remember that this is the same U.S. government who just last week was reported to have spied on Palestinian-Americans since 2009 and passed their personal data to an Israeli spy unit who used the data against their relatives in Israel and the occupied territories.

The Rasmea Defense Committee issued a statement that said in part:

“We see these threats as a sign that our campaign to defend Rasmea Odeh is working…There are now thousands of people across the country engaged in organizing for Rasmea. We will not allow the government to intimidate us. This attack will bring more supporters and strengthen our work further. We will redouble our efforts to make sure the charges against Rasmea are dropped!”

There is another hearing in Detroit scheduled for October 21 with the trial set for November 4.