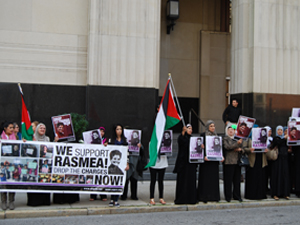 A 67 year-old award-winning leader of the Arab and Palestinian immigrant community who came here 20 years ago; developed programs supporting women’s rights; has never been arrested or charged with a crime in the U.S.; is indicted for allegedly “lying” on her citizenship application about being convicted by a military court using a confession obtained through torture and sexual assault. Now try to imagine this scenario happening if this remarkable woman was from Cuba, Venezuela, Iran, Russia, China, or any other country with whom the U.S. has less than friendly relations. But in this case, she is Palestinian and the country where her rights to a fair trial, as a prisoner, and as a woman to be free from abuse were violated – was Israel.

From the very beginning, Rasmea Odeh’s case has been about her status as a Palestinian immigrant in America. After her release from ten years in an Israeli prison, Odeh worked for the next thirty-five years for Palestinian and women’s rights in Jordan, Detroit, and now in Chicago as the Associate Director and Community Adult Women Organizer of the Arab American Action Network. Odeh’s immigration story is a woman who left her home country because of political repression, unjust imprisonment, and torture; came to Jordan and then the U.S. to build a life of service to the immigrant community. That life included degrees in Economic and General Administration, and Law; work as a teacher and  lawyer with women’s and workers’ unions, family and domestic violence groups, human right centers and the Red Cross. If Odeh was any other immigrant leader with this record of service, she would be given an award – which she was “Outstanding Community Leader Award” from the Chicago Cultural Alliance  in recognition of her devotion of “over 40 years of her life to the empowerment of Arab women” – but wouldn’t be threatened with the revocation of her citizenship, ten years in prison, and deportation.

But now recent rulings in her case threaten to erase her story as a Palestinian immigrant – replacing it with the story of the Palestinian “terrorist”. With only a week before the scheduled date of her trial, the Electronic Intifada reports that multiple defense motions that would enable Odeh to have a fair trial have been denied. The most important decision was US District Judge Drain’s determination that the defense would not be allowed to present any evidence about Odeh’s torture and sexual assault that ended with her coerced confession and conviction by an Israeli military court. “By precluding from the trial any mention of torture, the court has gutted the heart of Rasmea’s defense and makes a fair trial impossible,” Odeh’s lead attorney Michael Deutsch told The Electronic Intifada.

At the last court hearing on October 21, the defense used an internationally recognized, impartial expert on survivors of war trauma and torture, Dr. Mary Fabri, who told the court that Odeh suffers from “chronic” Post-Traumatic Stress Disorder (PTSD) and did so at the time she filled out her citizenship application.  Quoting from a statement of the Rasmea Defense Committee,

Defense attorneys Michael Deutsch and Jim Fennerty contend that the PTSD prompted Rasmea to assume that the questions were addressing her time in the U.S. “I found her to be very credible,” Fabri testified. “As a torture survivor, you develop strategies to live everyday life. Those filters cause you to narrow your focus. She would look at [these questions] with a narrowed filter and a narrowed focus of timeframe.”

When challenged by Assistant U.S. Attorney Jonathan Turkel about whether the filter can be controlled, Fabri added, “No, it’s not something you control. It’s automatic.”

Fabri’s testimony is critical to Rasmea’s defense, which argues that the government has to prove “specific intent,” that she willfully lied on her immigration application for the purpose of gaining citizenship.

Dr. Mary Fabri has worked with torture survivors for more than 25 years; was Senior Director of Torture Treatment Services and International Training at Heartland Alliance Marjorie Kovler Center in Chicago for 12 years; served as President of the National Consortium of Torture Treatment Programs for 5 years and has been on the Board of Directors of Torture Abolition & Survivors Support Coalition (TASSC) since 2005 and is currently serving as the Chair.

In response to Dr. Fabri’s extensive experience treating victims of torture, the prosecution was planning on using Matthew Levitt, Director, Stein Program on Counterterrorism and Intelligence at The Washington Institute for Near East Policy, a pro-Israel think tank connected to the American Israel Public Affairs Committee (AIPAC), to testify against Odeh. Levitt has also been a counterterrorism intelligence analyst at the FBI – an agency with a long record of profiling and surveillance against the Arab, Palestinian and Muslim communities. The prosecution approach was to ignore Odeh’s conviction by confession under torture so that a “terrorism expert” with a pro-Israel bias would be adequate as an expert to rebut Dr. Fabri’s testimony. The prosecution was once again attempting to make this case about “terrorism” and demonstrated a political agenda of suppressing not only Palestine activism, but also any political activism on the part of the immigrant community.

Now there will be no expert witness testimony from either side. Judge Drain did decide that any reference to Odeh as a “terrorist” or that she was involved in “terrorist activities” will not be allowed because it would “prejudice the jury.” But at the same time, the judge is allowing the specifics of Israeli accusations against her including information about the 1969 Jerusalem bombings she confessed to under torture. Clearly this will give the jury the impression she was convicted for terrorist activities. If the judge had allowed expert testimony from both sides, the prosecution would have used a pro-Israel counter-terrorism expert to label Odeh a terrorist for the jury. Now the prosecution will be able to present Israeli government documents accusing Odeh of being a terrorist without the defense being able to present any evidence of Odeh’s unjust military court trial, her torture, or forced confession. These decisions demonstrate that a Palestinian story has little value or weight in a U.S. court, but an Israeli story does.

Criminalizing Odeh’s Palestinian story has been part of the case from the very beginning.

Her case was initiated in 2010 when prosecutors investigating 23 anti-war and Palestine activists for a grand jury looking into “material support for terrorism” requested Odeh’s records from Israel. Odeh was never subpoenaed during that investigation. Only after all 23 people refused to testify and the government failed to find evidence of any wrong doing was Odeh indicted in 2013 for answers she made on citizenship papers 16 years ago. The court refused to grant the defense motion to dismiss that described the indictment as “the product of an illegal investigation into the First Amendment activities of the Arab-American Action Network (AAAN) and intended to suppress the work of the defendant in support of the Arab community of Chicago.”

Throughout Odeh’s court hearings, there have been multiple events suggesting a political persecution of the Arab immigrant community leader.

The original judge on the case, Judge Brennan, refused to step down when challenged over his pro-Israel fundraising by the defense, but was forced to do so when even he could not ignore his family having financial holdings related to Odeh’s original charges in Israel. The prosecution accused the Rasmea Odeh Defense Committee and Odeh supporters of “jury tampering” and “almost certainly criminal” behavior by showing their support for this leader in the Chicago Palestinian community.  They  characterized Odeh’s supporters (the majority women immigrants) as a “protesting mob.” For these reasons, they requested that there be an “anonymous jury”. The new judge on the case, Judge Drain refused to approve an anonymous jury, but still required “partial sequestration” for the jury to keep them away from Odeh’s supporters outside the courtroom.  In his decision, he also warned them “from wearing inappropriate attire if they enter the courthouse, such as t-shirts with ‘free Rasmieh’ emblazoned on them” and to comply with the restrictive City of Detroit code on noise prohibiting “any person from unreasonably disturbing the public peace and quiet by shouting…or by the playing of any device, equipment, or instrument that amplifies, produces, or reproduces sound, in any public or private place.” Odeh’s supporters in front of the courthouse will need to be seen, but not heard.

As with the case of the 23 anti-war and Palestine activists, the federal government miscalculated the level of support for people whose activism is being criminalized. In that case, there were hundreds of statements of support from faith-based groups, unions, and human rights groups who saw the investigation as an attack on freedom of speech and the right to protest U.S. foreign policy. The same trend was gathering momentum in the Odeh case. The most recent example is the statement from over a hundred feminist scholars who “call on Obama to drop the torture-based charges against Rasmea Odeh”. The statement accuses the government of targeting her “activism on behalf of Arab and Muslim immigrant women living in poverty in Chicago.”

As feminist scholars, we call on the Department of Justice to drop the charges against Rasmea Odeh. We extend our deepest support to Rasmea in the face of injustice. We recognize her as a leader in the international struggle to empower women and end violence against women…Rasmea built the Arab Women’s Committee and its base of nearly six hundred Arab immigrant women from scratch when she went door to door as a recent immigrant herself and made phone calls to house-holds with Arabic-speaking names from the white-pages. She developed an infrastructure for disenfranchised Arab immigrant and refugee women to obtain social services and support and she established English as a Second Language courses through which immigrant women perform plays, write their immigration stories, and form deep friendships, sisterhood, and solidarity. Because of Rasmea’s work, immigrant and refugee women who came to the US from countries facing war and political crises–like Iraq, Palestine, Yemen, Syria, and beyond—now have a place to seek support, gain empowerment and community, and call their home.

Rasmea’s story encompasses some of the most urgent feminist struggles of our times– violence against women and the use of sexual violence as a tool of colonization and war; the impact of racism and anti-immigrant policies upon women; the criminalization of women of color; and the use of intimidation to thwart feminist activism.

The prosecution is not only trying to erase Odeh’s story of a Palestinian immigrant fighting for the rights of her community, but also the story of a Arab woman resisting racism and the use of violence against women of color.  During a time when Arabs and Muslims are being targeted in an increased atmosphere of Islamophobia and media focus on the “war on terror”; when more immigrants are being deported  than any time before; and government surveillance is conducted over increasing numbers of people, the U.S. Justice Department is criminalizing a women’s rights leader in the immigrant community with the message not to promote those rights if they are perceived to conflict with U.S. foreign policy.

Although the defense team has requested a delay, Rasmea Odeh’s trial is scheduled to begin on November 4, election day across the nation. For the people in the Rasmea Defense Committee, the presence of supporters in the courtroom will be the most important vote to make that day for immigrant rights, human rights, women’s rights, and the right to a fair trial wherever you are from.