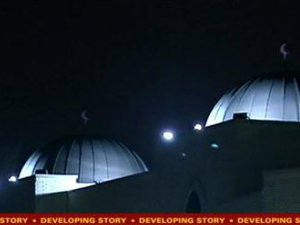 Two men who had made threats on FaceBook alluding to shooting and killing Muslims at the Mosque Foundation in Bridgeview, a suburb of Chicago, were released on Friday by local police after turning themselves in. The local media only reported that the men were questioned by the Bridgeview Police Department and the FBI, but never explained why after such serious threats they would be released without charge. Why were men who made threats causing the local police to have regular patrols of the mosque, school, and surrounding community released?

The original threats, discovered last Sunday, involved two people messaging back and forth on Facebook, identifying the location of the Bridgeview mosque.  The Mosque Foundation’s vice president, Oussama Jammal, was quoted as saying the FBI and local Bridgeview Police immediately got involved after a screen shot of the conversation was provided.

They were talking about killing people – you know, an eye for an eye, a tooth for a tooth – something of that sort. That’s the specific words that have been said. So that is serious, that is not someone who is just saying, ‘I don’t like them, I hate them.’

NBC News reported that the messages started as a status update on Facebook and threatened to put local Muslims “in check” for the actions of extremist followers of Islam on the other side of the globe.

“F****** Muslims burn down christian churches in France! We got to start breaking some rules putting these n****** in check,” one message said. While the post started as a generalized threat against Muslims, discourse grew more specific in subsequent comments.”I’d like to start with that mosque down the street . . . Eye for an eye tooth for a tooth,” another message said. Later someone else chimed in: “Haha . . . yep . . . maybe we should walk down the middle of the street without a worry in the world like they do shootin every one of them!!!!” Eventually it was suggested that the two target a mosque near 87th and Harlem, according to the posting. The mosque near that intersection is the Mosque Foundation in Bridgeview.

On Friday, the men turned themselves into the Bridgeview Police Department, and were interviewed by the local police and the FBI and released. ABC News reported that upon leaving the station, one of the men said to a reporter “The threat was not real, I was never going to do that, it was all fake.”

On Saturday, The Chicago Monitor interviewed Bridgeview Police Chief Walter Klimek on the puzzling question of the men not being charged and about the still ongoing investigation.

The men who turned themselves in are considered only “persons of interest” in the case. After the interview, the FBI determined that “no federal crime had been committed” and that for the men to be charged with a hate crime “another criminal offense was needed to accompany it.” Making threats against Muslims and a mosque on social media would need to be linked with some crime involving following through on those threats. The FBI is doing no further investigation and has left the case up to the local police. Chief Klimek explained that one of his detectives will be going to a grand jury on Monday to obtain a subpoena for six months of FaceBook records of the “persons of interest,” but it will take two to three weeks to get them back. Although the men were not charged and do not have a record of this type of behavior, Chief Klimek was taking the threats seriously and was keeping regular patrols out for the mosque, school, and surrounding community.

So this brings us back to the fact that in the U.S. unlike France, Canada, Germany, and a number of other nations, there is not a law against “hate speech.” So someone can threaten to shoot Muslims at the Mosque Foundation or be Fox News host Jeanine Pirro who called for mass murder of “Islamists” by other Muslims who we would “arm to the teeth,” and as long as they don’t actually shoot someone, they have not committed a crime. In the case of the Fox News anchor, they will not  be questioned by the FBI nor will they lose their job.

Hate crime laws punish violent acts, e.g. assault, murder, bombing, property damage, that targets a person or group based on attributes such as gender, ethnic origin, religion, race, disability, or sexual orientation. The U.S. has a federal hate crime law that was updated in 2009 by the Obama Administration. As Benjamin B. Wagner, U.S. Attorney for the Eastern District of California explains

The Shepard Byrd Hate Crimes Prevention Act increased penalties for violent hate crimes, broadened and simplified federal jurisdiction, and for the first time recognized certain violent acts directed at individuals because of their actual or perceived sexual orientation as federal hate crimes. The Shepard Byrd Act provides investigators and prosecutors with important new tools to deploy against hate crimes. Before the passage of the Shepard Byrd Hate Crimes Prevention Act in October 2009, there was no single federal hate crime statute, and prosecutions were based on a variety of civil rights statutes or other violent crime statutes.

But even with these enhancements to the U.S. federal hate crime law, it would not stop someone from just making online or any media threats against Muslims or any other targeted group. What would stop this?

Hate Speech laws prohibit  name-calling, verbal abuse or expressions of hatred, incitement to violence that targets a person or group based on attributes such as gender, ethnic origin, religion, race, disability, or sexual orientation. The U.S. has no laws against hate speech. But Canada, for example, does. 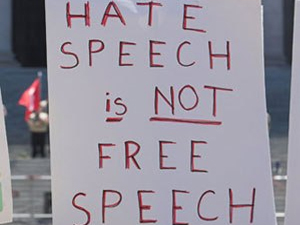 Canada – a country that has less of a violent history of hate speech against Native Americans, Catholics, Irish, Japanese, Germans, immigrants, African-Americans, Latinos, Arabs, and Muslims than the U.S. – has hate speech legislation. Under the current Canadian criminal laws, anyone found guilty of inciting hatred against an identifiable group — which the Criminal Code
(Sections 318-320) defines as “any section of the public distinguished by colour, race, religion, national or ethnic origin, age, sex or sexual orientation” —  can be penalized by a fine or sentenced to up to two years in prison.

There are limits and exceptions on the application of the Hate Speech law that include:

In Canada, as in the U.S., hate speech laws are controversial and have been accused of unfairly limiting freedom of expression. David Butt, writing last week for the Global Mail about the Charlie Hebdo trajedy, describes the utility of the Canadian Hate Speech law even though it is rarely invoked.

One glimmer of the law’s utility might be seen in the decision by many Canadian media outlets not to re-publish the offending Charlie Hebdo cartoons, despite being sincerely awash in “Je suis Charlie” sentiment. Our Supreme Court suggested the hate speech law has symbolic value such that even without being invoked, it silently validates a national ethic of multicultural accommodation and respect; and in the decision by Canadian media not to re-publish the cartoons, that very ethic can be seen in action. So it may be that our hate speech law was a silent point of resonance with the values, not the legal obligations, that motivated the media outlets who chose not to publish.

It’s past time to have a debate in this country over passing a Hate Speech law that could not only protect the multiple groups targeted by hate speech not only including Muslims and Arabs, but also Jews, African-Americans, Latinos, the LGBT community, and many more. A law that “silently validates a national ethic of multicultural accommodation and respect” and has the Canadian safeguards protecting freedom of speech would be welcome at a time when men on FaceBook or a host on Fox News can advocate killing Muslims without fear of repercusion.