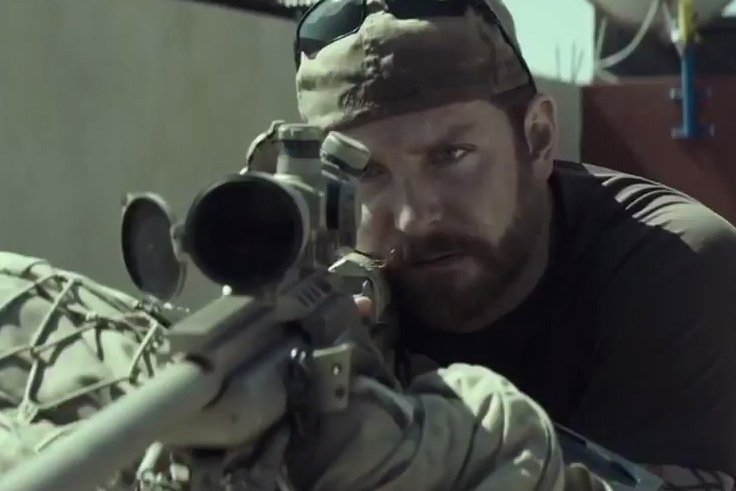 The Chris Kyle played by Bradley Cooper in American Sniper was not a drone operator, but he had the same mentality of killing terrorists from a distance. As the very first sound you hear in the movie, “Allah Akbar” proclaims, these terrorists are Muslim. WARNING: PROPAGANDA SPOILERS!

After the Muslim call to prayer, the next scene demonstrates these “savages,” as Chris Kyle calls them, don’t value the lives of their children. His first kill takes place in an unnamed Middle Eastern city that lies in ruins. Streets are deserted except for the advancing Marines and their tanks. From a rooftop, Kyle sees a young woman in a long black headscarf with a small boy suddenly emerge from a building and walk toward the Marines. The opening establishes the film’s narrative. This could be any Muslim country in the Middle East, being suspicious of all Muslims will be what keeps you alive, and these “savages” will all be identified as terrorists. Kyle’s enemy in the film is Al-Qaeda in Iraq – the precursor to ISIS. Last weekend’s broad release for American Sniper was fortuitous for Clint Eastwood, the director, and his “Dirty Harry” politics. It was the weekend after the attack on the Charlie Hebdo office in Paris and multiple arrests of suspected terrorists across Europe. For sold-out American audiences, Kyle easily steps into the role of the American hero killing these Muslim “savages.”

To make sure the viewer understands that Kyle will be shooting animals, the Iraq scene cuts away to Kyle as a young boy hunting deer with his father saying “You are going to make a fine hunter some day.” The hunting scene dissolves into a young Kyle listening to a minister sermonizing about the “clear vision of God” that can separate out the evil in the world. Kyle’s father explains those blessed with that clear vision – “There are sheep and those given the gift of aggression. These men are a rare breed. We protect our own.”

As the Bush administration linked the war in Iraq with Al-Qaeda and 9-11, the film relentlessly equates the insurgents in Iraq with the terrorists of Al-Qaeda. Kyle joins the Navy Seals after watching newscasts of the U.S. embassy bombings in Kenya and Tanzania in 1998. After he completes the gay bashing and “get going girls” taunts of the punishing Navy Seal training, he watches the first of the World Trade Center Towers collapse on TV. Soon he’s on “Tour One” in Fallujah.

Reminiscent of CIA drone policy that counts all military-age males in a strike zone as combatants, Kyle’s captain explains that “anyone of military age still here is here to kill you.” Fallujah is a wasteland of shattered buildings and deserted rock strewn squares. Because it would not fit the narrative being presented, the context of why the city was deserted, i.e. U.S. military demolished the city after insurgents killed four armed contractors. Kyle tucks a small copy of the Bible in his vest.

The scene returns to the young woman and her son from the start of movie. The woman in black hands a grenade hidden in her long headscarf to the boy who moves toward the American soldiers. Kyle’s first time “popping a cherry,” as a team member would describe it later, is the boy. His second kill is the woman who picked up the grenade from her dead son. The importance of these first kills would be emphasized as the only time Kyle would have a moment of regret. It also reinforces the image, repeated often in the U.S. military reports during the Iraq War, of the untrustworthy Iraqis who would use women and children in their battles against the Americans. But this is not how Kyle described it in his autobiography, American Sniper: The Autobiography of the Most Lethal Sniper in U.S. History. His first kill was a woman who did walk into the street with her son except that she kept the grenade and never handed it to her son. Kyle killed the woman to protect the advancing Marines, but not her son. The film makes a deliberate choice of turning the woman into a monster who is using her own son as a suicide bomber. 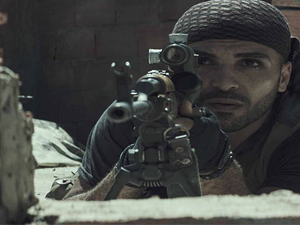 The next call to prayer we hear is the soundtrack to an Iraqi in a cab trying to ram the American troops. We are also introduced to the Iraqi sniper, Mustafa, who will dominate the rest of the film as Kyle’s nemesis. Killing him to avenge a friend’s death will be the reason Kyle finally goes home for good. Just like the critical first kill, this story is an invention by Eastwood. In his autobiography, Kyle says “I never saw him but other snipers later killed an Iraqi sniper we think was him.” (Kyle, 138). Without the relentless search for his counterpart on the Iraqi side, Kyle would be a sniper with 160 kills of “savages” to his name. Even with the heavy emphasis on his being a “hero” and “legend” – it would have made a less dramatic movie.

Mustafa, the Iraqi sniper, and the insurgents are consistently associated with Al-Qaeda in Iraq for the rest of the movie. Kyle is shown with the Marines watching a film on Al-Zarqawi, founder and head of Al-Qaeda in Iraq, being told by his captain that the search for Al-Zarqawi will be the “largest urban assault since Vietnam.”  The comparison to Vietnam may be accurate, but Kyle and the Marines searching for Al-Zarqawi is another fabrication for dramatic effect. Al-Qaeda in Iraq was certainly one group of insurgents Kyle spoke of in his autobiography, but they were only one among many.

Besides the Iraqi translator traveling with the company, the only “good” Iraqi we meet in the film is a sheikh threatened by Al-Zarqawi’s second in command, the “Butcher.” The Marines and Kyle are unable to protect the family and soon Al-Zarqawi’s men capture the sheikh and his son. To drive home their portrayal as “savages,” the Al-Qaeda insurgents threaten to use a drill on the head of the sheikh’s son unless he cooperates. Once again this incident does not exist in the autobiography and is placed in the movie to make a point. Dressed in black and acting with brutality, these Iraqis become ISIS without the beheadings – but that will come later.

More of this harsh, racist portrayal of Iraqis is reiterated in scenes of his second tour with the soldiers riding into another blasted, ruined city saying we need “to put the fear of God into these savages.” When one of Kyle’s best friends expresses the slightest doubt about why they are fighting, Kyle responds “You want these mother******s to come to San Diego or New York?” Once again there is a reminder that these soldiers are in Iraq fighting Al-Qaeda and not a complex multitude of different Iraqi insurgent groups. When Sunni tribes from Anbar province were successful in 2005 at fighting against Al-Qaeda, it merits no mention in the film and brief mention by Kyle in his book. He suggests this “Sunni Awakening” was inspired by the Marines brutal policies towards the insurgents.

In a crucial scene that establishes the Iraqi insurgents once and for all as brutal, ISIS-like killers occurs on Kyle’s second tour. The soldiers take over a house across the street where they believe Al-Zarqawi is hiding. The Iraqi head of the household is clearly not happy to have his house invaded, but welcomes the soldiers to an Eid al-Adha dinner. Eid al-Adha or “Feast of the Sacrifice,” is a major Muslim holiday commemorating Abraham’s willingness to sacrifice his son, Ishmael, as an act of submission to God. As every suggestion of Islam in the movie is followed by some treachery on the part of these Iraqi Muslims, so too is this holiday dinner shown to be a ruse. The attack on the “restaurant” where Al-Zarqawi is supposedly hiding is shown to be a torture chamber including a bloody man hanging from hooks in the ceiling to body parts including heads on shelves. Once again, all fighters escaping are dressed in black and Mustafa, the Iraqi sniper, is shown defending these fighters as they try to escape. Instead of being shown as a contest of equals, Kyle is the hero defending his men against an Iraqi sniper who is a defender of terrorists who torture their victims.

Unlike a drone pilot, Kyle does get directly involved on the ground with his men as the film progresses. But his attitude even up close is still that of a drone pilot – any male in the vicinity is a terrorist, is not a real human being, and is only a “savage.”

During his fourth and final tour, Kyle and the Marines are fighting the same sniper and the black clad group of Al-Qaeda in Sadr City, a suburb of Baghdad. Sadr City is the home of the Shiite Mahdi  militia, enemies of Al-Qaeda in Iraq. The Sadr militia also wore black, but details like this would distract from the “Al-Qaeda terrorists were the enemy in Iraq” theme of the film.

After avenging his friend killed by the Iraqi sniper, Kyle remains home after four tours. In real life, he returned home because of some health problems.  Al-Zakawi is never captured and the film moves on from that important mission. Kyle eventually agrees to help other Iraq vets in the VA hospital. In the film, he does not admit any remorse or even negative impact on himself of the four tours in Iraq. As he tells the VA psychiatrist, “it only haunts me the guys I didn’t save.”

To drive home the importance of Chris Kyle as an American hero, the original film of his hearse traveling down the freeway lined with people waving American flags and his memorial service at the Dallas Cowboys stadium run as the credits roll by.

Clint Eastwood focused the message of the film on Chris Kyle, the American hero who never wavered in his mission to kill as many Muslim terrorist savages in Iraq as he could. As Kyle would say in his autobiography

“Savage despicable evil. That’s what we were fighting in Iraq. That’s why a lot of people including myself, called the enemy ‘savages.’ There really was no other way to describe what we encountered there.”

Like the military in a previous U.S. war – Vietnam – it comes down to body count. One hundred and sixty “savages” killed in 1000 days.

Orientalism, Postcolonialism, and Whitewashing in the American Film Industry

Orientalism, Postcolonialism, and Whitewashing in the American Film Industry